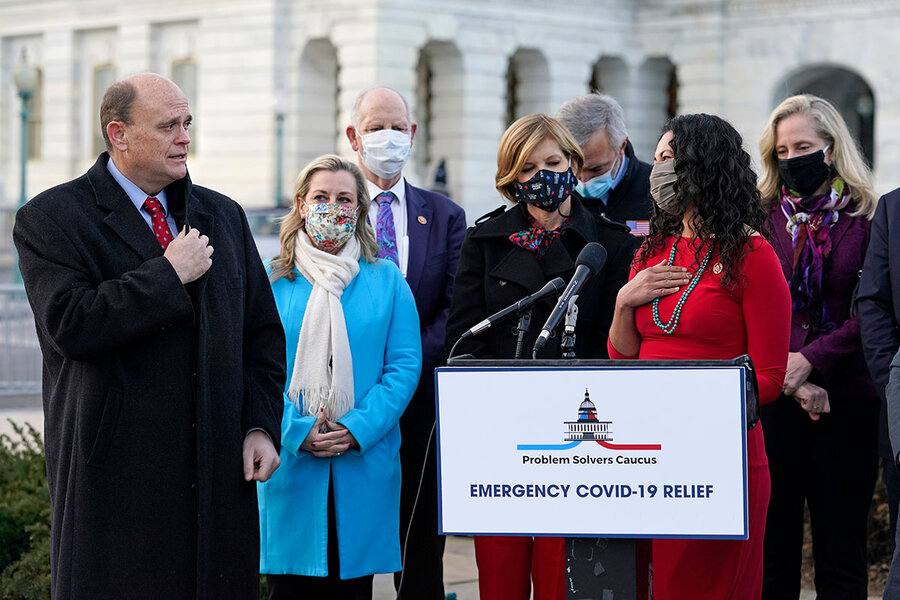 Sen. Rob Portman, an Ohio Republican, professes himself to have been “very pleased” with what President Joe Biden said in his inauguration address about Republicans and Democrats needing to work together to solve problems.

A week later, he’s waiting for those words to be put into action.

“I haven’t seen it, particularly with regard to the COVID-19 bill,” says Senator Portman, a member of a bipartisan group of senators who spearheaded a $900 billion relief package last month that passed 92-6. “It’s good to talk about bipartisanship. It’s much better to actually do it.”

On Jan. 14, the incoming Biden administration announced a $1.9 trillion pandemic aid package that would fund an accelerated vaccine rollout, put schools on a path to reopening, provide relief to small businesses and unemployed Americans, offer $25 billion in rental assistance, and send out $1,400 stimulus checks to most Americans.

Even moderate Republicans have balked at the price tag, pressing the administration on why the package includes stimulus payments to families making as much as $300,000, and calling for more targeted aid. With the national debt rapidly growing, they have also raised concerns about numerous other initiatives included in the package, such as spending more than $10 billion on cybersecurity after Russian hackers breached numerous U.S. government agencies last year, and raising the minimum wage to $15 per hour – a key policy goal of the progressive left.

Democrats, who hold a narrow majority in the House and a single tie-breaking vote in the Senate, are urging the bill’s immediate passage as an overdue remedy for millions of people affected by COVID-19 and the economic crisis. They say they cannot afford to let urgently needed relief be held hostage by political stall tactics.

“If you see somebody is just stalling and objecting for purposes of stalling and objecting, you say, ‘We are not going to make the urgent needs of the American people … secondary to some politician looking for a stall strategy,’” says Democratic Sen. Ron Wyden of Oregon. “I think President Biden is striking a good balance … between making it clear what his first choice is, which is to be bipartisan, but he also – because he’s been in the Senate and been vice president – understands when people are really stalling for stalling’s sake.”

The pandemic legislation is the first major test of how President Biden and his Democratic allies in Congress will put into practice his exhortations to unity, and how willing Republicans will be to work with them. Already, hopes for bipartisanship are waning.

At a time of deepening polarization, centrifugal forces are pulling lawmakers on both sides toward more extreme positions, and threatening to destroy some of the mechanisms that have long served to temper the will of the majority. As pressure grows to address the economic fallout of the pandemic, many Democrats feel they don’t have time to wait – or waste – trying to get Republicans on board for a deal that may never happen. Some are even pushing to get rid of the filibuster, which allows for extended debate in the Senate, in order to pass bills more quickly.

The filibuster stays – for now

The filibuster was first allowed in 1806, but has evolved over time. It was popularized in the 1939 film “Mr. Smith Goes to Washington,” in which an earnest young senator bent on blocking a corrupt appropriations bill speaks for 24 hours. In order to end such delays and move to a vote, 60 senators must agree to do so, in what’s known as a cloture vote. Defenders see the filibuster and cloture process as preventing a slim majority from ramrodding legislation through the Senate. Opponents argue it has led to undue obstructionism by the minority party.

“The filibuster helps to protect the rights of the minority party and defines the Senate as the world’s greatest deliberative body,” says Sen. Susan Collins, a Maine Republican who in 2017 co-authored a bipartisan letter with Democrat Chris Coons of Delaware and signed by 61 senators, urging then-Majority Leader Mitch McConnell and Minority Leader Chuck Schumer not to abandon the legislative filibuster. “It would be tragic if it were removed. And I believe that the Democrats would rue the day, eventually, should they pursue that route.”

For now, the filibuster looks likely to survive, thanks to two Democratic senators who have publicly pledged to keep it – Joe Manchin of West Virginia and Kyrsten Sinema of Arizona.

Senator Manchin says it’s a defining characteristic of the Senate, which was designed to temper the more tempestuous passions of the House.

“Get rid of the Senate then, if you don’t want [the filibuster],” he says. “Just make it unicameral and we’ll have one body.”

Senator Manchin spearheaded a 75-minute call between Biden officials and a bipartisan group of 16 lawmakers on Sunday, including Senators Portman and Collins.

Sen. Mitt Romney, a Utah Republican who was also reportedly part of the bipartisan group and called the Biden bill’s price tag “pretty shocking,” says Mr. Biden’s call for unity can be met in tone even if not always in substance.

Unity suggests “people that respect one another, that are willing to work with each other, that are open to different points of view,” he says. “I’m not surprised that a Democrat pursues Democrat issues, [and] Republicans like myself will fight for Republican issues – but we can do so with comity and grace and respect.”

Impeachment and fallout from the riot

The tumultuous weeks leading up to President Biden’s inauguration cast an early shadow over his calls for unity. Although Mr. Biden has stayed largely out of it, the Democratic push to impeach and convict former President Donald Trump, whom they blame for inciting an insurrection on the Capitol on Jan. 6, has dimmed hopes for bipartisan cooperation. In a procedural vote on Tuesday, the vast majority of Senate Republicans indicated they see an impeachment trial of a former president as unconstitutional.

Mr. Biden is also under pressure from the ascendant progressive wing of the Democratic Party. In the early stages of the presidential primaries and caucuses, Mr. Biden lagged well behind more left-leaning candidates. And although Democrats eventually coalesced around him in the effort to defeat Mr. Trump, he faces considerable pressure from the left wing of his party on a range of issues, from racial justice to climate change.

Above all, there is a growing frustration in Congress that efforts at bipartisan compromise have become less and less fruitful. After years of gridlock, some Democrats believe eliminating the filibuster might be the only way to achieve a functional legislative branch again – one that can tackle big problems and deliver results.

There are ways around the filibuster without flat-out nixing it. Budget reconciliation, which requires only a simple majority, would allow the Senate’s 50 Democrats plus Vice President Kamala Harris to push some legislation through without a single Republican vote.

Given the urgency of pandemic relief, Democratic senators say they may have no choice but to use reconciliation to pass President Biden’s $1.9 trillion bill if they can’t get enough Republican colleagues to support it.

When Republicans were in the majority, points out Virginia Sen. Tim Kaine, the GOP leadership also used reconciliation to achieve legislative priorities. That’s how Republicans passed the 2017 tax cuts, for example.

But if Mr. Biden’s opening salvo is achieved through budget reconciliation, after all his talk of unity and bipartisanship, that could early on sour his relationship with even moderate Republicans – especially coming on top of the Democrats’ push for impeachment, as well as Mr. Biden’s executive orders on everything from canceling the Keystone XL pipeline to including unauthorized immigrants in the census, which is used for apportioning representatives to Congress.

“Actions speak louder than words. You take a look at the executive orders he signed, there’s nothing particularly unifying about most of those,” says Sen. Ron Johnson, a Wisconsin Republican, who has also called on Democrats to call off the Senate impeachment trial of former President Trump. “They can’t win graciously. They were sore losers in 2016, and they were sore losers for four years. Now they’re sore winners.”

“A reflection of America”

After Tuesday’s procedural vote revealed that only five Republicans at most would potentially be willing to convict Mr. Trump in an impeachment trial, Senator Kaine raised the idea of a censure vote instead, which could get more bipartisan support. Majority Leader Chuck Schumer has insisted the trial will go forward.

Despite many in and out of Congress despairing about the decline in cooperation between the parties, Senator Kaine says it’s worth pursuing compromise where possible. He points out that he has seen it work under both Democratic and Republican leadership on committees like Health and Armed Services, both of which he has been a part of since 2013.

“I continue to think we should make the effort as much as we can, because the greater the buy-in on the Hill, traditionally, the greater the buy-in in the populace,” says Senator Kaine, who represents Virginia, where voters don’t register by party. “If it’s a narrowly divided bill on the Hill, then it tends to be narrowly divided out in the real world, too.”

In separate interviews, both he and GOP Sen. Kevin Cramer of North Dakota make the point that bipartisan cooperation still happens – it just doesn’t get as much attention as gridlock.

“One of the problems I think we have in America is that the unifying things that we do aren’t very sexy,” says Senator Cramer. “So unfortunately all America gets to see is divisiveness.”

“But I also have to say, some of the divisiveness that you see in Congress is a reflection of America,” he adds. “In fact, I would say there’s more unity within the United States Senate than there is out there in Realville.”

Even Senator Portman, who surprised many this week by announcing he would not seek reelection due in part to frustration over partisan gridlock, says he still thinks the kind of bipartisan cooperation he saw in December on pandemic relief is possible in the new Congress.

“In theory, it should work better with government even more closely balanced,” he says, “and a new president who claims he is – and I think he is – sincerely interested in trying to cut through the partisan gridlock.”

So why is he leaving if bipartisanship is possible?

“It’s possible, but do you see it happening? I mean, that’s the whole point,” he says. He walks toward a waiting elevator before turning back and adding, “I’m not leaving. I’m here for two more years. … I’m going to try hard to make that happen.”