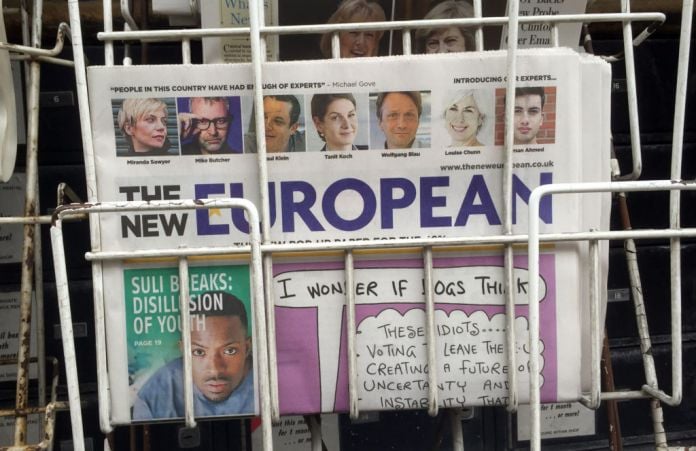 The New European, a weekly publication in Britain, has been snapped up from regional newspaper owner Archant in a management buyout backed by its founder.

Matt Kelly, who set up the title in 2016, has led the takeover alongside Irish media executive Gavin O’Reilly.

The move comes months after Archant, which owns the Eastern Daily Press, was bought by private equity firm Rcapital.

Mr Kelly said: “I’m very excited to lead this next, new chapter in the remarkable life of The New European, building on its success of the past several years.

“Since the referendum, The New European has shown that there is a significant market for high-quality, informative, provocative and entertaining journalism written for an audience who care deeply about both Britain and Europe’s future.

“With new investment capital in place and seasoned media investors, we have a very clear vision of how we can better enhance the experience for our readers and employ new innovations and product developments.”

The title, which was set up in the immediate aftermath of the 2016 Brexit referendum, has a retail, home subscription and digital circulation of around 20,000 a week, it said.

Mr O’Reilly said: “Europe is changing and we believe that The New European can continue to play a positive role in constructively debating the continent’s future.

“The New European is unashamedly Europhile to its core, but it puts the values of strong, independent journalism first; interrogating and questioning the institutions and forces shaping us.”