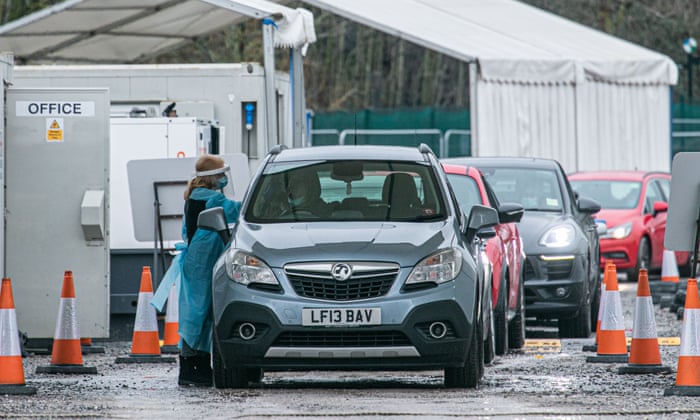 Tens of thousands of people will be tested in a door-to-door “two-week sprint” to halt the spread of the South African coronavirus variant as cases were found across England.

Squads of health officials, firefighters and volunteers have been established to deliver and collect PCR test kits door-to-door and mobile testing units will be sent to each area. Wastewater could also be tested to determined the prevalence of the strain.

The new South Africa variant, which is more transmissible than the original virus, appears to show a slightly “diminished” response to vaccines, and may eventually require a booster shot, Public Health England (PHE) said.

The health secretary, Matt Hancock, said that cases indicating community transmission were discovered in eight areas from Surrey in the south of England to Sefton in Merseyside.

Hancock ordered testing of around 80,000 residents in postcode areas where cases were found which did not originate from travel. He said the goal was to “stop the spread altogether of these new variants” and “bring this virus to heel”.

“If you live in one of these postcodes where we are sending in enhanced testing then it is imperative that you stay at home and you get a test even if you don’t have symptoms,” Hancock told a Downing Street press conference. “This is so important so that we can break the chains of transmission of this new variant.” He said it was “a stark reminder that the fight against this virus isn’t over yet”.

There is no firm research on the efficacy of the AstraZeneca vaccine against the variant, though laboratory research is under way, said Dr Susan Hopkins, PHE’s Covid strategic response director.

A briefing document on the response seen by the Guardian described the plan as “a two-week sprint” and said Hancock “has ordered an attempt at eradication of the new variant if at all possible”.

Eleven cases unconnected to travel were found in eight postcode areas, health officials announced. They are W7 in Ealing, N17 in Haringey, CR4 in Merton, WS2 in Walsall, ME15 in Kent, EN10 in Hertfordshire, GU21 in Surrey and PR9 in Merseyside and Lancashire.

They emerged from routine genomic screening of around 5% of positive PCR test results dating back to 18 December. Consequently they are likely to be just a fraction of the actual community transmission. Some 94 cases of the virus linked to travel from South Africa have also been identified.

Hopkins said that with the R value now under 1 “we can reduce these cases of the new variant”. But other scientists warned it may be too late to eliminate it. Prof Rowland Kao, chair of veterinary epidemiology and data science at the University of Edinburgh, said: “It is probable that it’s quite widespread if [we are] already seeing community cases across eight authorities. The surge testing will be more about slowing it down, than any absolute expectation that it will get rid of it.”

Success partially depends on the public complying with test requests and Gabriel Scally, visiting professor of public health at the University of Bristol, said: “This process is extraordinarily intensive and probably won’t succeed.”

The shadow home secretary, Nick Thomas-Symonds, described the developments as “deeply worrying”. “It shows the UK government’s quarantine system is not working with the country being exposed to dangerous strains of the virus and new cases now appearing,” he said. “While door-to-door testing is welcome … how can the home secretary justify keeping our borders open to Covid, allowing around 21,000 people to arrive every day?”

Direct flights from South Africa to the UK were banned from Christmas Eve but a plan for forced hotel quarantine, announced in January, has yet to be launched.

The briefing document on the “surge-testing” plan states: “There is now no evidence that this variant causes more severe illness, or that the regulated vaccine would not protect against it. Virus variation and mutation occurs naturally. The more we suppress new variants the more we will avoid variants which cause problems for treatment or vaccination.”

But one public health official questioned the approach of using postcode areas “because it assumes infected people don’t have contact with others outside the postcode”. They described the approach as “experimental” but said it could help develop a template for responding to future mutations of the virus.

Ruth Hutchinson, director of public health for Surrey, said door-to-door testing was “a precautionary measure – the more cases of the variant we find, the better chance we have at stopping it from spreading further”. “It’s really important to say that there is now no evidence that this variant causes more severe illness, so you don’t need to worry,” she said.

Door-to-door testing is set to start in Hertfordshire on Thursday. It has previously been used by authorities in high-infection areas such as the London borough of Redbridge, Leicester and Oldham.

Dr Alison Barnett, a regional director at PHE South East, said: “The most important thing is that people continue to follow the guidance that is in place: limit your number of contacts, wash your hands regularly and thoroughly, keep your distance and cover your face. If you test positive by any method, you must isolate to stop the spread of the virus.”