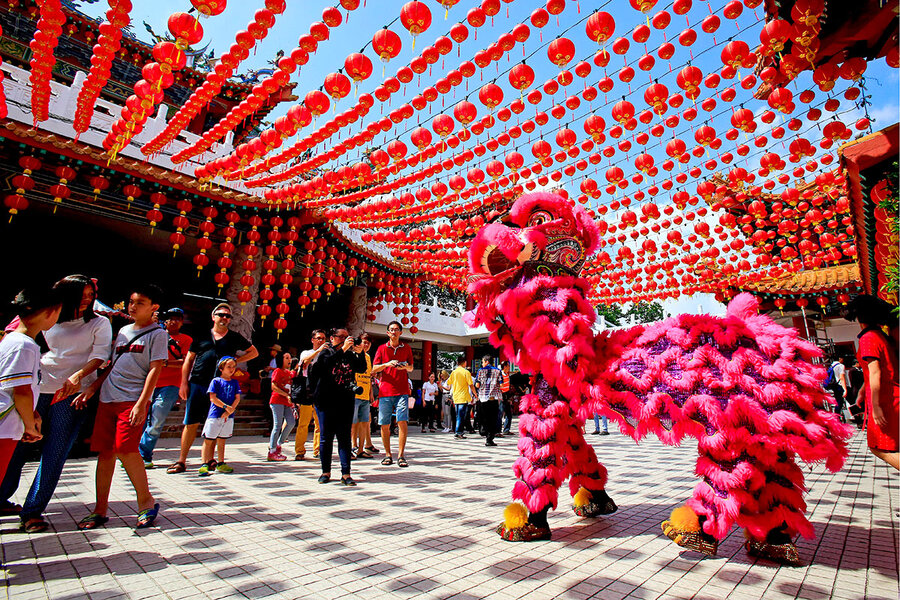 Siow Ho Phiew’s studio is tucked away in a quiet lane in an industrial area just outside Kuala Lumpur. It is easy to miss the unassuming sign outside: Wan Seng Hang Dragon & Lion Arts Workshop. But the inside – cluttered with dozens of colorful lion masks in various stages of production, paint bottles and brushes, piles of thin wooden strips – is anything but ordinary. Someone is twisting long rattan slivers into near-perfect circles to form the base frame; someone else is coating a thick layer of red lacquer on a massive lion head. A third craftsman is attaching yellow fur on top of an almost finished mask.

In a far corner, Master Siow, as he’s often called for his expertise, is quietly sharpening rattan sticks, even as he keeps a benevolent eye on his apprentices. At 65, he’s one of the most respected creators of lion head masks in Malaysia, where the Chinese community makes up more than a quarter of the population. If not for the pandemic, dancers hidden in these elaborate costumes would soon be moving fluidly down the streets to the sounds of clashing cymbals and throbbing drums, casting out evil spirits and summoning good luck for the Lunar New Year, which begins Feb. 12.

A self-taught artisan, Mr. Siow has been making lion heads since 1986, after spending a decade as a lion dancer. His daughter Siow Hui Qing translates his rapid-fire Mandarin as he recounts how he started making costumes himself.

Importing from China, he found high prices for low quality. “Bamboo is not so robust and breaks easily, so I changed it to rattan that is more flexible and lasts longer” – strong enough to protect the acrobatic dancers, and supple enough to form the masks’ fluttering ears and eyelids. At first, he only made masks for his own use, but his reputation soon spread within the country and then abroad.

“Now I export to many other countries, including China,” he laughs.

Indeed, his stunning lion heads have patrons from as far away as Australia, France, and the United States. The workshop produces more than 300 annually, but this pandemic year has been a lean time for business, says Ms. Siow.

Chong Fui Dick, a longtime client and lion dancer in Kuala Lumpur, says the workshop’s quality is unmatched. Mr. Siow “understands customer demands and meets them perfectly – even when I want a different design, something totally new, like a mask in black and blue,” he says with a laugh.

Lion dances started during the Han dynasty, around 200 A.D., and were brought into Malaysia by immigrants more than a century ago. For Mr. Siow, it’s an integral part of Chinese culture here. Making lion heads and teaching the dance – he has students coming from all over the world for both – is his little contribution to keeping the traditions of his community alive.

In addition to Lunar New Year, the dances are also performed at temple ceremonies, weddings, corporate events, and competitions, where daring lion dancers prance and leap atop long poles, symbolically reaching greater heights. Each lion consists of two dancers, one acting as the head and the other bringing up the body, or the flowing tail. To the master craftsman, it is a test of not just skills, but also grace and discipline.

“For a lion dance performance to come together, many things are important: not only the beauty of the costume, but also the harmony between the dancers, as well as the music and expressions,” he says.

Wong Siong Loong, age 29, has already been learning from the master for more than 10 years. “I think being a dancer has improved my skill as a mask-maker, because I know the needs of the person using this,” he says, pointing to the wooden frame in his hands. “You know how some people can’t live without football? I need this for my happiness.”

While the workshop looks like an efficient assembly line, every artist knows the nuts and bolts of the entire process. Creating a new head takes seven to 10 days, starting with a skeleton of rattan sticks. The joints and ear and mouth flaps are molded with wire before the frame is wrapped in resin paper. Then come the painted designs that give the lion its unique personality, then a coat of glossy lacquer, and then fur, ribbons, and pompom balls. Finally, the head is attached to the long train that forms the fluid body of the lion.

The most traditional motifs are taken from “Romance of the Three Kingdoms,” an influential 14th-century text about the Han dynasty. A yellow lion with a white beard indicates the warrior Liu Bei, considered benevolent and righteous, and a red lion with black beard, the brave and loyal Guan Yu. However, nowadays there are not just classic reds and yellows, but also shocking pinks and electric blues, as well as novel patterns – even clients’ brand names. “Each color and design used to have a symbolic meaning, but now clients want modern things …” Mr. Siow says, his voice trailing off wistfully.

“This is not just my job; this is my passion,” he finally says. And as far as he is concerned, flashy colors or not, the lion dance tradition has survived the test of time, and will never die. And he will continue doing his bit to help it thrive.