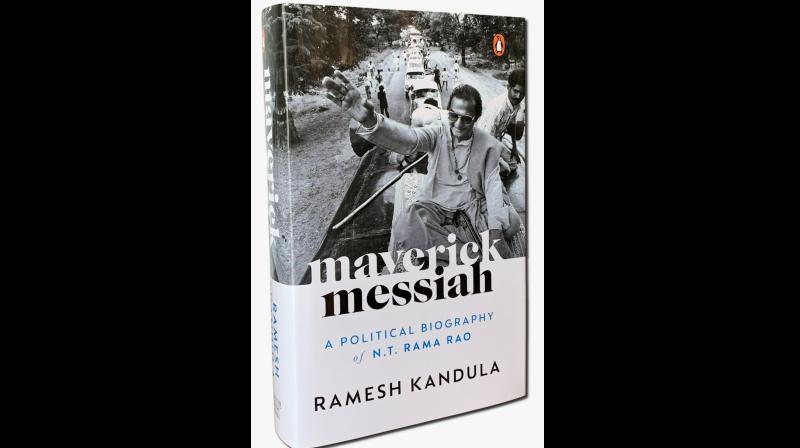 Hyderabad: A recently launched biography of the late N.T. Rama Rao, titled 'Maverick Messaiah', written by journalist Ramesh Kandula, chronicles and analyses the political life of NTR and its impact on both the state and the nation. An objective assessment of the late leader, the book has been well-received for its critical insight and diligent research.

What set NTR apart from later day movie stars entering politics? Is the Telugu Desam a Kamma party meant to empower the community and is it dying? In this two-part interview with Sriram Karri, author Kandula defends the party and explains what set NTR apart.

Why did NTR remain the last real actor phenomenon to achieve political success? Tamil superstar Rajanikant has now announced he won’t enter politics, while Chiranjeevi and Pawan Kalyan had great fan networks but could not convert them into political parties that could debut with electoral wins.

Film actors who entered politics in the past, especially M.G. Ramachandran (MGR) and later on, N.T. Rama Rao (NTR), had a strong artistic urge to connect with the people. The social bonding they enjoyed with their audiences was qualitatively different from actors who strayed into politics in recent years. Despite enormous adulation they enjoyed, neither MGR nor NTR took the people for granted when entering politics. Unlike MGR, NTR did not have a political pedigree, but spared no effort in understanding and articulating public issues that impacted the masses.

Chiranjeevi enjoyed many advantages but failed to convince the voting public that he was an alternative to the existing set-up. His campaign began with an assumption that he was a chief-minister-in-waiting and he had to just walk through elections to occupy the chair.

While NTR used his celluloid image to reach out to the public, he never relied on his glamour alone. The political content of NTR’s campaign was more focused and serious, while Chiranjeevi’s was more style than substance. I think Pawan Kalyan also suffers from the same failings (as his brother). Actors cannot succeed in politics unless they carry a serious political message.

Did the kind of films NTR played, particularly mythologies, give him any advantage? Why did he have such high credibility with masses? What in your estimate justifies calling him a messiah of any kind, even if of a maverick kind?

An interesting aspect of NTR's mythologies were that they were pan-Indian stories, and not directly related to Telugu nationalism and pride that NTR propounded politically. During NTR’s time, screen adaptations of mythologies became known for a distinctive Telugu, which was formal and ceremonial. As several researchers have pointed out, NTR's mastery over language, considered a quintessential Telugu experience, did help in his emergence as a Telugu cultural symbol.

My hypothesis is that NTR carried over the linguistic identity of these films into his political campaign, but not his screen 'divinity'. His political credibility was not a by-product of his playing godly characters. He worked towards it consciously both in his film career and later on in politics.

As for the tag of messiah, NTR burst on to the political scene in 1982 as a ray of hope and captivated the imagination of the Telugus like no other leader. His campaigns were the greatest spectacles of democracy in action. Shortcomings notwithstanding, NTR emerged as a larger-than-life personality and brought a sea-change in the socio-political landscape of AP.

The maverick apart, NTR was a man of strange contradictions. He believed in the power of people, but his democratic credentials were suspect because he had no qualms in turning his party into a one-man show. He was secular to the core but exhibited a peculiar religious streak. He entered politics on the plank of regionalism but remained a committed nationalist throughout.

How did people relate to his dramatics and eccentricities?

His dramatics entertained the masses but some sections of people intensely disliked the theatrics he brought into politics. He carried this urge to be the centre of attraction from reel to public life. However, common folks were not particularly put off by this, because of his ability to convey seriousness of intent. Despite the nickname 'Drama Rao', NTR was a very serious man in private and rarely cracked a joke. But a common person felt warmth in his presence.