Hello, radio amateurs- homemade products !
Thyristors and triacs are not that often used elements in amateur radio, at least when it comes to low-voltage circuits. However, they are indispensable for switching powerful electrical appliances in a 220V network, as well as for creating various power regulators. Their use in amateur radio circuits makes it necessary to check these elements for operability, especially for used devices. elements. But recently, semiconductor devices that have just been bought in stores have to be checked, because in order to generate additional profit, many stores are trying to sell “leftist”, relabeled or completely non-working parts. Unfortunately, it will not be possible to fully check the thyristor or triac with a multimeter – the maximum is possible to ring the short circuit terminals and determine only a completely burnt out element. Therefore, it makes sense to assemble do it yourself a fairly simple device that will allow you to effectively test these parts will be relevant for those who often use thyristors or triacs. The tester schematic is shown below:
At the beginning of the circuit, you can see a 12V transformer, from which the circuit will take power. It is not necessary to use a large and powerful transformer here, a small one with a maximum current of 200 mA will be enough, the output voltage can vary from 9 to 20V. Please note that the circuit must be powered from a transformer, since it outputs an alternating voltage at the output – this aspect is important for the operation of the device, therefore it is impossible to power the circuit from various network adapters and switching power supplies. Two LEDs act as indicators in the device – D3 and D4, they are switched on with different polarities, so if the tested element misses both half-periods, both LEDs will be on, if only a positive half-period – one LED, if negative – another LED. If not a single LED lights up during the test, then the thyristor or triac under test does not open at all. Resistors R3, R4 limit the current through the LEDs, that is, set their brightness. Resistor R5 is a load resistor, creating a current through the thyristor of about 0.1A.
Please note that its power must be at least 1W, otherwise the resistor will overheat. You can collect 1W from several low-power resistors, so that their total resistance turns out to be about 100 ohms. Also, instead of this resistor, you can take a low-power 12V light bulb, its glow will be an additional indicator of the thyristor/triac performance, together with the LEDs. Buttons SW2, SW3 allow you to control the thyristor/triac under test, when you press SW2, a negative half-cycle will come to the control electrode, with SW3 – a positive one. You can take almost any diodes, except for those indicated, 1N4148, 1N4007 are suitable. In the lower right part of the circuit, the connection of the tested thyristor or triac is shown, it is important to correctly connect the tested sample, if you mix up the terminals, the circuit, of course, will show that the element is inoperative and there is a risk of rejection. However, if the tester has shown the normal operation of the element, then it can be almost 100% asserted that it is serviceable. The photo below shows all the elements required to assemble the device. 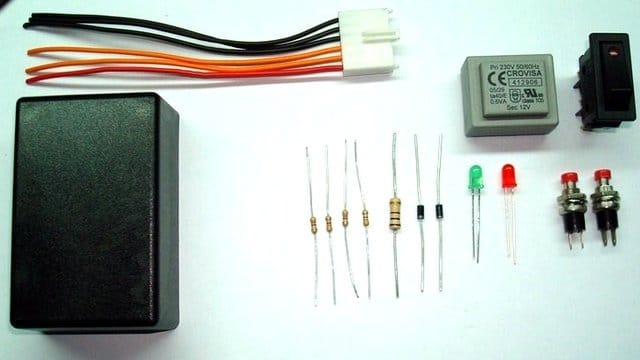 In order for the tester to be convenient to use, it is necessary to place the entire circuit in the case, while the transformer will be located inside the case, as can be seen in the picture below. The circuit is quite simple, so you can even unsolder everything with a hinged installation – fix the resistors and diodes on the button terminals, and install the buttons themselves with the nuts on the front panel of the case. Fix the LEDs to the body using special holders, solder resistors to their terminals. In the case, you also need to find a place to install a 220V connector to connect the transformer to the network, while a switch can be installed in the break of the primary winding. But you can do without it, in this case the device will be ready for use immediately after plugging into the outlet. 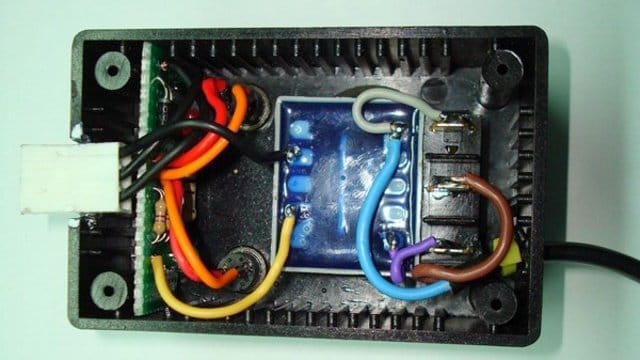 Another important element on the case is a contact pad for connecting a tested thyristor/triac. As a rule, in TO220 housings, these elements always have the same marking, regardless of the model, therefore there is a “standard” contact pad on the case, for example, made of a pin connector. However, it will not be superfluous to bring out three wiring with crocodiles for the possibility of connecting elements in various other cases. Thus, the result is a functional and reliable device, made in a nice case. Happy assembly!