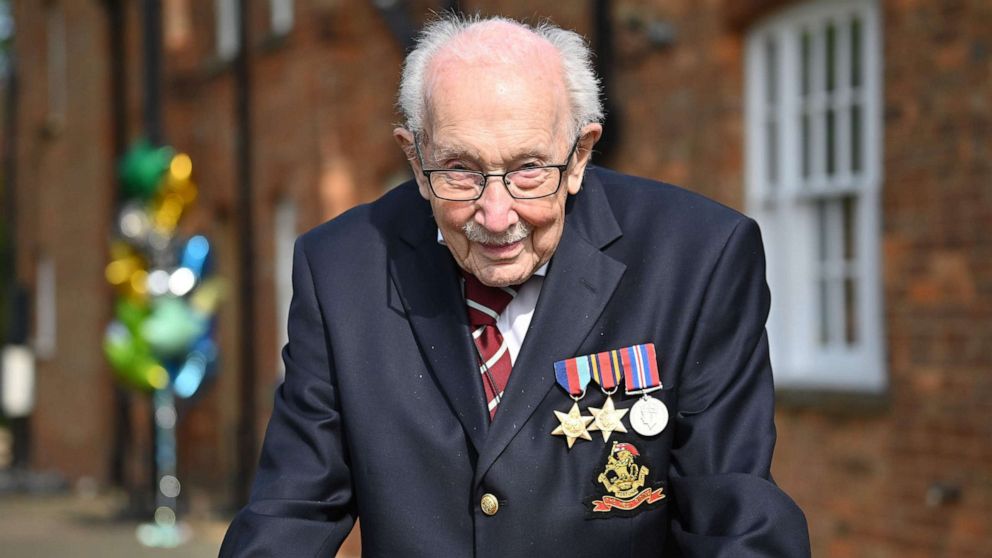 LONDON — Capt. Sir Thomas Moore, the World War II veteran who raised tens of millions of dollars for front-line health workers during the coronavirus pandemic, has died at the age of 100.

The veteran, affectionately known as “Captain Tom,” tested positive for COVID-19 last week and was hospitalized on Sunday. Moore had received treatment for pneumonia over the past few weeks, his family said. His death was confirmed on social media accounts run by his family.

Moore rose to international prominence in April 2020 when he began fundraising for the health workers who had treated him for cancer by walking around his garden in Buckinghamshire, England, in the weeks leading up to his 100th birthday.

Moore initially set out to raise just £1,000 ($1,370). In the end he is estimated to have raised £33 million ($45 million) for essential workers. His efforts captured the hearts of millions in the U.K. and abroad in lockdown.

In July, he was knighted by Queen Elizabeth II. Reacting to that news, Moore displayed his trademark humility and sense of humor, saying: “I’m still Tom Moore. I mean, it’s nice. It’s nice, I think Sir Thomas sounds very nice, but inside I haven’t changed. Nothing’s changed inside.”

During New Year’s Eve celebrations in London, Moore was honored with his own personalized fireworks display, complete with his trademark walking aid and military badges. He was hailed by London Mayor Sadiq Khan as a “true national hero.”

Moore’s fundraising exploits made headlines across the globe and inspired a Russian veteran, 97-year-old Ziniaida Korneva, to take up similar efforts.

Queen Elizabeth is sending a private message of condolence to Moore’s family.

“Her Majesty very much enjoyed meeting Captain Sir Tom and his family at Windsor last year,” a Buckingham Palace spokesperson told ABC News. “Her thoughts, and those of the Royal Family, are with them, recognizing the inspiration he provided for the whole nation and others across the world.”

U.K. Prime Minister Boris Johnson said Moore “became not just a national inspiration but a beacon of hope for the world.”

“Captain Sir Tom Moore was a hero in the truest sense of the world,” Johnson said in a statement. “In the dark days of the Second World War he fought for freedom and in the face of this country’s deepest post war crisis he united us all, he cheered us all up, and he embodied the triumph of the human spirit. Our thoughts are with his daughter Hannah and all his family.”