Good day to all! < br> This time I present my homemade product , code-named Tsvetozerkalo.
We've been waiting a long time for their “finest hour”, electronic clock – a calendar “Waterfall”, with an imitation of flowing water and the chirping of birds that wandered from room to room and no matter how there was no place for them. 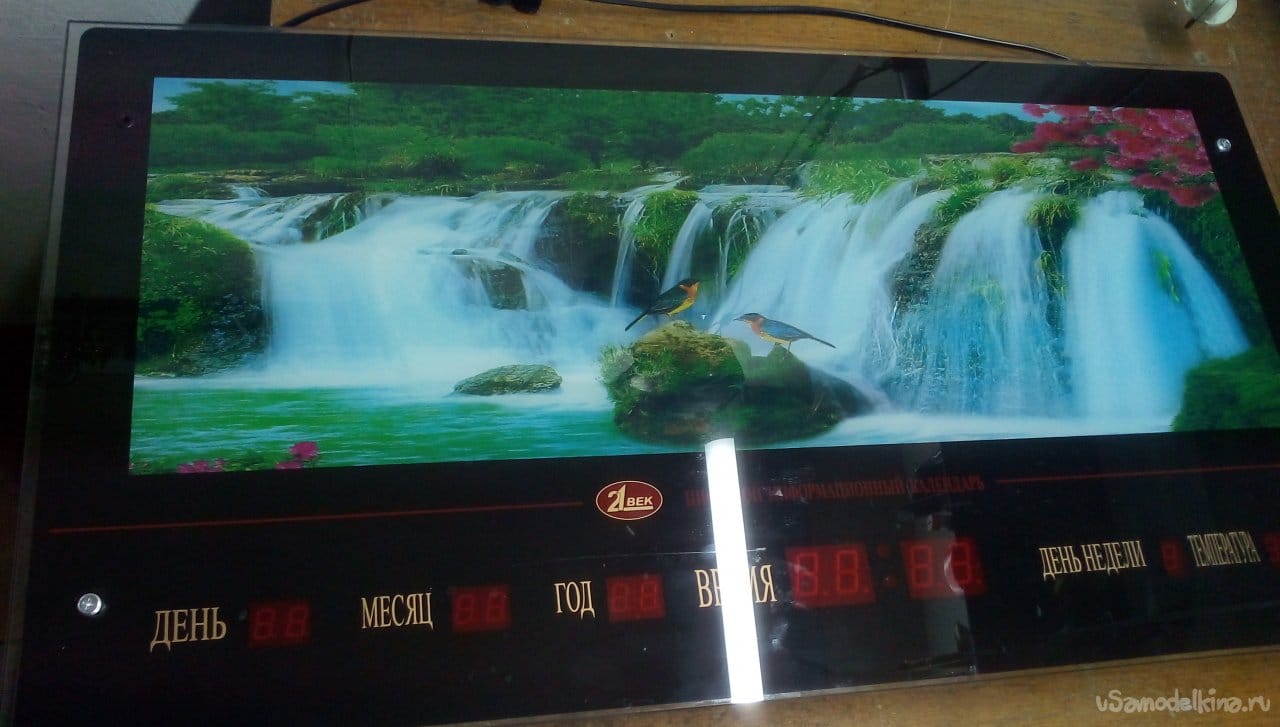 The moral obsolescence of a thing that was popular somewhere in the year 2009 (on the inner wall of the case, 09 is written in marker, probably the year of release, in the photo where the tester lies), I may be mistaken. As always, it’s a pity to throw it out, because the workers, in any case, the display and the thermometer are working, and the waterfall creaked. And, at least somehow to use this “exhibit”, the youngest daughter decided to make a mirror in the children's room, yes with illumination, yes with a clock, calendar and thermometer (of course, the last three positions are still difficult for the child to understand). She asked that the numbers would glow and the bulbs would blink, later she would learn to determine the time and understand the temperature.
The goals have been set, they need to be realized.
For work we need ……
Materials and tools:
Materials:
1. 2835SMD Flexible Glow Tape for Lighting
2. Mirror.
3. Double-sided tape (I used red).
4. Electronic clock – the “Waterfall” calendar, or their analog.
Tools:
1. Ruler.
2. Knife.
3. Screwdrivers + and -.
4. Soldering iron with accessories, for soldering.
5. Thermo gun with hot melt glue.
6. Tester.
STEP 1 Opening – overview.
Let's start by removing the decorative glass. To do this, we unscrew the decorative, plastic caps from special self-tapping screws, with a thread in the head part, which press the glass against the wooden case.
Here's a picture. Along the way, the manufacturers did not bother much, over the manufacture of the “consumer goods” case, but all this “art” cost a lot of money. 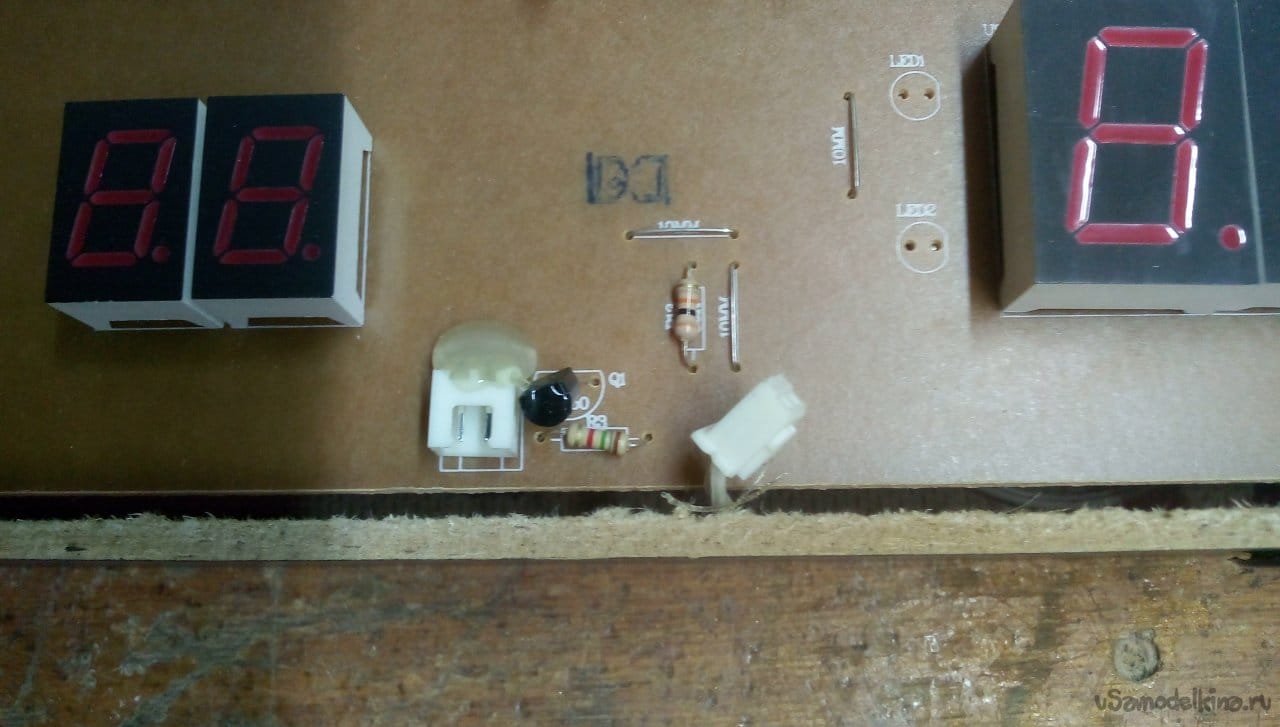 I remembered that I had already opened this “patient”, and I did it in order to turn off the speaker. The fact is that when the clock was turned on and the backlight was used as a night light, the sound of pouring water and the “chirping” of birds turned on, which even greatly bothered, and the feeling of being in the forest near the waterfall did not come. Moreover, it “cuckoo” every hour, day and night. There were no instructions, of course, to disable all this using the settings buttons, and there was a problem with googling before. Just unplugged the speaker terminal. 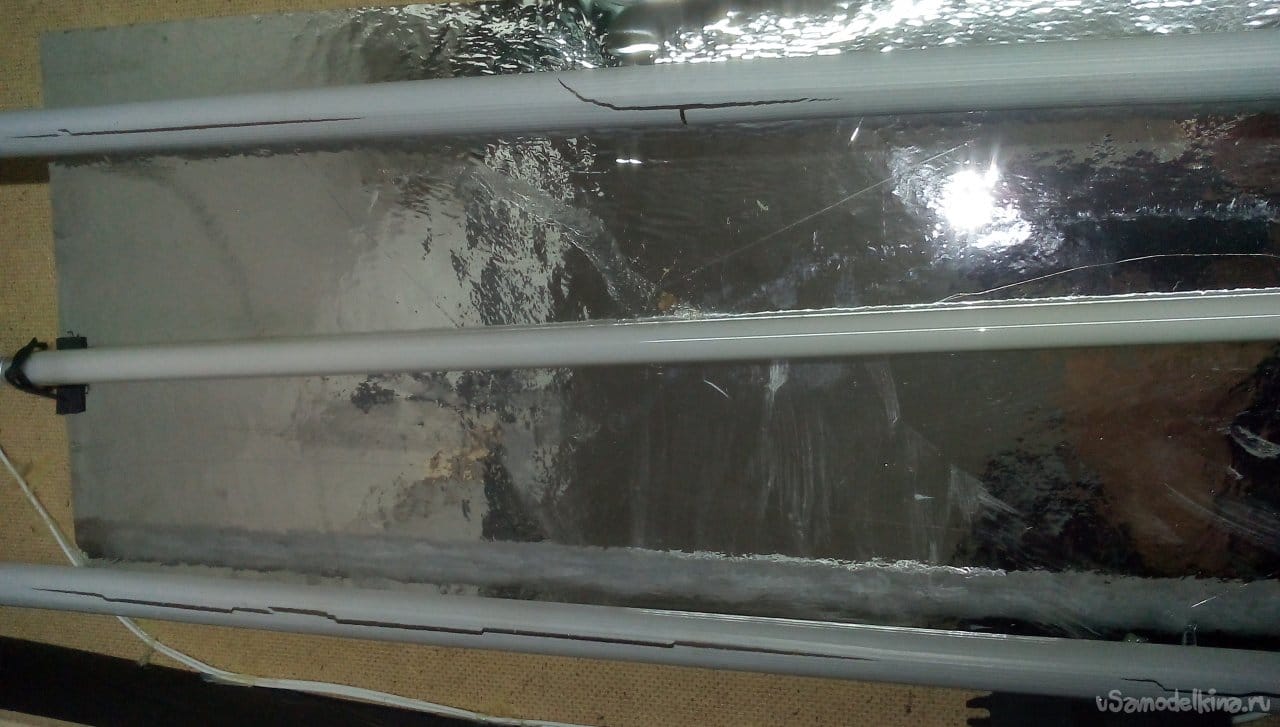 Then I cut off the film – imitation of flowing water and cracked shafts were exposed (that's why the “water” crunched). The engine hums, the water crunches – there was beauty. 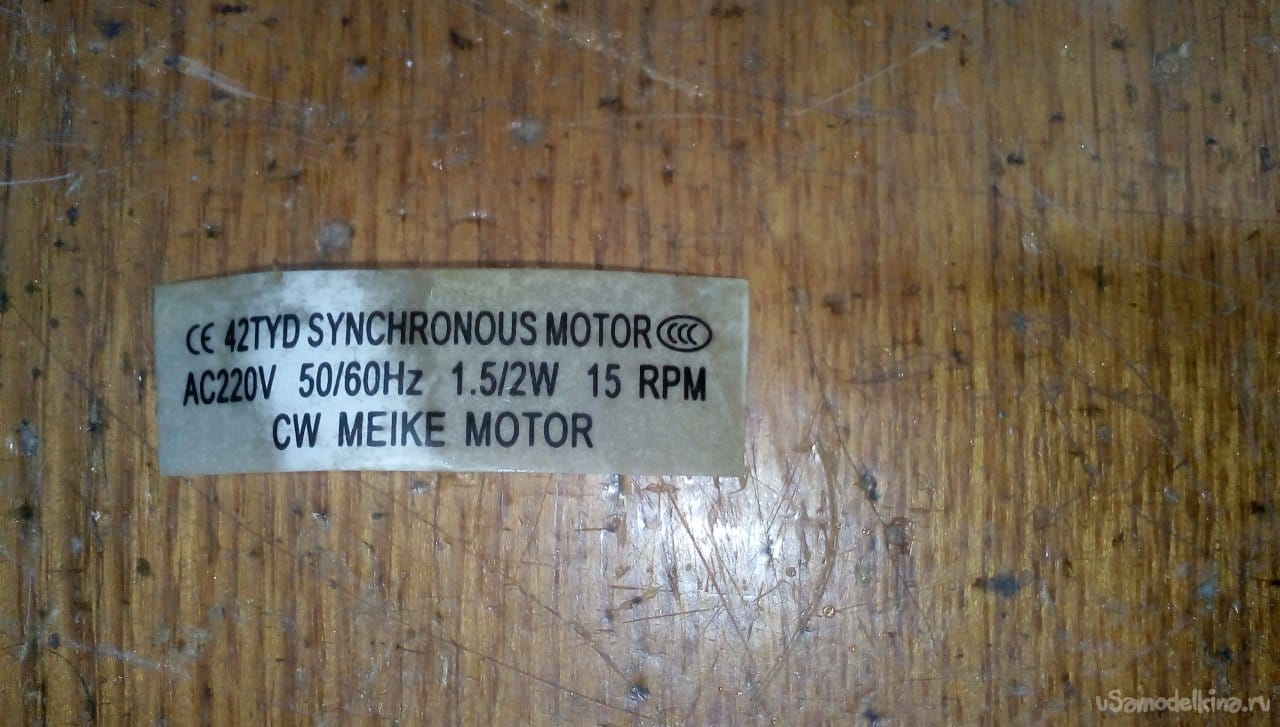 An engine with a 220 V gearbox, by the way, powerfully turns the shaft, after dismantling, I use it in any homemade product (a disco ball, for example). The sticker was lying inside the case.
The lamp is powered from the control unit, which in turn is connected to a common twist of 220 V. < br>Hike analogue of fluorescent fluorescent lamp. Also in the future he will go to the “good cause”.
Finally I figured out the buttons. The fact is that the protective film of the buttons was glued crookedly with an upward shift, because of this there was a confusion with the buttons for controlling the device (it felt like there were 3 of them, BCD), i.e. where the D button is located, there was just a black film, and it is this button that is responsible for mute. I cut the edge of the film at the mark (D) and glued it in place. Everything is in order, now everything fell into place, and the control of the scoreboard numbers became clear – logical.
The board in this design rests and is fixed on wooden” hemp “, which have already partially peeled off, but were returned to their place and fixed, according to the manufacturer's technology, using hot glue (sperm glue). 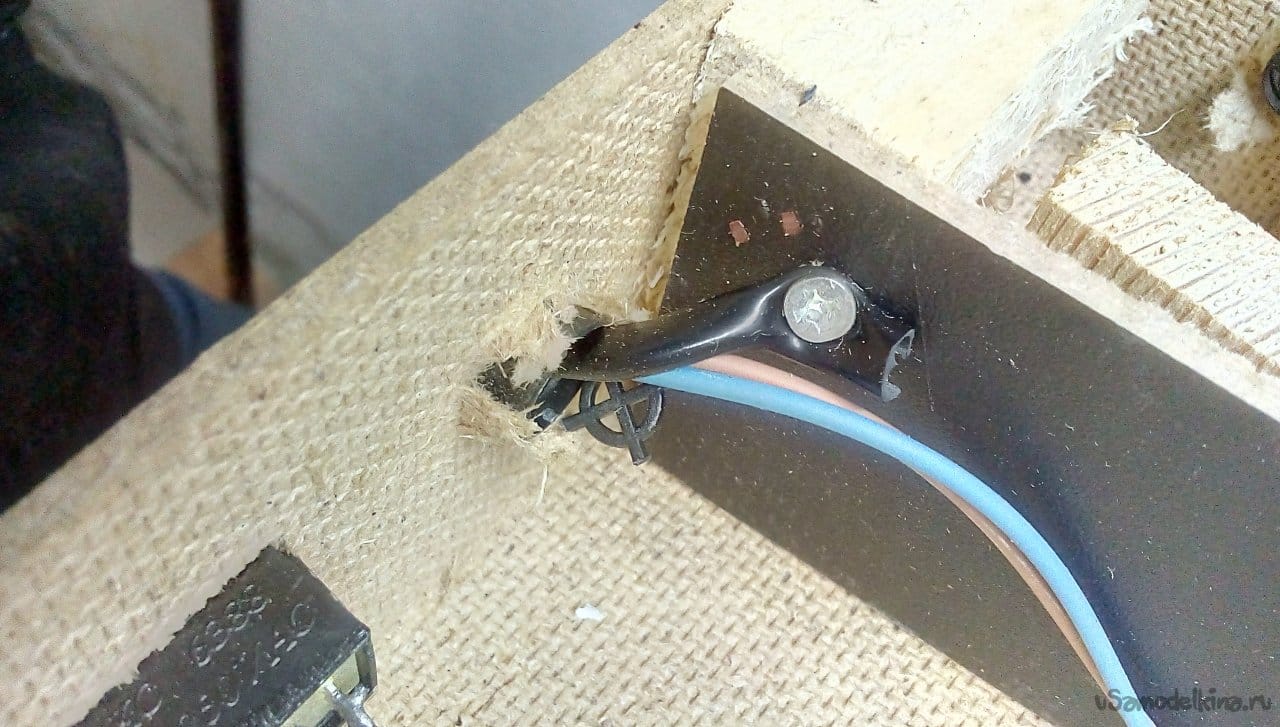 I discovered a new way of attaching the power cable (for the braid), by God for the first time I see such a “miracle”. I have never seen such a “life hack” in any devices. This method is also useful to me, sometimes I need to fix the end of the cable with wiring and I have to come up with something, and then I need a screw … .. 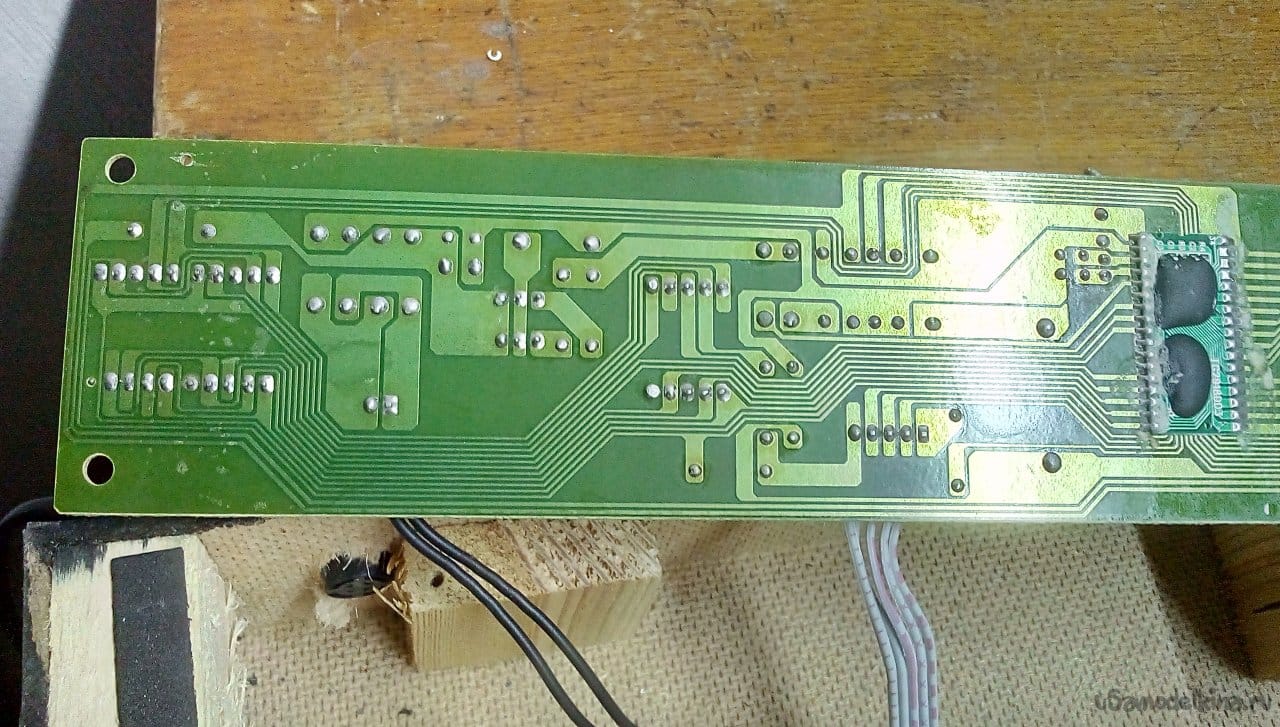 The board can be seen Chinese, embedded for it product. In general, to be honest, the manufacturer of this particular watch is unknown, nowhere, not any information. But after googling, I found out that similar ones are made by a 21st century company in Yekaterinburg.
Duck I'm talking about the board, please tell me where is the temperature sensor, or the thermocouple? I could not visually determine. The thing is, at work there is a similar “Manhattan” watch, without a waterfall, and I noticed that the thermometer reads too high. If you lean your hand against the glass, then in the area where the mains step-down transformer is attached, you feel heat – the output, the inner space of the case heats up, and hence the incorrect reading of the thermometer. In the future, I want to somehow protect the temperature sensor from excessive heat (if you tell me WHERE IT IS …).
STEP 3 Assembly of facade glass.
I ordered a mirror measuring 700 x 290 mm from the masters., with a processed edge and two holes of 8 mm., for fixing the glass part to the wooden case.
Next, cut the double-sided tape into pieces and glue it on the back of the mirror. For some reason, it is advised to use just “red”, double-sided tape, such as stronger.
Well, “without the right to make a mistake,” we glue the mirror to the main decorative glass, after removing the protective films. 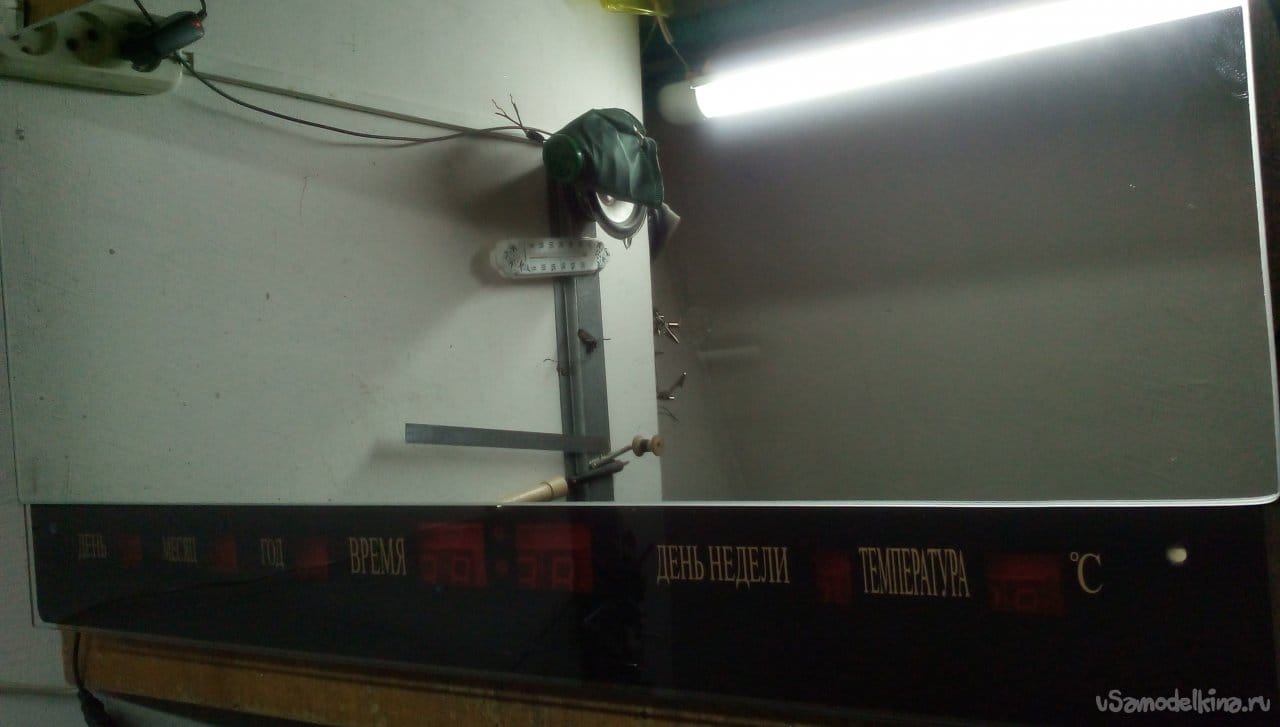 STEP 4 Cut off the unnecessary. 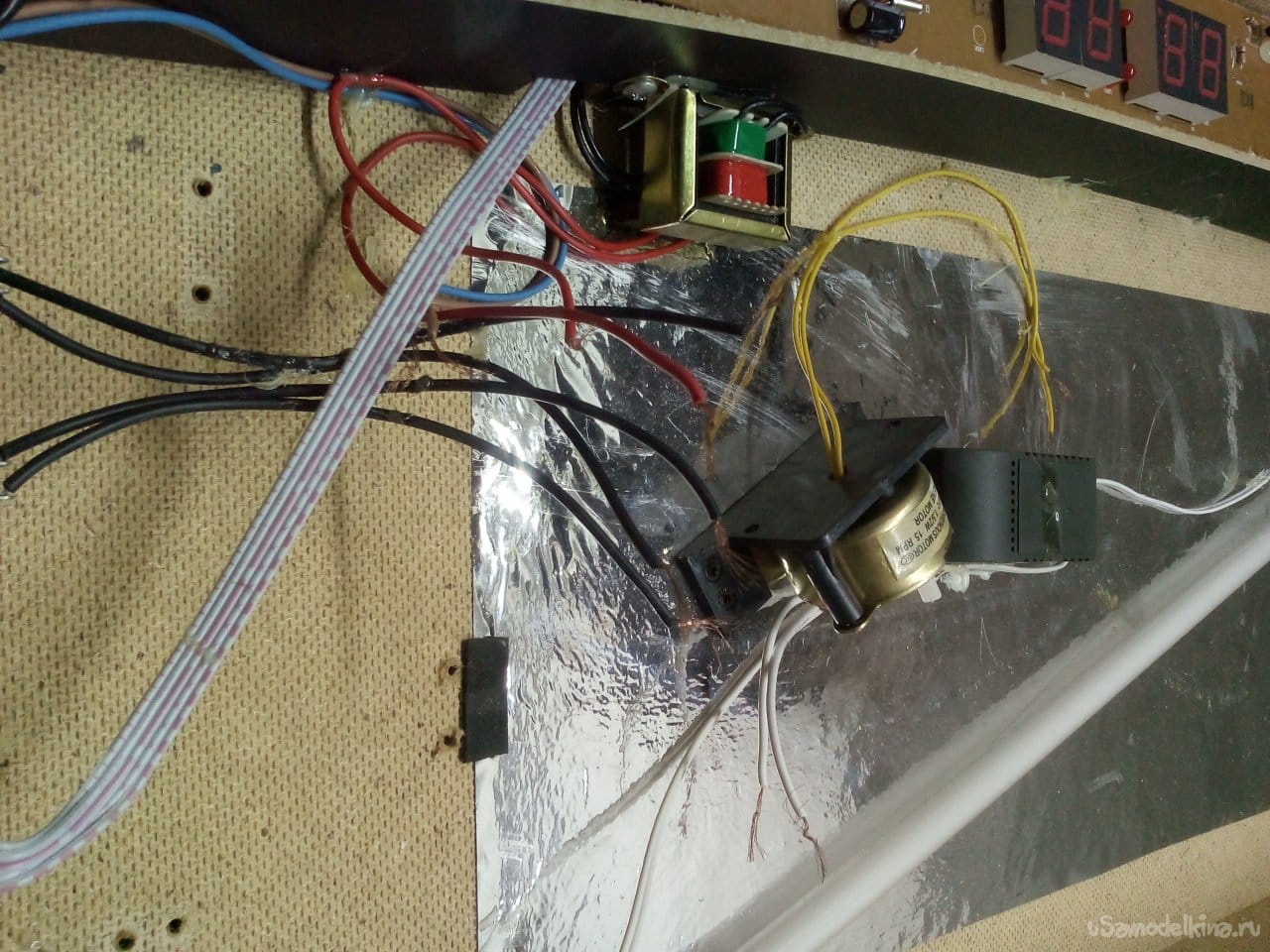 We dismantle the mechanical part of the watch. As well as a backlight kit. 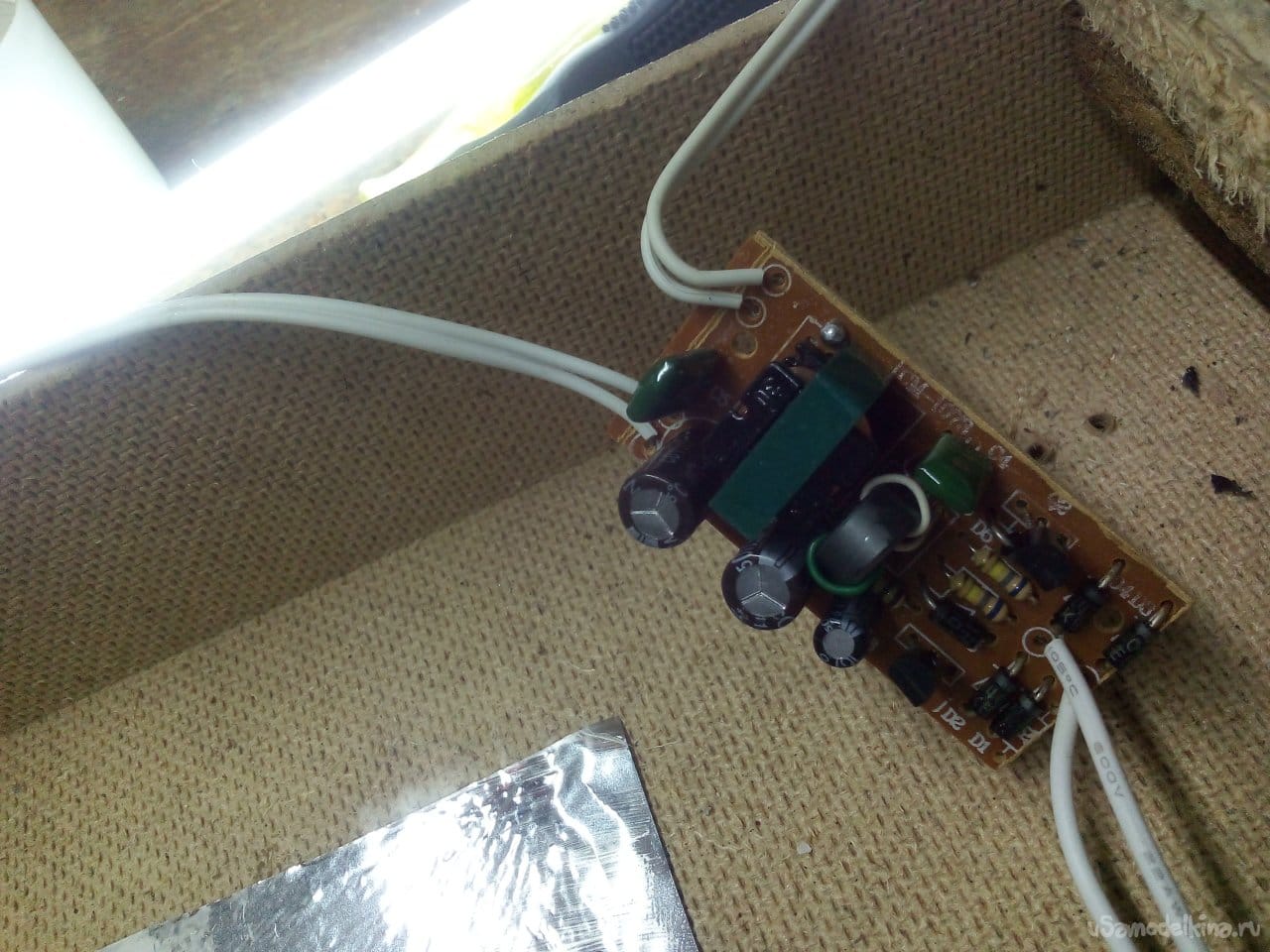 My level of knowledge did not allow me to determine the name and principle of operation of this backlight. I repeat, but in my opinion, this is an analogue of a fluorescent lamp. The board is a choke. Please correct me if I'm wrong.
STEP 5 Replacing the power cord and installing the LED strip.
I decided to change the power cord from black to white, in terms of the fact that the white cord is background of light wallpaper, will look decent and invisible. Replacing the cord was not a big problem, “according to the old scheme” – for the braid. 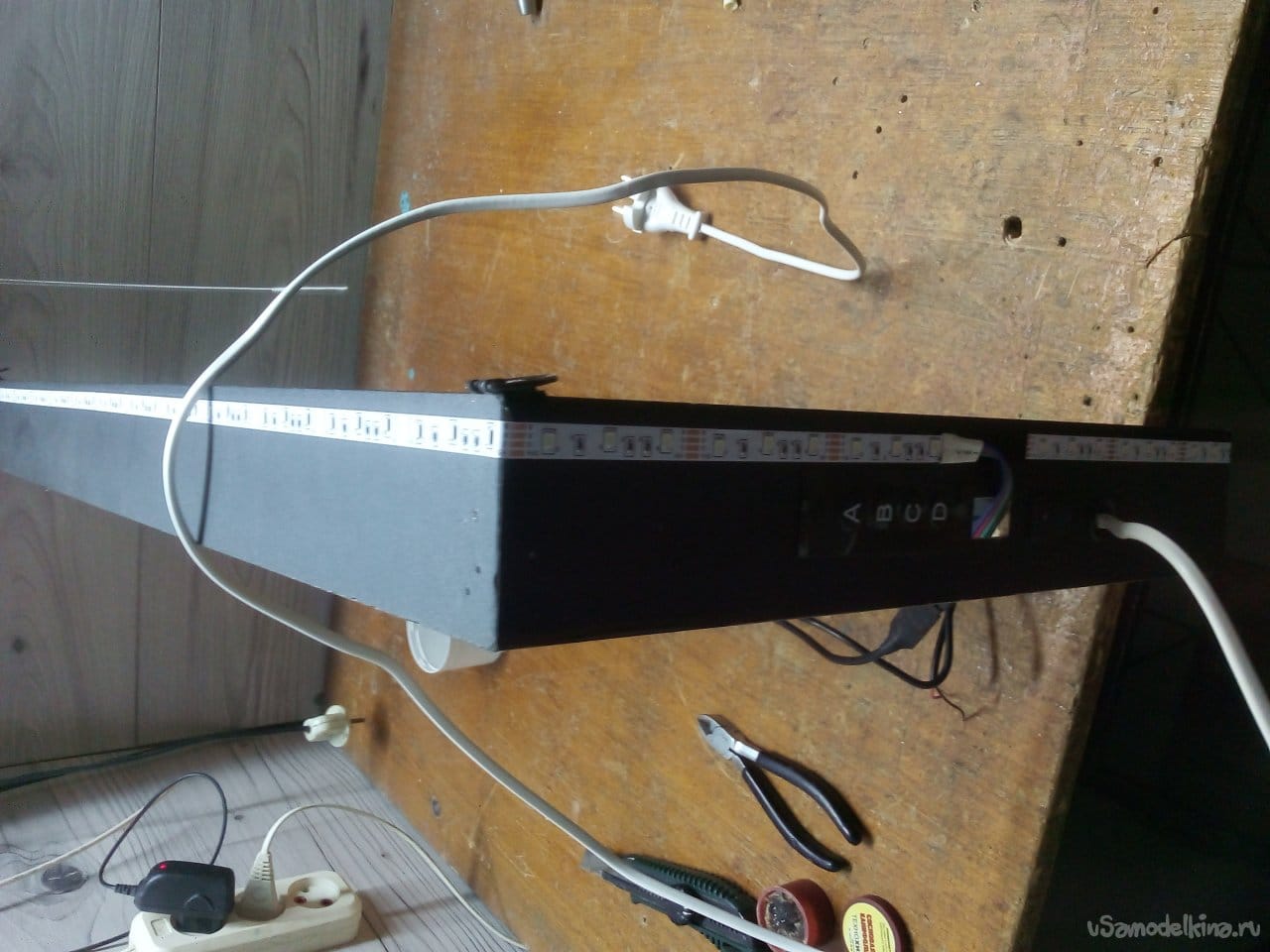 Then I glued the LED strip along the edge of the case (the double-sided tape on the tape is pretty strong), tucked the ends of the wire with the block inside, through the technological hole, from the backlight switch, dismantled for unnecessarily. And, here then I “stalled” in time. The IR receiver on the controller turned out to be inside the case, and I didn't even think about it at all, how the backlight modes would change, and even turn it on and off remotely. 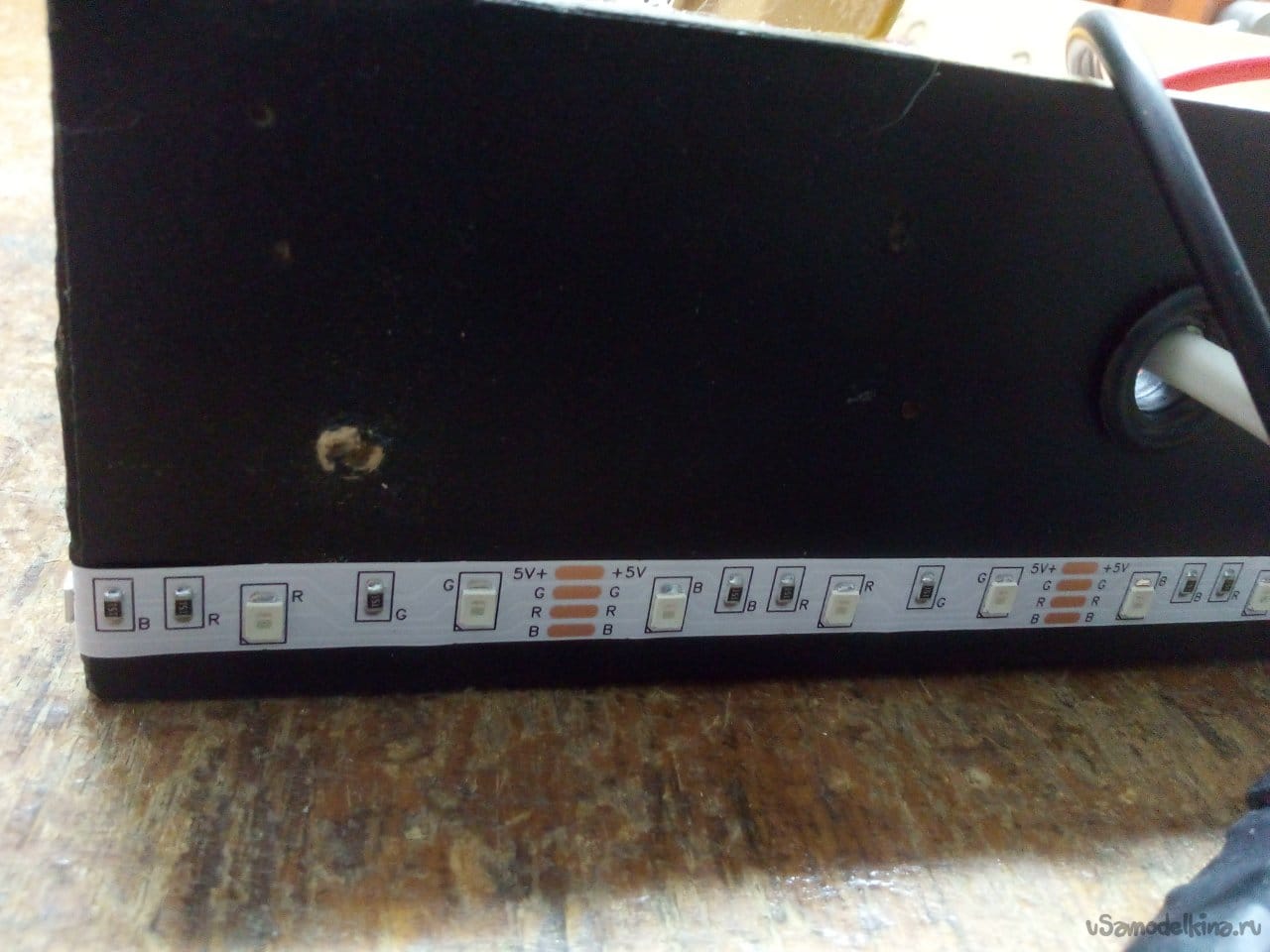 I had to drill a hole for the wire supplying the illumination and place the parts outside and on the side of the case, and I covered the square hole with black tape on both sides, until I find a suitable plug.
STEP 6 Connect. 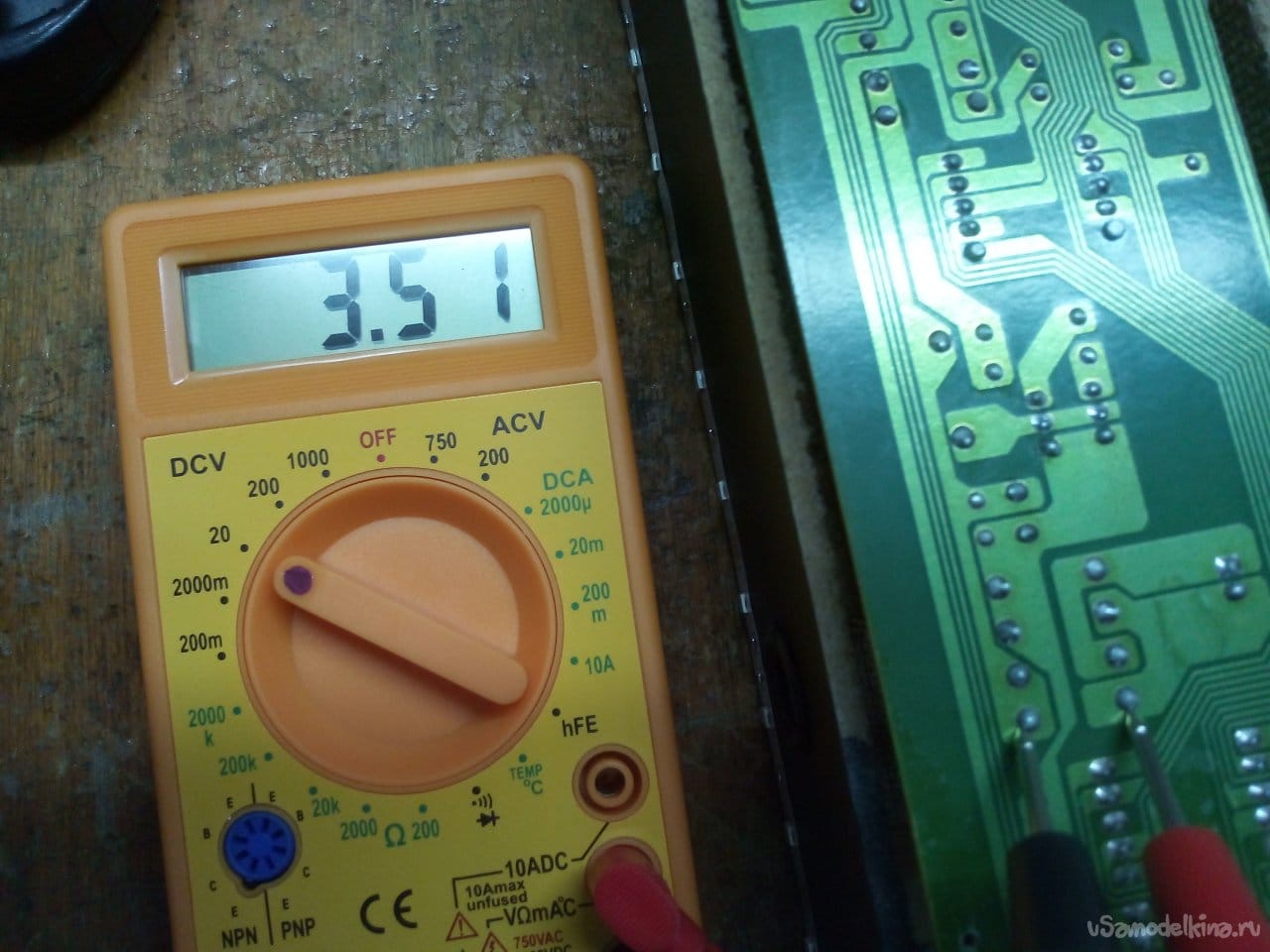 Using the “Scientific poke” method, I measured the voltage, after the diode bridge, as a result, I got 3.5V DC, I tried to power the backlight from these points, and here's a bummer, the backlight burned, but did not switch to flicker and color change modes. Maybe the tension was not enough. “Smart heads” describe the situation in the comments.
Another decision was made. 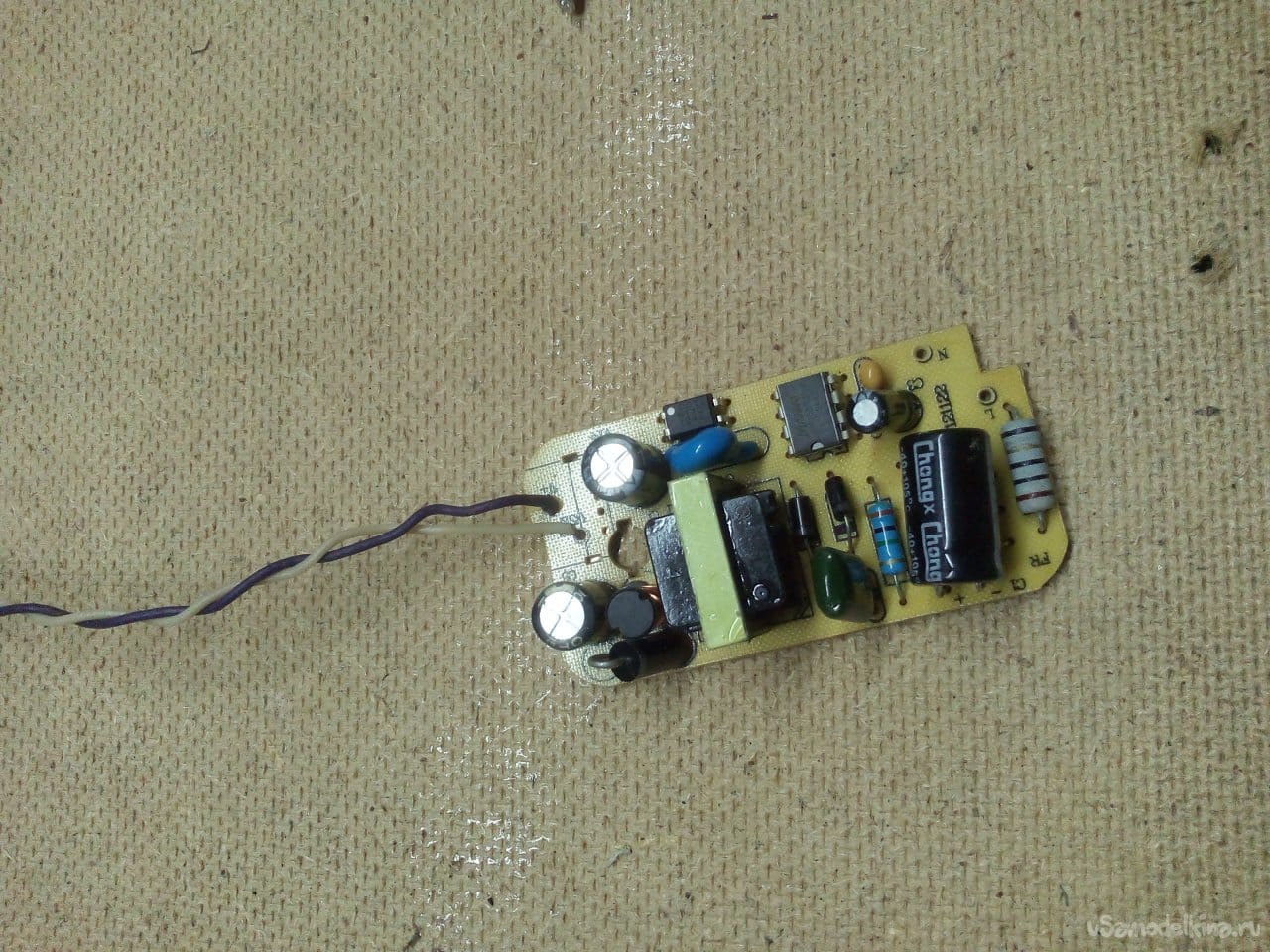 There was a board from a 5 volt charger, for the phone, and I was powered to it, through the remaining of the two, a switch, well, or a switch. (By the way, what's the correct name?)
Trial run – and it all worked !!! 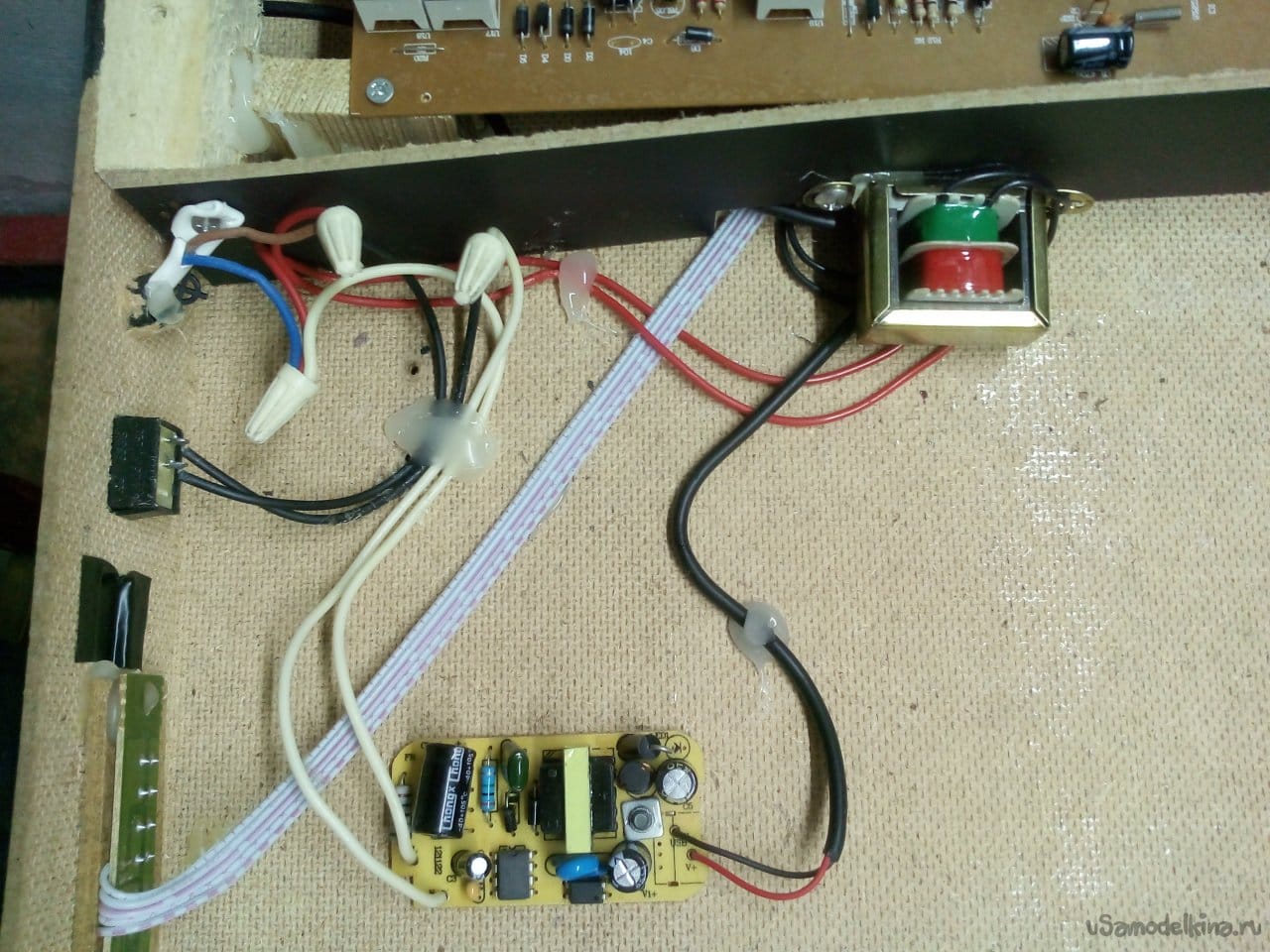 Using the same (sperm glue), fix the wiring and screw the circuit boards to the case. 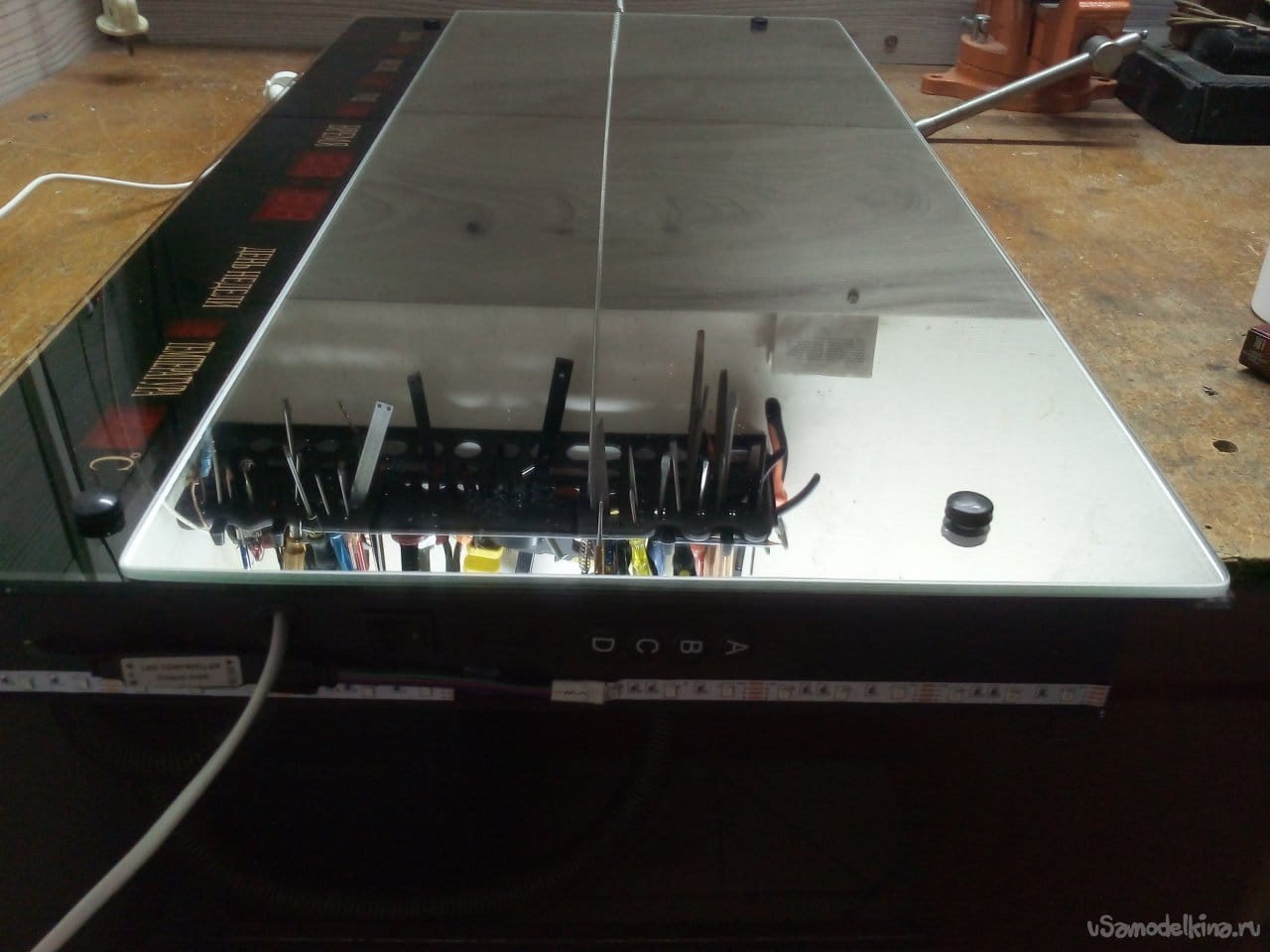 We install and fix the front mirror – glass part of the “Tsvetomirkal”.
STEP 8 We admire the work done.
Fix the structure to its “regular” place and enjoy the child's positive emotions. 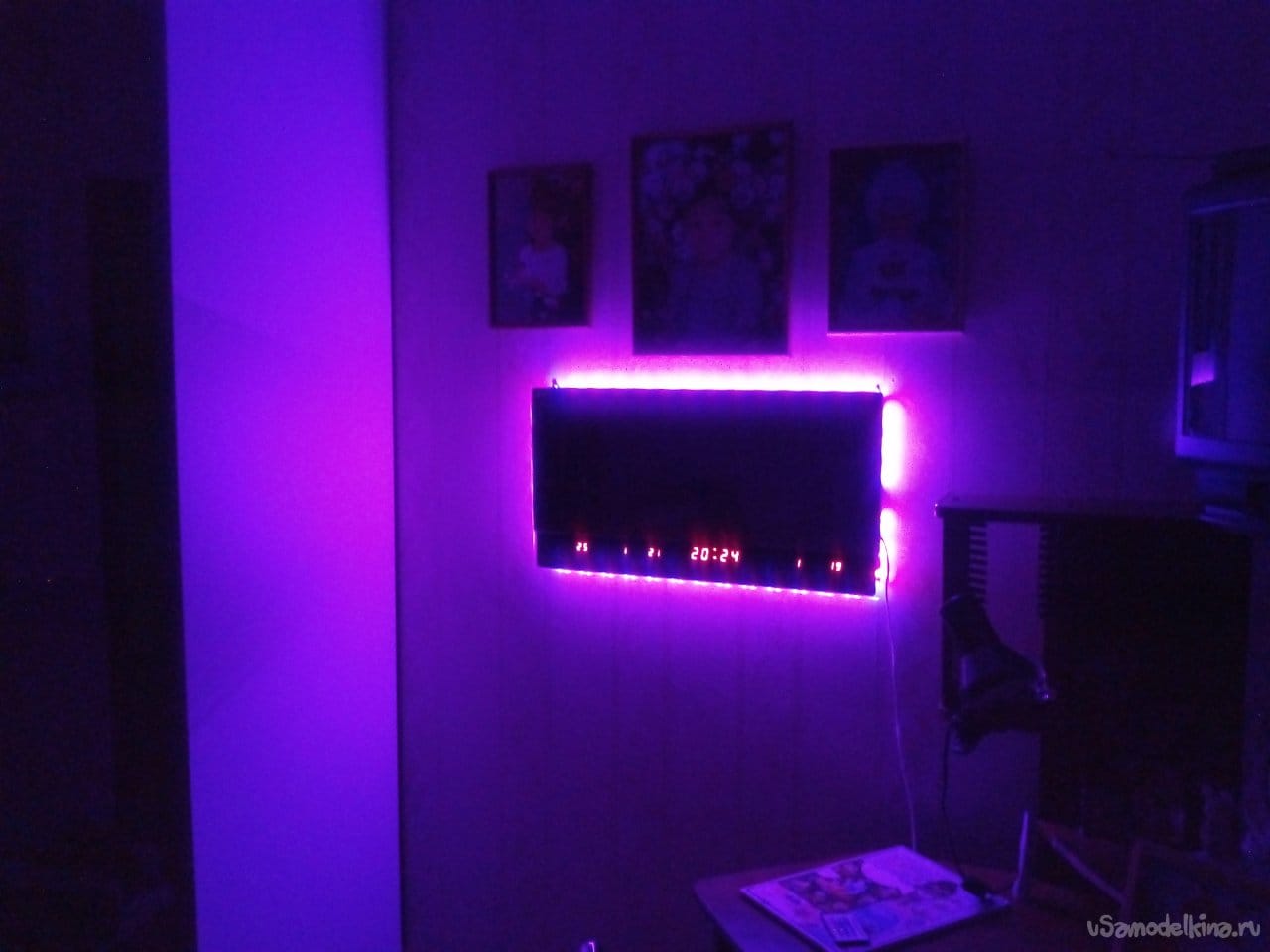 How do you like the model
Liked ? Not bad. Well, okay, I don’t know, will pull :). Total voted: 0 Vote Results
Source: