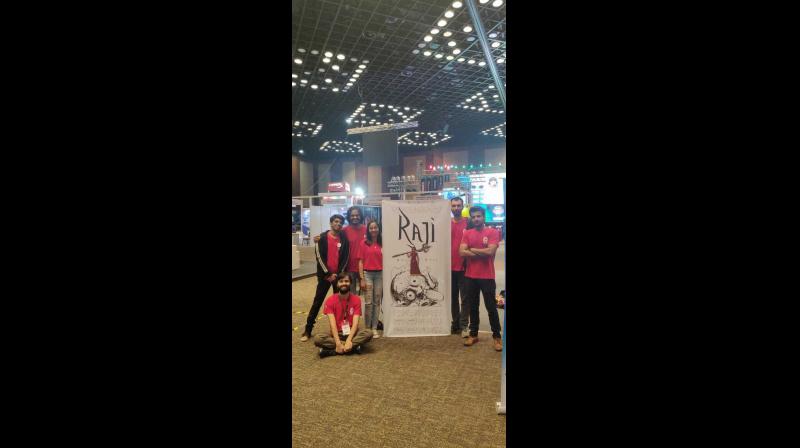 While the whole world is making the most of technology to share information, Nodding Heads Games (NHG), a gaming company based in Pune, Maharashtra, found a smart way to get the digitally proficient generation immerse into the intricacies of Indian mythology.

NHG, a thirteen-member company with its members based across India, Greece, Australia, Brazil and the UK, developed Raji: An Ancient Epic, an action-adventure game set in ancient India. While it was developed in 2016, the year the company officially started, Raji was successfully launched on Nintendo Switch, PC, XBOX and PS4 last year. It has gained many accolades since, including a nomination for the Best Debut Indie Title at The Game Awards 2020.
Avichal Singh, Co-founder and Game Designer, elaborates to us the premise of the game. “A young girl named Raji has been chosen by the gods to stand against the demonic invasion of the human realm. Her destiny? In part, to rescue her younger brother and face the demon lord Mahabalasura,” he says. After opening up about the plot of the game, Avichal tells us that the company’s mandate was to make a game that references the myths, stories and cultural diversities of the civilisation, of which India is abundant. “We thought this would make for a great setting and so we laid the foundations for Raji.”

However, the motivation to create Raji rested elsewhere. “As gamers ourselves, we’ve rarely witnessed a game set in India, which is what transitioned us all to explore,” Avichal adds. “Collectively, we thought, it’s now or never. Additionally, we wanted to make a bold statement by putting India on the game developing map, which also drove us to best ourselves, both individually and as a team while creating the game.”

The idea for Raji: An Ancient Epic came to Avichal on New Year’s Eve 2013 at Jaisalmer in Rajasthan. Completely awed by the beauty of “Patwon ki Haveli”, a palace built in the nineteenth century, Avichal wondered if this could be in a video game.

So while the design of Raji: An Ancient Epic is inspired by Indian mythological epics such as Mahabharata and Ramayana, it has taken many a leaf from the medieval architecture of Rajasthan. Additionally, the background and gameplay of Raji are inspired from not only hand-painted textures, a compelling game art style that adds a whimsical quality to the animation, but also the Pahari art style, bringing a refreshing new style and a stunning and unique visual quality rarely seen in the gaming industry.

Going back to how the company came to be, in 2013, Avichal took up a lecturer’s position at a design college, where he connected with two other lecturers — Shruti Ghosh and Ian Maude (who later became cofounders and art directors at Nodding Heads Games). After a two-year stint at the college, Avichal left his job to become a game designer at Zynga, game developers. Around the same time, Shruti left the college to join Electronic Art (EA), a video game company, as an art manager. Ian, however, continued his art lecturer stint at the college.
Avichal says that while the trio hoped to work together one day, it was much later in 2016 when they began working on a high level pitch for the game. “Shruti had made some early sketches from an isometric point of view, which was an instant hit among close friends,” remembers Avichal. “This reassured us that we were on the right path and we knew we had something special on our hands. So we quit our respective jobs in the latter quarter of 2016 and started off together on this journey.”

Hardly a child’s play
However, despite the trio coming together, not everything about rolling out Raji was smooth sailing. For starters, the team faced their biggest challenge in getting the finances in place.

“Being a studio developing PC and console games in a predominantly mobile market poses difficulties, to say the least,” adds Avichal and goes on to elaborate. “Most investors we spoke to did not understand the concept of making a PC game, and were mostly looking for quick returns. So they wanted us to finish the game in six months or release it in episodes. Most big publishers who did show interest also backed out even though we had a solid demo to back our pitch because India is largely considered an outsourcing hub and we were an untested team.”

Besides finding investors, the team also understood that getting development kits in India is a whole new ball game, points out Avichal. “Our Switch development kit was stuck in customs for almost two months, which we managed to get only after a lot of back and forth and plenty of emails,” he adds, the frustration of it all still escaping through his recollection.

But Avichal and his team are happy to let bygones be bygones, and are focused on the next steps. “For now, our team is recovering from a hectic launch and stressful development schedule and are currently catching up with the rest of the world while taking it slow,” says Avichal.

“While we are yet to put a finger on what is next for Nodding Heads Games or Raji, we plan to announce our specific directions across the board via our social media channels,” he says.

As gamers ourselves, we’ve rarely witnessed a game set in India, which is what transitioned us all to explore. Collectively, we thought, it’s now or never. Additionally, we wanted to make bold statement by putting India on the game developing map, which also drove us to best ourselves, both individually and as a team while creating the game
— Avichal Singh, Co-founder and Game Designer

10 of the world’s most amazing rock formations