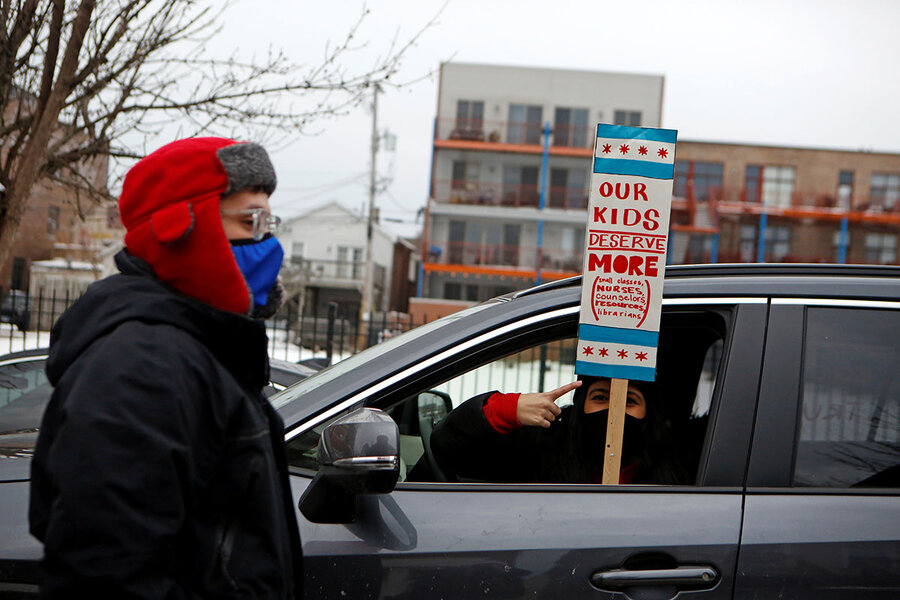 This parent fatigue – if it grows – represents a major threat for teachers and their unions. Growing evidence shows that online instruction is falling short while multiple studies indicate that schools are not major transmitters of COVID-19. Combined with rising political pressure to reopen from the Biden administration and state and local officials, this threatens to turn public opinion against the unions and weaken their leverage. But there’s a complicating factor: The health risks of reopening schools vary by community and are higher in low-income and African American and Latino neighborhoods.

“There are no good options here,” says Thomas Dee, a professor at the Stanford Graduate School of Education in California. On the one hand, “we have leading evidence that parents and children are suffering under school closures.” Between April and October 2020, the share of emergency-department visits for mental health reasons rose 24% for children ages 5 to 11 and 31% for those 12 to 17, according to the Centers for Disease Control and Prevention (CDC). On the other hand, some political leaders are asking teachers to bear the risks caused by the country’s failure to counter and contain the pandemic.

Schools have reopened in patchwork fashion around the country. Four states – Arkansas, Florida, Iowa, and Texas – have ordered public schools to open, according to data compiled by Education Week. Six others have ordered partial closings in areas where infections are high. The rest of the states have left it up to local school districts.

It’s telling that union-administrator tensions have flared in public school districts with high concentrations of people of color:

In Fort Lauderdale, Florida, and surrounding Broward County (where roughly three-quarters of the students are Black or Hispanic), the teachers union sued the school system when administrators began forcing teachers diagnosed with illness to return to the classroom. A mediator agreed with the administration that 600 seriously ill teachers deserved special accommodation, not the 1,100 that the union claimed. In Virginia’s Fairfax County, with a high concentration of Hispanic students, parent groups have criticized the school superintendent for repeatedly pushing back the scheduled reopening. In California, where some 70% of public school students are people of color, the governor’s plans to begin a phased reopening starting Feb. 15 is foundering because of union opposition.

The outlook on reopening schools varies by race. According to a survey of 858 parents this past summer quoted by the CDC, 62% of non-Hispanic white parents said school should open this past fall, while only 46% of non-Hispanic Black parents and 50% of Hispanic parents agreed. A more recent survey of Chicago parents by the union has also found a similar racial disparity.

“There’s much more skepticism in Black and brown communities about whether or not we can reopen schools safely,” says Randi Weingarten, president of the American Federation of Teachers, whose Chicago local union is fighting the reopening of schools. “We are fighting fear as much as we are fighting COVID.”

That fear has created a paradox: Low-income families and families of color, who have suffered the most in terms of exposure to the pandemic and its financial and educational effects, are also the most reluctant to open the schools – even knowing it will affect their own careers.

“As a Black woman who cares a lot about children of color, these children are getting less and less educated” the longer that remote learning goes on, says Yolande Beckles, a community educator in Los Angeles.

Up to now, the pandemic has helped boost teachers’ reputations in the public eye. “One of the things the pandemic has shown us is how critical they are,” says Katharine Strunk, an education professor at Michigan State University in Lansing. “Teachers are not only educators, in the sense of teaching math and science, but teachers are also social workers, they’re also first responders.”

Teachers unions may also have gotten a public relations boost. Between May 2019 and November 2020, the positive perception of teachers unions edged up from 42% to 46%, according to a survey by Education Next.

But the unions’ stance risks being undercut as teacher vaccinations expand and research shows that schools are safer than many believe. An article last week in JAMA, a journal from the American Medical Association, found that schools were not big transmitters of the virus if safety protocols are followed.

That’s a pretty big if, especially in low-income neighborhoods, where crowded dilapidated schools have inadequate ventilation and make it difficult to maintain social distancing, says Becky Pringle, president of the National Education Association, the nation’s largest teachers union. “Our Black and brown and Indigenous kids have been going to school in these dilapidated buildings that were unsafe. … [Their teachers] are saying, ‘We can’t go back to school safely without the resources’” to fix these things.

As part of its pandemic relief plan, the Biden administration is calling for at least $130 billion for K-12 schools with some portion of an additional $350 billion earmarked for state and local government aid.

Determining when those safe conditions have been reached in these schools remains in the eye of the beholder. Last week, the California Teachers Association told California Gov. Gavin Newsom, a Democrat, that schools in counties with high infection rates should remain closed for 100 days.

That doesn’t sit well with Ms. Beckles, who runs the Knowledge Shop LA, a nonprofit education center for children from less privileged families in South Los Angeles. When the pandemic hit, she quickly slimmed down her enrollment and pivoted to an all-day center where working parents could drop off their kids. The children had access to robust Wi-Fi and serviceable laptops to connect with their teachers.

While private schools in the area and her business quickly figured out how to reopen with adequate safeguards, the public school system took four to five months, she points out. “That bureaucracy does what it does: nothing. [And] at the end of the day, teachers put teachers first. That’s what the teachers union is all about.”

“If the goal is to educate children in a healthy and safe environment, the answer is not: ‘No, we can’t do this,’” she adds. “The answer is there are many ways to do this.”