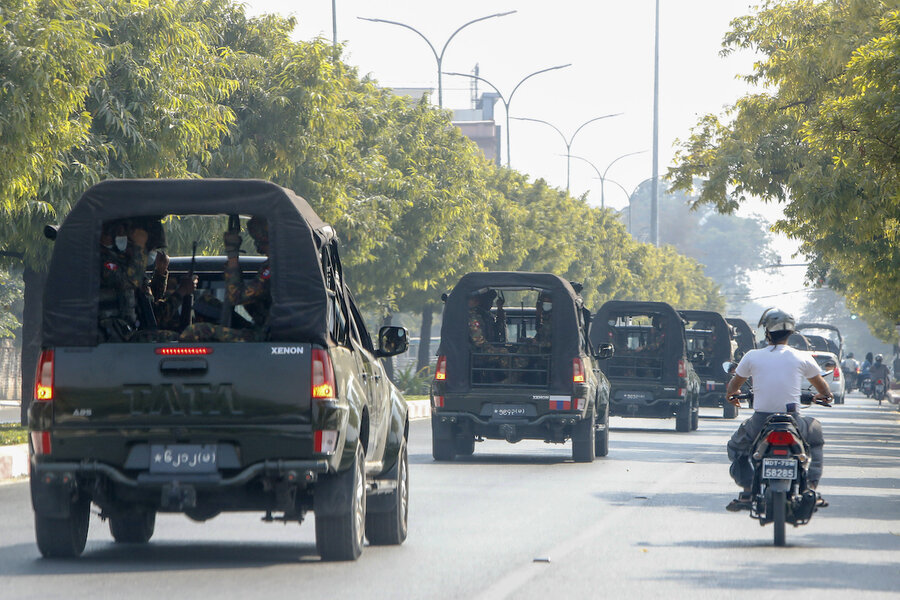 Police leveled their first formal charge against Myanmar’s ousted leader Aung San Suu Kyi, members of her party said Wednesday, giving military authorities who staged a coup a legal reason to detain her at least through the middle of the month.

The charge – that Ms. Aung San Suu Kyi was in possession of illegally imported walkie talkies – came to light two days after she was placed under house arrest and appeared to be an effort to lend a legal veneer to her detention, though the generals have previously kept her and others locked up for years.

“It was clear that the military were going to look for some legal cases against the leaders of the National League for Democracy and especially Aung San Suu Kyi to actually legitimize what they’ve tried to do,” said Larry Jagan, an independent analyst of Myanmar affairs. “And that is really a power grab.”

Police and court officials in the capital Naypyitaw could not immediately be contacted.

At the same time that authorities were working to keep Ms. Aung San Suu Kyi in detention, hundreds of lawmakers who had been forced to stay at government housing after the coup were told Wednesday to leave the capital city within 24 hours and go home, said a member of Parliament from Ms. Aung San Suu Kyi’s party who is among the group. He spoke on condition of anonymity because he feared drawing the attention of the military.

The coup was a dramatic backslide for Myanmar, which had been making progress toward democracy, and highlighted the extent to which the generals have ultimately maintained control in in the Southeast Asian country.

In response to the coup, Ms. Aung San Suu Kyi’s party has called for nonviolent resistance, and scores of people in Yangon, Myanmar’s largest city, honked car horns and banged on pots and pans on Tuesday night in a protest. Supporters of the military have also staged demonstrations.

Medical workers have also declared they won’t work for the new military government in protest of the coup at a time when the country is battling a steady rise in COVID-19 cases with a dangerously inadequate health system. Photos were shared on social media showing health workers with red ribbons pinned to their clothes or holding printed photos of red ribbons.

There were also protests in neighboring Thailand, where Khin Maung Soo, a Myanmar national, said Wednesday that he was demonstrating to “show the world that we are not happy with what happened.”

He added: “We want to the world to know, and we want the whole world to help us, too.”

The takeover marked a shocking fall from power for Ms. Aung San Suu Kyi, a Nobel Peace Prize laureate who had lived under house arrest for years as she tried to push her country toward democracy and then became its de facto leader after her party won elections in 2015.

Ms. Aung San Suu Kyi had been a fierce critic of the army during her years in detention. But after her shift from democracy icon to politician, she worked with the generals and even defended their crackdown on Rohingya Muslims, damaging her international reputation.

The international community, which had enthusiastically supported Myanmar’s nascent democracy, now faces a test. The United States has threatened sanctions and has labeled the takeover a coup. The United Nations Security Council held an emergency meeting Tuesday but took no action.

The foreign ministers of the Group of 7 leading industrial nations on Wednesday issued a statement calling for Ms. Aung San Suu Kyi and others to be released and for power to be restored to the democratically elected government.

While the military has cited the government’s failure to properly investigate allegations of electoral irregularities as one of the reasons for the coup, the state Union Election Commission has said there were no significant problems with the vote.

Analysts have said the landslide victory of Ms. Aung San Suu Kyi’s party may have caught the military by surprise – and made the generals concerned that it had too much power, even though the constitution had been carefully written to ensure the military maintained significant control, including with an allocation of 25% of the seats in Parliament.

Myanmar has confirmed more than 140,600 cases including some 3,100 deaths. Its health care infrastructure is one of the weakest in Asia, according to U.N. surveys.

A statement issued Wednesday in the name of the executive members of Ms. Aung San Suu Kyi’s party said that authorities began raiding the party’s offices in Mandalay and other states and regions on Tuesday and seized documents and laptop computers.

The statement on the Facebook page of party spokesman Kyi Toe said locks were broken at several offices. It denounced the raids as illegal and demanded that they stop.