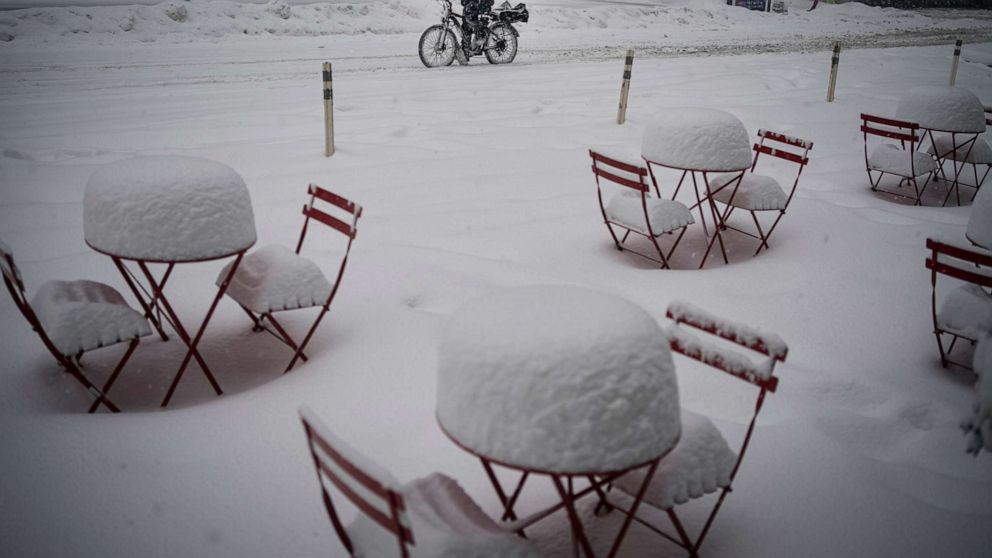 A major nor’easter is continuing to slam Northeast with heavy snow and near-blizzard conditions.

The major storm marched east after dumping the most snow in two days that Chicago has seen in the past six years, with 10 inches one day and 13 inches the next.

On Monday, 19 states from Georgia to Maine were on alert as this newly formed nor’easter moves up the East Coast.

Allentown, Pennsylvania, saw 10 inches of snow Monday, which broke a daily record, while New York City has received more than 13 inches of snow — the most the city has seen in five years.

The heaviest snow totals have been in central and northern New Jersey, which had seen up to 19 inches by Monday afternoon.

Washington, D.C., where than 2.6 inches of snow fell — the biggest snowstorm in the region in two years — is mostly done with major snow accumulation and is now expecting a wintry mix with rain and sleet the rest of Monday.

Meanwhile, freezing rain will continue in Philadelphia through Monday, with some snow mixing in and a few more inches expected.

Pennsylvania Gov. Tom Wolf issued a disaster emergency declaration for the state Monday night due to the storm.

In New York City, the heaviest snow is expected around noon and into the early afternoon Monday when snowfall rates could reach 2 to 3 inches per hour. Winds will increase, gusting about 40 to 45 mph in New York City and up to 65 mph on Long Island and coastal New England.

LaGuardia Airport announced at 10:30 a.m. that all flights had been suspended due to the storm.

In Boston, the snow has transitioned to a wintry mix of snow, ice and rain that will last until Tuesday.

Very gusty winds are expected to develop along the coast as the nor’easter strengthens off the East Coast, potentially reaching 60 mph in Massachusetts.

Gusty winds will also reach Philadelphia and Washington, D.C. with gusts nearing 35 mph. These winds could possibly down trees and power lines due to the weight of ice and snow on them.

Storm surge at the coast could also be an issue, as coastal flooding is expected with these strong onshore winds.

The slow-moving storm will continue to pummel the East Coast from Philadelphia to New York City with snow through Monday night — as much as 1 to 3 inches per hour.

By Tuesday, precipitation should lighten up for most areas, but a wraparound with additional snow is possible for Pennsylvania, New Jersey, New York and into New England, while ice and rain will continue from Long Island to coastal New England.

The snowfall totals expected when all is said and done by Tuesday night include Washington, D.C. with 2 to 3 inches, Philadelphia with 6 to 8 inches, New York City with up to 18 inches in Manhattan but up to 24 inches northwest of the city, and Boston with 6 to 12 inches.