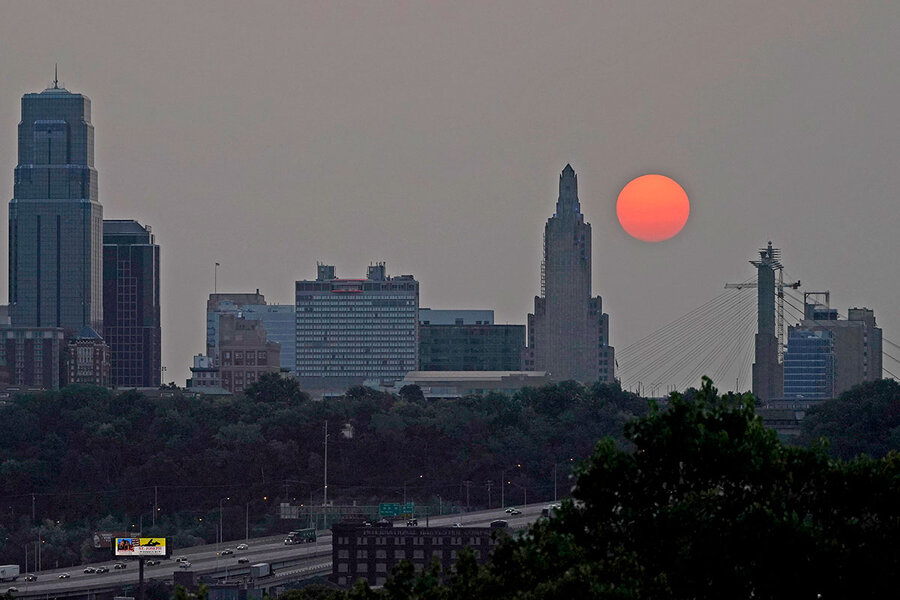 Quinton Lucas is frustrated, yet calm and composed, as he rattles off the issues facing Kansas City, Missouri, where he’s mayor.

The economic effects of the pandemic have withered the tax base. Budget cuts made in response have left less money for public health, contact tracing, and small-business relief. The city has also resorted to furloughs, reductions in services, and the elimination of vacant jobs. “People always think that’s easy,” he says of the last one. “But when you’re talking about firefighters or paramedics, which we are, it creates a real challenge.” Now the city is facing a revenue shortfall of $58 million, and in total a $70 million budget hole will need to be plugged this month.

2020 was a rough year for state and local governments. In Mr. Lucas’ state, the Department of Social Services cut some 200 jobs. In Rochester, New York, the school district – already financially troubled – laid off teachers and closed five schools. Medicaid copays increased in Colorado, and both the city of Arlington, Texas, and the governor of Ohio ordered hiring freezes.

The economic fallout from the pandemic – high unemployment and cautious consumer spending – has battered budgets that rely on sales taxes, income taxes, and other revenue related to travel, tourism, and consumer expenditures. With Democrats taking control of Congress, federal relief might be on the way. But for now, states and cities are navigating the consequences of major cuts made last spring – when revenue projections were worse – while factoring in current economic forecasts, which are improved but still uncertain. All this time, the legal requirement to keep budgets balanced has been hanging overhead.

“In the shortest terms possible, revenues are going down and expenses are going up. And whenever you’re putting together a budget, that’s a really difficult thing to deal with,” says Dan White, who studies fiscal policy at Moody’s Analytics.

In human terms, economists say, the result has been about 1.3 million local and state government jobs lost since last February – adding to unemployment lines, to say nothing of delayed or cut government services. Jobs data released by the Bureau of Labor Statistics on Jan. 8 indicates that about 50,000 state and local government jobs (including in education) were lost in December alone. On average, cities across the country have seen revenues contract 21% since the pandemic started, according to a December report from the National League of Cities (NLC).

“In the first CARES Act that came out, the $2 trillion package, there was some support for state and local [governments]. It wasn’t enough,” says Joseph Kane, a senior research associate at the Brookings Institution. Ditto for the stimulus package passed shortly before the new year.

While Congress approved some aid in both of these relief bills, much of it was narrowly targeted, or restricted to cities of certain sizes. Additionally, Congress left much of the divvying up of funds to be negotiated between state and city governments – “and in most cases, the localities don’t have much leverage,” says the NLC’s Michael Gleeson. While the funding that has come through has helped with personal protective equipment and other costs that have increased due to the pandemic, it hasn’t helped prop up jobs or general budgets, mayors and economists say.

“We were fortunate enough … to participate in the Payroll Protection [Program],” Mayor Ronny Walker of Ruston, Louisiana, says of the private businesses his wife runs. But over at mayors’ offices, “cities got no payroll protection plan at all.”

Some state budgets haven’t fared much better. In Florida, legislators will have to plug a significant budget shortfall this spring. Last May in Ohio, the state government slashed $775 million from public spending. Although Gov. Mike DeWine recently restored some of the funding, given that worst-case budget projections haven’t come to pass, $390 million in cuts remain in place.

On the one hand, when revenues – in this case, mostly taxes – decline, expenditures have to follow suit. But the federal government can change the equation by injecting funds. It “sits in a unique position [in] that it can stimulate activity,” says Mr. Kane of Brookings. “This is not the time to be like, ‘We need to cut back.’”

Mr. White of Moody’s Analytics agrees that while the federal government’s aid to state and local governments has had its bright spots, and some places have fared better than others, the current level of stimulus hasn’t been enough. Still, as some state budgets start to balloon with pension and Medicaid costs, it could force improvements: Tighter budgets are “going to make government think of better and more efficient ways to do things,” and could lead, in the long term, to a more efficient delivery of services. But with state and local government jobs at their lowest level since 2001, Mr. White says, the economy is missing out on “relatively well-paying, mid-wage to high-wage jobs” – and will be for a while.

It’s also important to watch how public sector layoffs play out along racial and ethnic lines, says Mr. Kane, noting that “a lot of Black and Hispanic workers in particular have been hit very hard. And some of those same workers depend on transit systems to get to work, so they’re hit that way, too.”

Balanced budgets – but at a cost

At the beginning of the pandemic, Mayor Nan Whaley of Dayton, Ohio, “didn’t know what the bottom was going to be” in terms of revenue lost. Things have since improved, and the city was able to balance its 2020 budget and pass one for 2021, but it came at a cost: The city furloughed 25% of its workers last spring, and as it started bringing people back to work, it put out calls for voluntary layoffs. Just over 100 workers took one. The employees union took a pay cut, as did management. Without federal funding, the city won’t be able to hire a new class of firefighters or police officers.

“When you do a voluntary separation, voluntary buyout, you have huge holes in the organization,” Ms. Whaley says, citing the fact that the city’s housing inspection unit lost a number of employees. “Well, then that puts us in a big hole in housing inspection. And we haven’t adjusted to that yet because we don’t know what ’21 is going to be like, and we don’t know if we’ll be able to afford it. So you can lose large swaths of an organization that way.”

Public sector layoffs can also hamper recovery in the private sector. With fewer people around to approve permits and sign off on private sector development, “those projects will be stalled out,” says the NLC’s Michael Wallace.

Some eight months into the pandemic, reported COVID-19 cases hit record levels in the United States. As long as life is disrupted by the pandemic, local government budgets will be disrupted as well.

“We live off of conventions, we live off of football games, we live off of those big kinds of activities. People come to the city for Christmas celebrations, and shopping, and parades after Super Bowl wins,” says Mayor Lucas of Kansas City. “Those are the sorts of things that actually have generated significant revenues for Kansas City over the years.”

And with budgets in disarray, cuts are unavoidable, including to non-police public safety and youth outreach programs. Such programs received renewed attention and interest in 2020, a historic year for calls for police reform across the country. “It’s not lost on me,” says Mr. Lucas.

In some ways, things were easier at the beginning of the pandemic.

“You know, a year ago or certainly in March and April when this was first coming on, we still had strong budgets. We still had money at the local level to address these issues,” Mr. Lucas says. “Now we’re addressing issues with a $70 million budget hole. So I have concerns. But we’ve been through a lot in this city, this state, and this country, so I imagine we’ll get through it.”