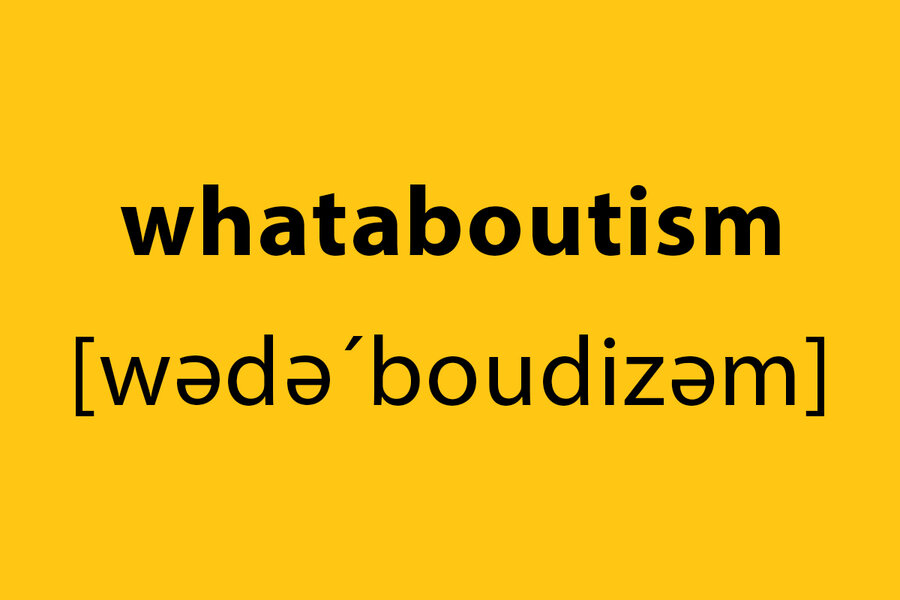 I was making what I considered to be a fair point when my friend objected, “That’s whataboutism!” I had first heard that term only a few weeks before, when, following the Jan. 6 attack on the Capitol, it seemed to be everywhere. The New York Times, for example, decried the “whataboutism, misdirection and denial” of Republicans, while the New York Post condemned Democrats for “embrac[ing] whataboutism.”

Whataboutism is an old rhetorical technique. If Mary accuses John of something, John responds by accusing Mary of something: “What about … ?” The implication is that Mary, with her faults, has no right to criticize John. As Merriam-Webster puts it pithily, whataboutism forces us to ask, “If everyone is guilty of something, is no one guilty of anything?”

The term first appeared in English in 1974 (as whataboutery) during the “troubles” in Northern Ireland, when both sides used this technique to justify the cycle of shootings and bombings. But whataboutism had been perfected decades before, in the propaganda of the former Soviet Union. According to chess grandmaster and political activist Garry Kasparov,  bureaucrats were trained to respond to criticism of Soviet massacres, forced deportations, and gulags with “What about how you Americans treated the Native Americans and the slaves?” In other words, the United States had no right to criticize Soviet human rights violations because it had committed some of its own.

Whataboutism is still a strategy of Vladimir Putin. When pressed on his 2014 invasion of Crimea, the Russian president said, in essence, “What about the U.S. annexation of Texas in 1845?”

Former U.S. President Donald Trump was also a “whatabouter.” When the 2017 “Unite the Right” rally in Charlottesville, Virginia, became violent, he refused to blame the white supremacists involved, countering, “What about the alt-left?” His supporters have leaned heavily on this technique in the aftermath of the insurrection at the Capitol, responding to condemnation of it with “What about BLM/antifa?” The left, they imply, is hypocritical in denouncing the Capitol riots while supporting last summer’s Black Lives Matter protests.

Whataboutism isn’t necessarily “bad.” Pointing out hypocrisy can be a way of establishing behavioral norms, making sure people on all sides of an issue adhere to the same standards. But it is dangerous when one “what about” leads to another. Since no one is perfect, we give up striving to do better. As Claire Fallon put it in HuffPost: “Forever circling around each other’s hypocrisies pulls us away from necessary conversations about how to reach for and enforce the values we aspire to and hold each other accountable for wrongdoing.”