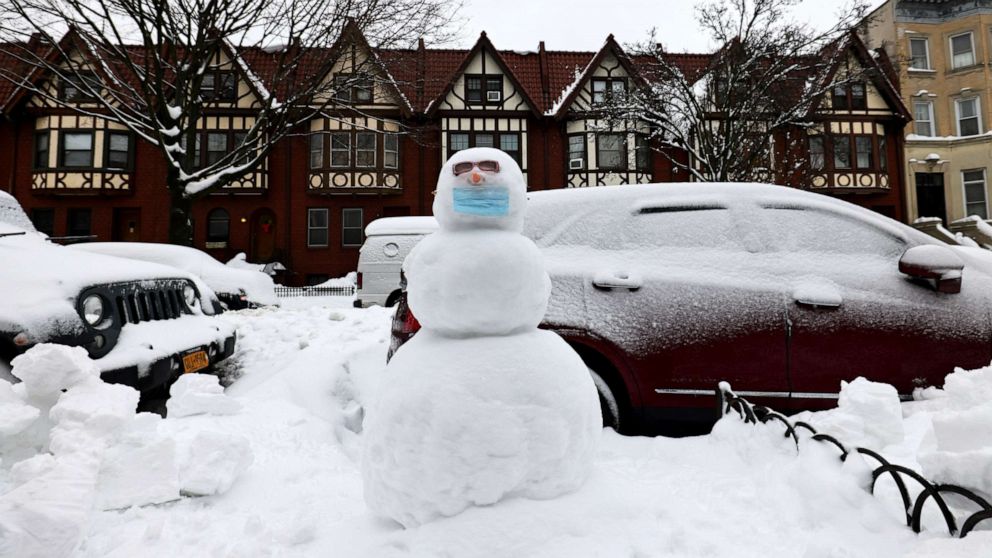 The nor’easter slamming the East Coast is bringing more than 2 and a half feet of snow, winds of over 70 mph and coastal flooding.

The highest snowfalls were in Montague, New Jersey, where a whopping 33.2 inches of snow fell, and Nazareth, Pennsylvania, where the accumulation clocked in at 33 inches.

Washington, D.C. had 2.6 inches of snowfall, while Philadelphia had 7.7 inches. New York City got 17.2 inches, and Boston ended up with 1.2 inches.

The heaviest wind gusts were in Cape Cod, Massachusetts, at 70 mph and Bay Head, New Jersey, at 63 mph. Winds got up to 51 mph at New York City’s John F. Kennedy International Airport.

It continued to snow in Washington, D.C., and along the I-95 corridor from Philadelphia to New York City on Tuesday morning, so the total accumulations may increase by another inch or two.

There are 19 states that continue to be under winter alerts for snow and ice from Georgia to Maine on Tuesday as the slow coastal storm moves through.

The heaviest snow on Tuesday will be in western and northern New York and into northern New England, where more than a half a foot of snow could fall.

Meanwhile, a new storm is expected to cross the country this week and could bring another bout of snow and heavy rain from the West Coast to the Northeast.

This storm is hitting the West on Tuesday with rain from Seattle to San Francisco as well as some expected snow in the mountains where, locally, a couple of feet of snow is expected in the Sierra Nevada Range in California.

By Thursday, this storm will hit the central U.S. with more snow and rain for the Midwest and the Great Lakes, including Chicago and Minneapolis.

By Friday, this same storm will move to the East Coast with rain for the I-95 corridor and snow for inland areas.

Right after that storm, however, there could be another coastal storm just in time for Super Bowl Sunday with heavy snow possible even for coastal cities such as New York City.