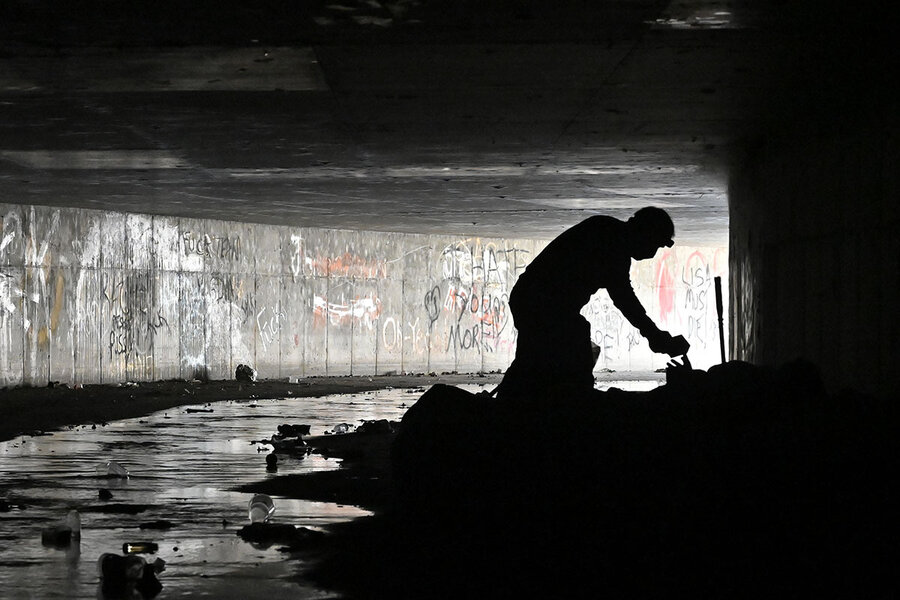 As United States President Joe Biden vows to tackle the country’s housing affordability crisis, one group is trying to convince cities they can end homelessness outright armed with one thing: better data.

For homeless service providers across the U.S., late January means the “point-in-time” count, an annual survey of homeless individuals, in which volunteers spend a single night combing streets, parks, and forests for people sleeping rough, or living in cars or tents.

The federally mandated count offers a key snapshot of the unhoused population, but the data has long been criticized by some homelessness advocates.

Local officials send their findings to the federal government and get back aggregated statistics 11 months later, he told the Thomson Reuters Foundation.

“It’s data for someone else – it doesn’t give us any insight to improve our system. We don’t know who these people are and what they need.”

Now the pandemic has complicated the annual count, and many local officials are calling it off for this year due to public health concerns.

As of Jan. 21, nearly 60% of point-in-time counts had requested exemptions or waivers, according to figures from the U.S. Department of Housing and Urban Development (HUD).

Instead, the agency is allowing communities more flexibility in how they determine this estimate. And for some, Built for Zero thinks it has an answer: using the constantly updated homelessness data it has been helping cities produce since 2015.

Unlike the once-a-year federal tally, Built for Zero cities create a comprehensive list of people experiencing homelessness, including information on their situation and needs, that is updated at least monthly, Mr. Maguire and other organizers said.

Local groups and agencies involved in homelessness response not only have access to this “by-name” list but regularly come together to address each individual case and any obstacles standing in the way of getting them housed.

She called HUD’s decision on this year’s count a major step and urged the department to make the change permanent and provide funding “so every community can collect real-time, quality data.”

HUD did not respond to requests for broader comment.

‘Adding a year of homelessness’

Built for Zero’s name comes from its aim to bring homelessness down to what supporters call functional zero, “where homelessness is rare overall, and brief when it occurs,” according to the project website.

Fourteen communities working with the program have reached this point for either homeless veterans or chronic homelessness – when someone has been homeless repeatedly or for at least a year – and more than 80 jurisdictions are currently participating.

Mr. Maguire recalls a Los Angeles workshop early on in the project, where the group brought together local officials and others to map the process for a homeless person to get housing.

The teams figured it took an average of 389 days and 44 steps for one person to get through the process, Mr. Maguire noted.

“So, you’re adding a year of homelessness to someone’s experience,” he said.

They realized that constantly updating the data and looking at individual cases can help dramatically cut down this wait, sometimes to 30 days or less.

That was a major help for Marvin Minor Jr. of Lynchburg, Virginia, who experienced homelessness from July to December of last year, eventually living in his car until a respiratory illness forced him into the hospital for weeks.

He was referred to homeless outreach specialists and placed into a process that had been created with Built for Zero, which led to getting Mr. Minor quickly into housing.

Within a week, he had been placed in a motel, and shortly thereafter he moved into his own apartment.

“By having a [home] of my own, now I’m able to wash and bathe, cook, have fresh food, and clean clothing. I just became a grandfather a few months ago, and now it’s a place where my granddaughter can come,” Mr. Minor said by phone.

Last year, Lynchburg achieved “functional zero” for veteran homelessness – from about 20 homeless vets in 2019 – and the federal government has acknowledged Built for Zero’s efforts nationally.

Randal Noller, spokesman for the U.S. Department of Veterans Affairs, highlighted in an email the initiative’s use of real-time data to analyze the “inflow” of those entering homelessness.

That issue has been key for Lynchburg, which is now shifting its focus to ending chronic homelessness.

“The change is that no one gets forgotten – there’s an accounting that has to happen for every single [person],” said Sarah Quarantotto, executive director of Miriam’s House, a nonprofit that leads the Lynchburg effort.

Rosten Callarman, coalition coordinator for the West Texas Homeless Network, has been working with Built for Zero in Abilene, Texas, one of five communities that the program considers to have ended chronic homelessness.

He said the project represents a shift in attitude for homelessness service providers.

Usually, he explained, “the talk is not about progress, but about maintaining the system as it is. It’s very pessimistic, a sense that homelessness is not something that can be fixed.”

Some anti-homelessness advocates worry that Built for Zero’s strategy potentially glosses over critical gaps in efforts to eradicate the problem.

“This idea of functional zero is not actually ending homelessness,” said Megan Hustings, deputy director of the Washington, D.C.-based National Coalition for the Homeless.

Ms. Hustings acknowledged that the program has built a system that can identify people who need housing and quickly get them resources.

But, she worried that by saying they have ended homelessness in an area, the community can assume the issue has been addressed.

That does little to tackle the root causes of homelessness, she said, primarily the major shortfall of affordable housing nationwide.

For Katie Hong, director of special initiatives at the Raikes Foundation, where she has focused on youth homelessness, understanding the inflow and outflow of homelessness can help the response as a whole.

The sector has long focused on crisis response, with no incentive for other systems – hospitals and prisons, for example – to take responsibility for those moving into homelessness, she said.

With COVID-19 and the eventual end of eviction moratoriums, “everyone is now bracing for the inflow,” Ms. Hong said by phone.

“I don’t think we’ve gotten smart enough as a community to understand that this is a dynamic problem. If we don’t talk about that, it makes it seem like we’re not making progress.”