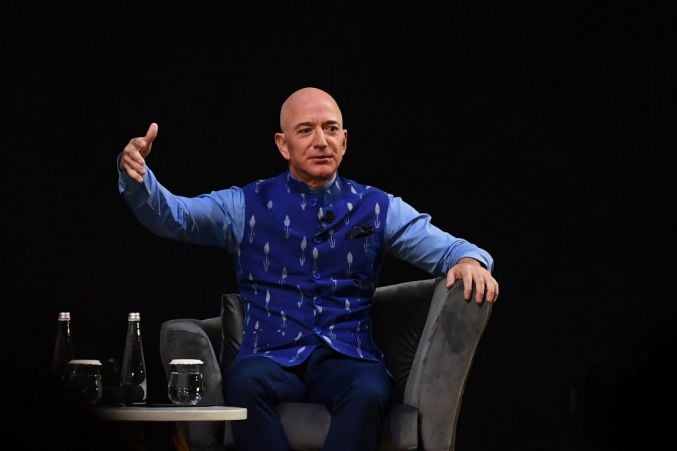 Jeff Bezos had already become a senior vice-president at a Wall Street hedge fund before founding Amazon, a journey which would lead him to become the richest man in the world.

The 57-year-old, a graduate of Princeton where he studied electrical engineering and computer science, shunned job offers from Intel and Bell after leaving university.

Instead, he took a job with start-up Fitel, a financial technology firm where he worked on their networks and systems, before moving into banking.

But it was Amazon, launched in 1995, which catapulted Bezos into the public eye.

Yep, that’s me. I was lucky to be exposed to tech and coding at a young age. Inspired a lifelong love of invention. I hope the new Amazon Future Engineer program does the same for some kids today. https://t.co/xNUdyVMOnb pic.twitter.com/RPZEiIHSap

It began life as an idea conjured on a road trip between New York and Seattle and started as an online bookstore.

Since the early days, the website has been prone to fast growth, with sales rising above $20,000 a week within two months of launch.

This growth led the firm to expand into other items and soon Amazon established itself as the market leader in online stores.

Having become the world’s largest online retailer – selling everything from CDs to food and toys – Amazon has turned its attention to electronics software and hardware in recent years, becoming one of the biggest companies on the planet in the process.

Bezos also oversaw Amazon’s first venture into the area of consumer electronics, the Kindle eReader which launched in 2007, and has since expanded into tablets, and the Echo smart home speakers.

The company also runs Amazon Web Services (AWS), the on-demand cloud-computing platform which has become a vital cog in the structure of the internet.

Outside of Amazon, Bezos, much like Tesla co-founder Elon Musk, has expressed an interest in space exploration and founded start-up Blue Origin in 2000. He has said he wants to see humans live on other planets to preserve Earth’s resources.

He also has an interest in the media, having purchased The Washington Post in 2013.

Bezos became the world’s first centi-billionaire in 2018, when the Forbes list of the world’s billionaires ranked him top with a fortune of $112 billion.

Mr Musk overtook him as the world’s richest person last month amid a boom in Tesla’s share price.

The Amazon founder married MacKenzie Scott in 1993 and the couple had four children – three sons, and a daughter adopted from China – before divorcing in 2019.

He announced he would be stepping down as chief executive of Amazon in the second half of 2021, handing the reins to Andy Jassy, CEO of AWS.

Mr Bezos, who will become Amazon’s executive chairman, wrote in a blog post to staff: “I will stay engaged in important Amazon initiatives but also have the time and energy I need to focus on the Day 1 Fund, the Bezos Earth Fund, Blue Origin, The Washington Post, and my other passions.

“I’ve never had more energy, and this isn’t about retiring.”