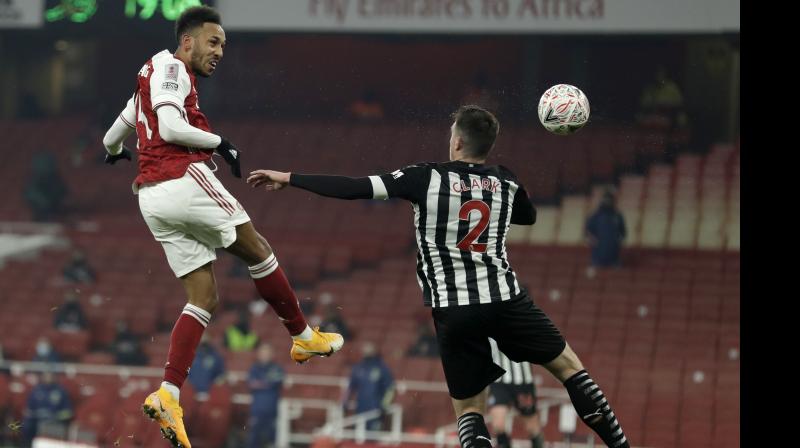 The rampaging Covid-19 virus is casting a lengthening shadow over football in England, with dozens of games called off and growing fears over whether the season can be completed.

Just one match has so far been called off in the FA Cup third round — the stage at which the big guns enter the competition.

But a number of clubs have been forced to make radical alterations to their line-ups after suffering outbreaks.

Arsenal, 14-time FA Cup winners, continued their recent revival with a fourth straight win in all competitions in their all Premier-League tie at the Emirates.

Magpies captain Jamaal Lascelles made his first appearance in six weeks after being hit hard by the Coronavirus as both sides made multiple changes.

Emile Smith Rowe — who earlier had a red card overturned after a VAR check — broke the deadlock in a disappointing game, drilling the ball home in the second half of extra time, and Pierre-Emerick Aubameyang made the game safe.

Mikel Arteta turned his attention to the Premier League match against Crystal Palace on Thursday.

In the late match, Manchester United beat Championship side Watford 1-0, courtesy of an early header from midfielder Scott McTominay.

United boss Ole Gunnar Solskjaer hailed the Scotland international, who was captaining the side for the first time.

Earlier, Derby fielded a clutch of youngsters after their first-team squad and interim manager Wayne Rooney were ruled out following a virus outbreak at the Championship club.

Chorley, from the sixth-tier National League North, took advantage of Derby’s weakened line-up to reach the fourth round for the first time with a 2-0 win.

Chorley’s modest Victory Park ground is so homely that one fan was able to watch over their back garden fence, while two others used a cherry picker crane to get a glimpse of the action.

In freezing conditions, with snow cleared off the pitch before kick-off, the home side took an early lead through Connor Hall and Mike Calveley poked home from close range in the 84th minute.

The cup upset was a welcome boost for Chorley manager Jamie Vermiglio, whose job as a primary school headteacher has been thrown into chaos by the coronavirus lockdown in Britain.

“It’s a very proud moment for us,” he said. “Credit to our boys, they’ve been on a journey and we said it before the game, the journey can continue today and it has done.”Liverpool beat virus-plagued Aston Villa 4-1 on Friday, with their opponents missing their entire first-team squad and boss Dean Smith due to a Covid outbreak.

Southampton’s tie against Shrewsbury on Sunday has been postponed after several positive tests at the League One club.

A record 40 positive coronavirus tests were detected among Premier League players and staff in the week between December 28 and January 3.

For now, the FA Cup action goes on and Premier League strugglers West Brom were victims of an upset at Bloomfield Road, losing on penalties to third-tier Blackpool after a 2-2 draw.

There were also wins for Premier League sides Everton, Fulham and Burnley.

The highlight of Sunday’s fixtures is eighth-tier Marine at home to Jose Mourinho’s Tottenham, while Manchester City play Birmingham and Chelsea entertain Morecambe.