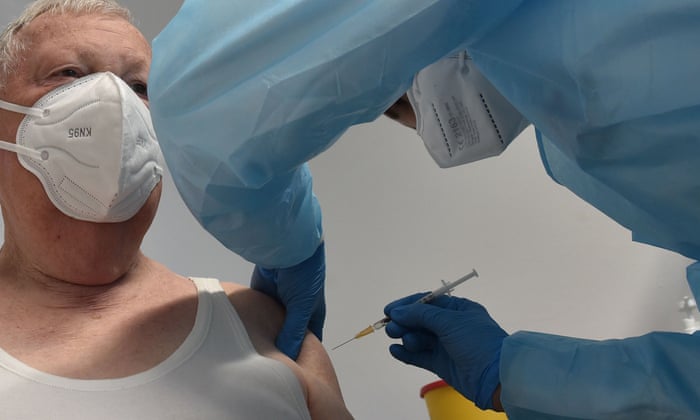 One dose of the Pfizer/BioNTech vaccine gives people about 90% protection from Covid by 21 days, according to an analysis of Israel’s mass vaccination programme.

The data analysis, carried out by researchers from the University of East Anglia with UK government funding, runs counter to an earlier study from Israel which suggested that one dose may not give adequate protection.

Prof Nachman Ash, in charge of the Israeli vaccination effort, said last month that a single dose appeared “less effective than we had thought”, and was also lower than Pfizer had suggested. Pfizer had said efficacy was 52% after a single dose.

But Prof Paul Hunter and Dr Julii Brainard say their reanalysis of the data, which has not been peer-reviewed, shows high protection just before the second dose was given at 21 days. However, they warn that the risk of infection doubled in the first eight days after vaccination – possibly because people became less cautious.

The UK took the decision to give the second doses of both the Pfizer/BioNTech and Oxford/AstraZeneca vaccines up to 12 weeks after the first dose to maximise the number of people protected.

“But this decision caused criticism from some quarters due in part to a belief that a single injection may not give adequate immunity,” said Hunter, from UEA’s Norwich medical school.

“A recent non peer-reviewed pre-print paper based on Israel’s experience looked at data from 500,000 people who had been given the Pfizer vaccine. It reported that a single dose may not provide adequate protection.

“But we saw a number of flaws in how they looked at the data including the fact that they did not attempt to estimate the effectiveness of the vaccine from day 18 onwards. This would have given a better indication of how effective a single dose of the vaccine could be if the second dose was delayed by up to 12 weeks.”

Case numbers in Israel increased among those given an initial dose, they say, up to eight days after vaccination, and then declined.

“Surprisingly, the daily incidence of cases increased strongly after vaccination till about day eight – approximately doubling. We don’t know why there was this initial surge in infection risk but it may be related to people being less cautious about maintaining protective behaviours as soon as they have the injection,” said Hunter.

“We found that the vaccine effectiveness was still pretty much zero until about 14 days after people were vaccinated. But then after day 14 immunity rose gradually day by day to about 90% at day 21 and then didn’t improve any further. All the observed improvement was before any second injection.

“This shows that a single dose of vaccine is highly protective, although it can take up to 21 days to achieve this.”

He believes this should be reassuring for the UK. The researchers do not know how long protection will last after a single shot, he said, but “we are unlikely to see any major decline during the following nine weeks”.