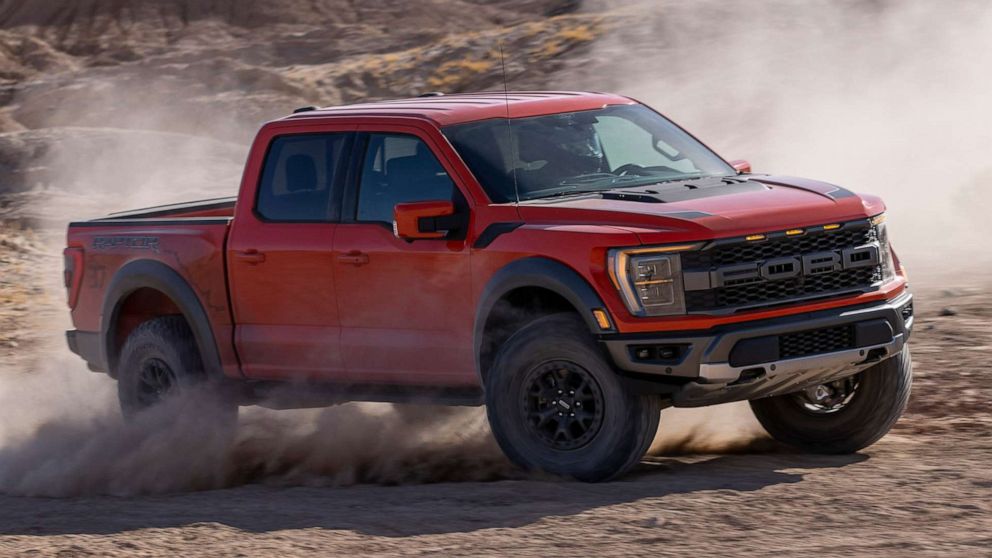 Ford has pulled the wraps off its latest F-150 Raptor: a high-performance pickup truck designed to reach high speeds on tough terrain.

The truck enters an automotive landscape markedly different from the one the first generation Raptor saw when it was unveiled over a decade ago. In the intervening years, the off-road performance market has become crowded with competitors from legacy automakers like General Motors and Stellantis, as well as high-tech startups like Rivian.

“That tidal wave of other products that were really generated from the Raptor — it’s kinda crazy,” said Ivan Drury, senior manager of insights at Edmunds, an automotive information company. “I mean, it really did start a trend.”

The Raptor is based on Ford’s F-150 pickup truck, which is regularly the best-selling vehicle in the United States. While Ford doesn’t release specific sales data for the Raptor trim level, the company said the truck has outsold Porsche’s entire lineup of vehicles for the past four years.

The attention paid to off-roading has only become more acute during the coronavirus pandemic, Drury said.

“There’s such a focus on this segment of ‘I want to get outdoors,'” he said, “which was then even exacerbated by the pandemic because you couldn’t go anywhere else.”

This is the third generation of the Raptor. The first model rolled out for the 2010 model year with a 5.4 liter V8, which was later updated to a bigger, 6.2 liter powerplant. The second generation downsized the engine to a twin-turbo V6, which carries over to the new truck.

But as Tony Greco, the Raptor project manager, explains, Ford doesn’t want this new generation to be defined by its engine.

The 2021 Raptor comes with specialty “FOX” shock absorbers, as well as a completely new rear suspension setup that features coil springs instead of the simpler leaf spring setup the old truck employed.

The new Raptor can also be optioned with the largest tires ever fitted to a light-duty mass production pickup, at 37 inches tall. That, combined with the truck’s suspension system, means it has over 13 inches of ground clearance.

“The 37-inch tire is kinda like the cherry on top of this whole thing,” Greco said. “That was always in the back of our heads. We wanted to do it, just took that extra effort to finally do it this time.”

General Motors capitalized on the primed off-road market in 2017 with a midsize pickup, the Chevrolet Colorado ZR2. Over the summer, the company also announced it would be resurrecting the “HUMMER” brand on a new electric “supertruck” under the GMC brand. GMC said the new truck can be optioned with up to 1,000 horsepower and can accelerate from zero to 60 miles per hour in just three seconds.

Ford hasn’t released official power figures for the new Raptor, but the current, second-gen truck is rated at 450 horsepower. As for whether Ford is considering an electric powertrain in future Raptors, Greco didn’t rule it out.

“Obviously as the trend goes more towards electric, we can’t take anything off the table,” he said.

The clearest Raptor competitor came when Stellantis, the automotive conglomerate formerly known as Fiat Chrysler Automobiles, debuted its own high-performance pickup over the summer. The Ram 1500 TRX is rated for over 700 horsepower from a 6.2 liter supercharged V8.

The TRX name is a nod to the Tyrannosaurus rex, a prehistoric reference that didn’t escape the truck’s designers. A graphic under the hood of the TRX depicts a cartoon T. rex eating — of all things — a raptor. Greco wasn’t impressed.

“Yeah, we knew TRX was going to throw a big giant motor into a truck and call it an off-road,” he said. “And we’ll see when the shootouts come out… I’m not afraid of anybody.”

This week’s Raptor announcement also noted that a V8 “Raptor R” is in the works for 2022.

But Ram’s social media team is keeping the pressure on. Last week, the Ram Trucks account replied to Ford’s official Raptor announcement on Twitter, asking the blue oval to “POP THE HOOD.”