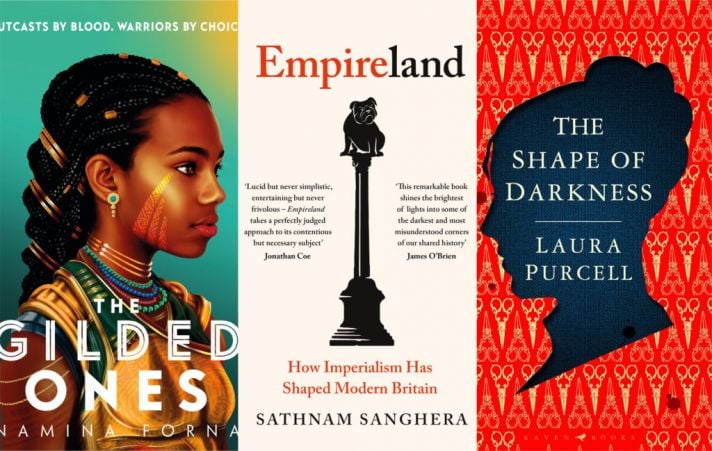 From chilling historical fiction to fantasy with a feminist heart, these new releases are quite enthralling…

.@spookypurcell returns with her latest gothic story of shadows and silhouettes in #TheShapeofDarkness

The Shape Of Darkness is the latest spooky page turner from Laura Purcell. It tells the tale of silhouette artist Agnes as she investigates the terrible goings-on that seem to be plaguing her in Victorian Bath. In doing so, she meets Pearl, a child spirit medium who appears to be key to finding the villain responsible for a string of murders. Not one to read alone at night,

Purcell weaves an eerie web of complex family relationships that she slowly unwinds as her characters attempt to separate illusion from reality. With genuinely spine-tingling unease, the reader reaches the final revelation of the book with equal parts confusion, relief and sorrow.
7/10
(Review by Julia Saqui)

Can life really be worth living without death? This is what poet Salena Godden’s debut novel ponders. We follow Wolf, a struggling orphan trying to make a living as a writer, who is stalked across London by Mrs Death – a poor, old, black, homeless woman.

When they finally meet, he becomes obsessed with capturing her stories. From Jack the Ripper and the Moors murderers, to a German backpacker killed in Ireland, we track Mrs Death and Wolf in a frantic trip through time, as Wolf tries to come to terms with the deaths in his own life,  and finds himself anxiously left wondering what is and isn’t real. Mrs Death Misses Death is a fascinating use of true crime and shines a light on social injustices, but the interjections of poetry often distract from the storyline and make it more difficult to feel fully invested in the characters and narrative.
7/10
(Review by Emma O’Neill)

When you're competing to be the best, you need KILLER instincts. @AuthorAllieR 's exhilarating debut thriller #Shiver is OUT NOW! https://t.co/TKMdvrUNNg pic.twitter.com/a8gvMV7H3J

With TV rights already sold, this major debut centres on sinister goings-on during a reunion of snowboarders who find themselves holed up in a remote ski resort in the French Alps. The five friends, who don’t know who sent the reunion invitation, haven’t seen each other since the mysterious disappearance of another friend – a beautiful and talented snowboarder – and try to piece together what happened to her.

Suspicions unfurl in a timeframe that bounces between the present day and 10 years ago, with bed-hopping, mistrusts and the bitchiness of competition ever-present. Allie Reynolds, a former UK top 10 snowboarder, is at her best when describing the fear of the half-pipe, the painful falls, the chilling, unforgiving weather and icy terrain, but the relationships between the five protagonists feel clunky and forced, and the story concludes with a somewhat predictable ending.
6/10
(Review by Hannah Stephenson)

4. Empireland: How Imperialism Has Shaped Modern Britain by Sathnam Sanghera is published in hardback by Viking, priced £18.99 (ebook £9.99). Available now

Publication day! Bookshops are closed sadly but thanks to everyone nevertheless trying to get their hands on #EmpireLand from @VikingBooksUK @PenguinUKBooks. There are a load of online options: https://t.co/jtj6IzJbCn pic.twitter.com/Qe9dP16Yk9

The British Empire is a paradox, according to journalist and author Sathnam Sanghera. Although many see it as a distinctive force, it was in many ways a relatively incoherent, almost accidental phenomenon; more a coalition of commercial interests than a codified national project. At its door can be laid slavery, systemic racism, massacres and atrocities, yet it paved the way for the NHS and Britain’s modern multiculturalism. And although it might all seem to have happened a long time ago, notions of empire continue to haunt the British – and perhaps especially, the English – imagination to this day. Empireland is a wide-ranging survey of Empire and its after-effects, where Sanghera examines his subject through a range of potent lenses. From the debate on the restitution of cultural artefacts to attitudes towards immigration, to Brexit exceptionalism, he contends we can only really move on as a nation when we learn to look our past squarely in the face. Clear-sighted, provocative and timely, this is a book to challenge assumptions and ignite a thousand debates – many of them hopefully productive.
8/10
(Review by Dan Brotzel)

5. The Gilded Ones by Namina Forna is published in paperback by Usborne, priced £8.99 (ebook £3.99). Available February 4

In The Gilded Ones, Namina Forna delivers a powerful feminist anthem in a dazzling fantasy land. Sixteen-year-old Deka lives in the patriarchal kingdom of Otera, where women are subservient in accordance with religious doctrine.

When Deka bleeds gold during the Ritual of Purity, she’s identified as a demon and an outcast. So begins her journey towards survival, identity and, ultimately, freedom. Forna’s work in scriptwriting has doubtless helped her create the spectacular world of Otera: vibrant with colour and steeped in mysticism and beauty.

It’s the confidence with which Forna delivers the pain caused by patriarchy, and the coming-of-age sisterhood that ensures Deka’s survival, that gives this story real credibility and depth. This is an empowering and unputdownable read that’ll be enjoyed by teenagers and adults alike.
9/10
(Review by Nicole Whitton)

HARDBACK (FICTION)
1. Hamnet by Maggie O’Farrell
2. The Mask Falling by Samantha Shannon
3. The Thursday Murder Club by Richard Osman
4. Girl A by Abigail Dean
5. The Survivors by Jane Harper
6. One August Night by Victoria Hislop
7. The Betrayals by Bridget Collins
8. Shuggie Bain by Douglas Stuart
9. Luster by Raven Leilani
10. The Mirror And The Light by Hilary Mantel
(Compiled by Waterstones)

HARDBACK (NON-FICTION)
1. The Boy, The Mole, The Fox And The Horse by Charlie Mackesy
2. Women Don’t Owe You Pretty by Florence Given
3. Empireland by Sathnam Sanghera
4. A Promised Land by Barack Obama
5. Pinch Of Nom Quick & Easy by Kay Featherstone & Kate Allinson
6. Ottolenghi Flavour by Yotam Ottolenghi & Ixta Belfrage
7. My Garden World by Monty Don
8. All The Young Men by Ruth Coker Burks
9. Cook, Eat, Repeat by Nigella Lawson
10. This Sovereign Isle by Robert Tombs
(Compiled by Waterstones)