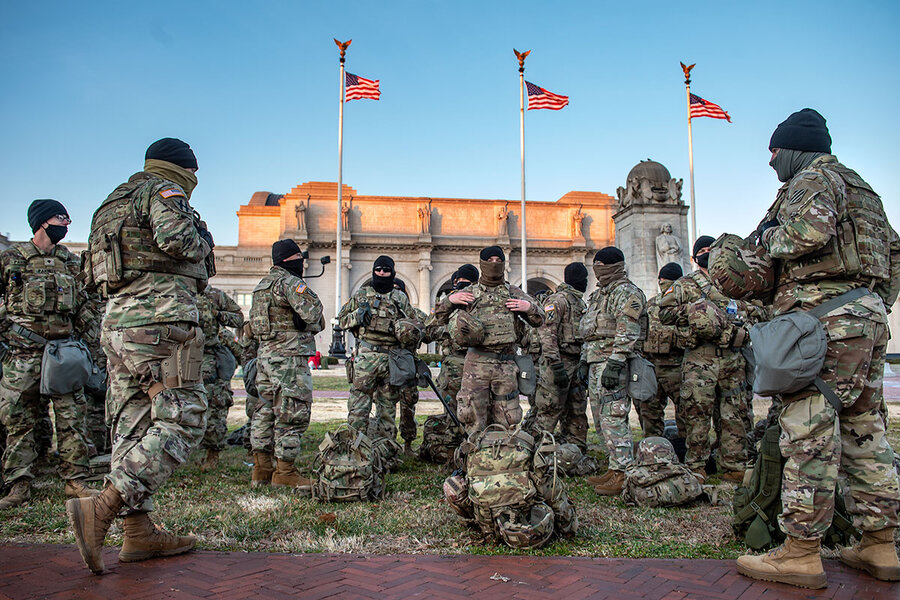 The process of determining who is destined to be at the receiving end of such measures has begun, and so far 14% of those charged in the Capitol insurrection are current or former members of the military. (Active-duty military personnel make up less than half of 1% of the U.S. population; veterans make up 7%.)

Without excusing treason, the debates about consequences also indicate some measure of sympathy for those who truly believed they were following the orders not only of a president, but also a commander-in-chief who relentlessly swore the election was rigged and the nation in danger. That message was amplified by many conservative news outlets and foreign-backed social media accounts that prey on military service members – and on veterans who, while not still under oath to serve their country, may nonetheless feel they are.

While “there’s always a case for compassion,” says Air Force veteran Loren Moore, echoing the sentiments of many vets, “it doesn’t mean you can take steps to overthrow democracy.”

Jeremy Butler, a former Navy officer and now a reservist, was previously stationed at the Pentagon and spent many hours on Capitol Hill. Sitting in his New York City apartment watching the news on Jan. 6 “was literally like watching your home being invaded,” he says.

Now the CEO of Iraq and Afghanistan Veterans of America, Mr. Butler says the first order of business is for the government to do “an excellent job tracking down everyone who took part in this.”

The fact that there were military participants in a riot filled with Confederate symbols, “Well, that’s probably more of a surprise to the civilian population than to those of us who have been in the military,” he says, pointing to a recent Military Times survey which found that one quarter of service members have seen evidence of racism in the ranks.

But while those who invaded the Capitol “definitely need to be punished appropriately, I would never advocate for taking health care away from anybody – particularly mental health care, which potentially plays a bigger factor here than perhaps we realized,” Mr. Butler says. “If you’re already suffering from some level of mental health issues and you have your president and commander-in-chief saying, ‘Go to the Capitol and take back our democracy’ with very strong martial language directed at his followers, it’s obvious to me why they interpreted it that way.”

Military members “who fall prey to this [misinformation] may feel a duty to act, really believing that they’re protecting this country,” Ms. Moore says, pointing to Jacob Fracker, a corporal in the Virginia National Guard who has been arrested for, among other things, violent entry of Capitol grounds. “My entire adult life has been dedicated to protecting my fellow Americans,” Cpl. Fracker said in a statement to The Roanoke Times, adding that his actions were an “expression of grief against what very many Americans would consider tyranny.”

Going beyond the symptoms

For a number of those who took part in the Capitol riots or who join militias, having served in the military “is their primary identifier,” Mr. Butler adds. “It plays into their sense of self-worth, mission, purpose – it really ties back to everything.”

Separating from the military after service can lead to a feeling of dislocation, say veterans, many of whom advocate for the Pentagon to establish better programs for those moving from military to civilian life. In particular, this transition time has been shown to make vets easy prey for extremist groups, who like to recruit them specifically for their street credibility and military training.

For this reason, some within the military community advocate for service members and veterans found to have taken part in the storming of the Capitol to lose their benefits until they complete a mandatory de-radicalization program. Better civics education wouldn’t hurt either, they add, to drive home the point of the military oath, why democracy is important, and why “security shouldn’t be the driving force of the nation,” Ms. Moore says, pausing to add, “along with your standard critical thinking skills.”

But as valuable as exploring root causes can be, legal defenses in which service members take a “just following orders” tack have been largely panned. “There’s no confusion at all in the military about whether you should follow an unconstitutional order. It’s ingrained early on that your oath is to the Constitution, not your chain of command,” says Lindsay Rodman, a former Marine lawyer who is now executive director of the Leadership Council for Women in National Security. “I don’t have any problem with reinforcing that message through accountability if people are confused about it.”

If they are convicted in court, insurrectionists need to be charged to the full extent of the law, says Kristofer Goldsmith, an Army combat veteran and founder of High Ground Veterans Advocacy, a nonprofit that offers former service members training in public policy engagement. “While we can have sympathy for people who are so deluded by these false beliefs, if we allow them to continue to fester without imposing a cost, then we’re just going to see events like this more often.”

In particular, this includes holding accountable former military leaders like retired Gen. Michael Flynn – a convicted felon who was granted a presidential pardon – Mr. Goldsmith says. “You can’t use your military rank and status as a veteran to whip a crowd into a frenzy to go commit insurrection.”

As charges surrounding the storming of the Capitol are brought forward for current and former service members, the laws that will serve as a guidepost when it comes to sentencing “are completely competent and give us ample tools to deal with this – which I almost never say,” Ms. Rodman says.

The legal guidance on convictions of sedition, insurrection, and treason are also quite specific when it comes to penalties involving military benefits. Normally revoking military pensions in the wake of criminal charges is off the table, for example, since a central tenet of military culture is that few service members have earned a pension without the considerable support of spouses and children. As a result, the pension is generally considered a family benefit with provisions to pass it on to a child in the case of, say, imprisonment, and legal obligations for service members to give pro rata portions to ex-spouses in the event of a divorce.

Yet this is not the case for service members convicted of taking up arms against the government, in which case they lose their retirement pay.

“I take great comfort that as a mature democratic society, we have tools in place for this, and we can apply them dispassionately: ‘You violated the law when you committed treason.’ If you use the affirmative defense (‘Yes, I did, but I had a good reason’), the courts will answer that the affirmative defense is garbage, and so you are convicted. Upon this, the following things happen,” Ms. Rodman says. “That sounds fundamentally fair to me.”