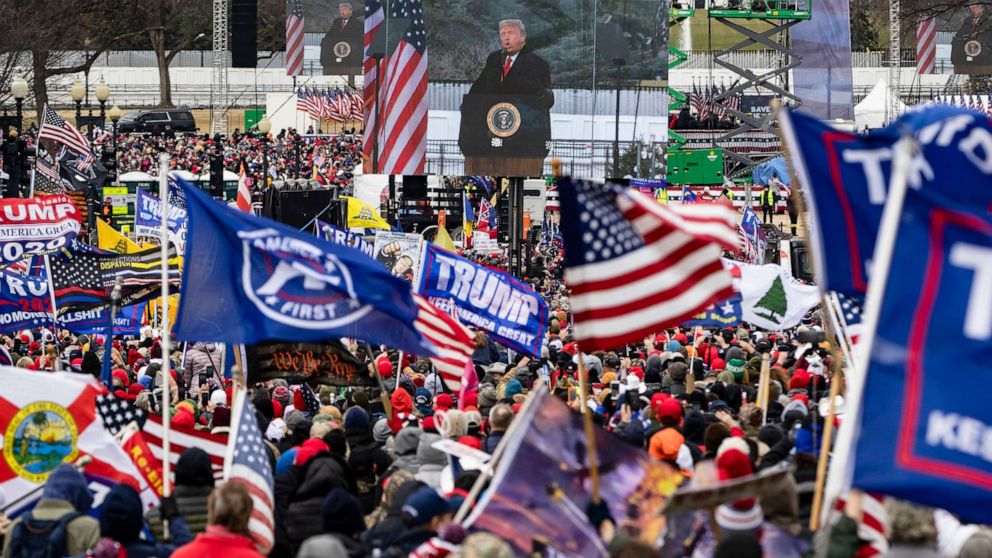 Nearly a month after a pro-Trump mob violently stormed the U.S. Capitol, a clearer picture is emerging of the individuals and groups involved as federal authorities arrest and charge people who allegedly participated in the riot.

Former President Donald Trump’s supporters — 74 million of whom voted to give him a second term in 2020 — are diverse in background and ideology and come from all corners of the United States, and those who stormed the Capitol represent just a fraction.

But to some experts, the hundreds who took part in the Capitol siege represent some of the most fervent and radical adherents of the “Make America Great Again” movement and others caught up in the frenzy of the day. They say attempts to unite those extremist elements fell apart after Charlottesville but gained renewed momentum in 2020, with racial unrest, the pandemic and most recently the unfounded controversy over the election.

Cynthia Miller-Idriss, a sociology professor at American University who studies extremism and far-right movements, said that those who stormed the Capitol are a “loose coalition” of groups from across the far-right spectrum.

“These were people who were radicalized and participated in an insurrection, it’s just that some did so in a very planned way, and I think others ended up being caught up spontaneously in mob rioting,” Miller-Idriss said.

For the experts, the most prominent force that unified hard-right adherent, militias and other Trump supporters and whipped them up into a frenzy behind the idea that the election was stolen — Trump himself.

And Trump, unlike past presidents, gave these disparate groups a national platform unlike any they’d had in modern American history with the instantaneous recognition and feedback of social media.

Trump’s false claims about election fraud and his rhetoric post-election urging his supporters to fight back is at the heart of the former president’s Senate impeachment trial, which is set to begin next week. The House of Representatives voted to impeach Trump on Jan. 13 after House Democrats filed an article of impeachment, charging him with “incitement of insurrection.”

ABC News reached out to the former president’s legal team but representatives declined to comment.

The makeup of the mob

Larry Rosenthal, chair and lead researcher of the Berkeley Center for Right-Wing Studies, said that the mob was generally made up of two groups: “right-wing populists,” whom he described as part of Trump’s most faithful “rally-goers,” and right-wing militia groups that represent two overlapping “currents” of the far-right movement: white nationalism and anti-government.

Some of these ideologies and beliefs were on display in far-right insignia scattered among the crowd, which included symbols of the Confederacy, Nazism, white supremacy and anarchy.

And some of those arrested have documented their alleged involvement on social media and some have known ties to far-right groups, or are adherents of disproven conspiracy theories.

In addition to a diverse and loose coalition of groups involved, the members of the mob were also not racially and ethnically homogenous.

Although the majority of rioters at the “Stop the Steal” rally were white, the Trump mob was “not a homogenous group of white nationalists,” Cristina Beltrán, a professor at New York University who studies race, ethnicity and American politics, said.

In fact, one of the organizers of “Stop the Steal” is far-right activist and conspiracy theorist Ali Alexander, who identifies as Arab and Black. “Blacks for Trump” signs were spotted in the crowd and some Black and Latino participants are now wanted by the FBI for their alleged involvement in the siege.

In order to understand Trump’s support, “we must think in terms of multiracial whiteness,” Beltrán writes in a Washington Post op-ed: “Multiracial whiteness reflects an understanding of whiteness as a political color and not simply a racial identity — a discriminatory worldview in which feelings of freedom and belonging are produced through the persecution and dehumanization of others.”

The motivations of the mob

After weeks of hearing false claims from Trump and his allies that the election was stolen, thousands of the former president’s most loyal followers disrupted the certification of the 2020 election results by breaching the U.S. Capitol and clashing with law enforcement in a violent siege that resulted in the death of five people.

“This insistence — and not just Trump’s, but other elected officials’ insistence on that narrative of disinformation and that false conspiracy about the election has played a huge role in mobilizing these people,” Miller-Idriss said.

In fact, chants shouted by rioters and signs spotted in the crowd closely mirrored Trump’s own words.

For instance, the rally was named “Stop the Steal,” a phrase the Trump appeared to revel in and tweeted repeatedly before his account was suspended; shortly after Trump urged supporters to march to the Capitol and “fight like hell,” rioters shouted “fight for Trump” as they violently breached law enforcement to enter the building; signs reading “take back our country” and “Trump won the legal vote” were spotted among rioters, reflecting language Trump has been using for weeks on Twitter as he repeated his false claims that the election was stolen from him.

And finally, after Trump continued to falsely claim that Vice President Mike Pence could refuse to ratify President Joe Biden’s 2020 win — but had declined to do so, chants of “Hang Mike Pence” were heard among rioters and images casting Pence as a traitor were scattered among the crowd.

“(Trump) was continuing to propagate and circulate and disseminate this information about the election in ways that posed an existential threat to them and made them feel that their democracy has been stolen,” Miller-Idriss said.

“People move from radicalization into mobilization, to really believing that they are not only empowered to act, but compelled to do so.”

The leader of the mob

According to Rosenthal, far-right groups that subscribe to white nationalist ideologies have always existed in the United States and since the second era of the Ku Klux Klan in the 1920s and 30s they have generally existed on the fringes of society, but Trump gave them a place in national politics.

“Suddenly, in 2015 at the level of presidential politics, somebody is talking their language,” he added, pointing to Trump’s anti-immigrant and racially charged rhetoric.

The “Stop the Steal” movement energized some of the same elements of the far-right movement in the U.S. that shaped the August 2017 “Unite the Right” rally in Charlottesville when hundreds of so-called alt-right groups took to the streets to violently protest the removal of Confederate monuments.

“The ‘Unite the Right’ [movement] failed. It did not create such a unified militia and the groups that put it together started falling apart among themselves … the alt-right kind of went into decline, but 2020 resurrected things,” Rosenthal said.

This past year, anti-lockdown and anti-mask demonstrations amid the COVID-19 pandemic “inflamed the anti-government” right-wing militia groups, while the Black Lives Matter protests that erupted over the summer following the police killing of George Floyd “activated the white nationalist side” of the far-right movement, Rosenthal added.

And Trump, who was outspoken on both issues, elevated these positions to the national stage, experts said.

As president, Trump repeatedly downplayed the pandemic, refused to implement a nationwide mask mandate, mostly refused to wear a mask himself and his administration frequently flouted federal safety guidelines meant to curb the crisis.

Meanwhile, during his 2020 campaign, Trump cast himself as the “law and order” candidate, slammed the Black Lives Matter movement, dismissed concerns surrounding systemic racism and police brutality and in a message to voters, he claimed that if he is not re-elected, crime and riots will overtake the suburbs.

During his final weeks in office, the coalition of far-right groups again found a common cause around the baseless cause that the election had been stolen or rigged.

The white nationalist and anti-government currents compounded in “Stop the Steal,” along with an important element of “fascist mobilizations,” Rosenthal said: “A devotion to a singular leader who can command their attention.”