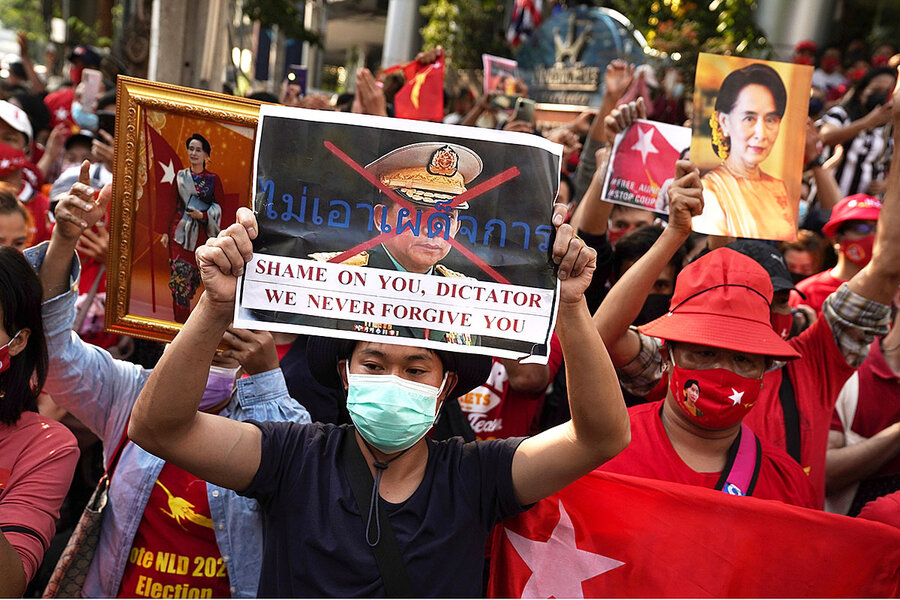 “This is another instance of something we’ve seen repeatedly in the past, namely that entrenched militaries have a very hard time giving up power,” says Thomas Carothers, a leading authority on international support for democracy at the Carnegie Endowment for International Peace in Washington. He cites Egypt and Thailand as other examples.

The U.S. can try to come to a common diplomatic stand with other democratic powers and return to the heavy sanctions it imposed in the past, “but beyond that, there are limits as to what democracy support and promotion can do,” he says.

“That doesn’t mean [the U.S.] shouldn’t do it, or that Biden is in a worse place than others in the past, or that because there was a coup your pro-democracy policy failed,” he adds. “It’s a reminder that it’s difficult supporting democracy.”

On Monday Mr. Biden issued a statement declaring the military’s seizure of power and detention of civilian leaders including Ms. Aung San Suu Kyi “a direct assault on the country’s transition to democracy and the rule of law,” and called on the international community to “come together in one voice to press the Burmese military to immediately relinquish the power they have seized.”

On Tuesday the Biden administration declared the military’s actions a coup d’etat, which by law requires a review of U.S. assistance to the country, the State Department said.

Some members of Congress joined the White House in calling for an immediate reversal of the military’s actions, and international pro-democracy and human rights groups added their voices.

“The military’s outrageous assault on democracy, following atrocities against the Rohingya, should be a clarion call for the world to act as one to finally get the military out of politics and put the interests of Myanmar’s people ahead of all other considerations,” said Brad Adams, Asia director at Human Rights Watch, referring to the Muslim minority community that has been subjected to what some term a campaign of genocide.

President Biden said the military’s actions in Myanmar prompted the U.S. to review sanctions law and other options. The United Nations Security Council was also set to meet Tuesday to discuss Myanmar.

Still, questions about effectiveness have dogged international democracy promotion for decades. And for some, those questions are only sharper at a time when U.S.-led pro-democracy initiatives face increasingly aggressive competition from the authoritarian models promoted by powers like China and Russia.

The U.S. cannot expect to rival China in Myanmar on the economic scale, some regional experts say, noting that U.S. trade with Myanmar is a small fraction of China’s, and that Chinese investment in the country far outstrips that of the U.S.

But U.S. actions like sanctions still can matter, in part because Myanmar’s military is wary of becoming fully dependent on China.

“When the country’s opening started 10 years ago, Suu Kyi attributed it in part to pressure from outside,” while others cited a desire for Western investment and access, says Walter Lohman, director of the Heritage Foundation’s Asian Studies Center in Washington.

Now some will argue, he adds, that “we cannot be too tough on Burma because it will give room for China to consolidate its relationship,” he adds, “but the truth is that Beijing already has a relationship that far outstrips Washington’s.”

In that context, he says, far better for the U.S. to act on its principles instead of on “great-power competition” and to “stand with the people aspiring to democracy and human rights.”

U.S. officials appeared to acknowledge Tuesday that the U.S. has only limited leverage, especially since the U.S. had already reimposed some sanctions in 2019 over military atrocities against the Rohingya.

But at the same time, State Department officials suggested the U.S. continues to have room to pressure a regime that is wary of China’s dominance – and mindful of strong democratic aspirations among some of its people.

The return to civilian rule in 2015 allowed Myanmar to turn away from “relying on others in the region who do not support democracy and human rights,” said one official in remarks to reporters Tuesday. “We will continue to support the people of Burma,” the official added, noting that humanitarian and democracy promotion assistance, mostly to nongovernmental organizations operating in the country, would continue.

In seizing power, the military cited the country’s constitution, which allows for the military to take control from civilian rule in an “emergency.”

The military cited what it said were fraudulent parliamentary elections in November – elections that overwhelmingly repudiated military-backed candidates in favor of those from Ms. Aung San Suu Kyi’s party. The new parliament was to have opened Monday.

The turn of events in Myanmar is more a reflection of the tenacity of military rule than it is of rising authoritarianism globally, experts like Carnegie’s Mr. Carothers say.

“True, China’s influence is not pro-democratic, but I wouldn’t describe Myanmar’s failures as an example of the rise of an authoritarian model in the world,” he says. “A military coup is not the Chinese model. They’re following their own Burmese military model.”

Short of a military intervention, which Mr. Carothers says is certainly not going to happen, Mr. Biden may lack the power to effect a reversal of the coup. But that does not mean the president’s “aspirational statements” or impending coercive actions like renewed sanctions serve no purpose, he adds.

The military may have cut internet access in the country, but the people of Myanmar still know of outside support, some experts say, even as statements and measures taken by the U.S. and other pro-democracy nations send a signal beyond Myanmar’s borders.

“You may not get results overnight, but I think we’ve learned that in the long run you get more by taking a strong stand on your principles and values than by disregarding them,” says Mr. Lohman at Heritage. “There’s a sort of demonstration effect that is powerful, both in the country you’re targeting and in other struggling democracies in the region and around the world.”