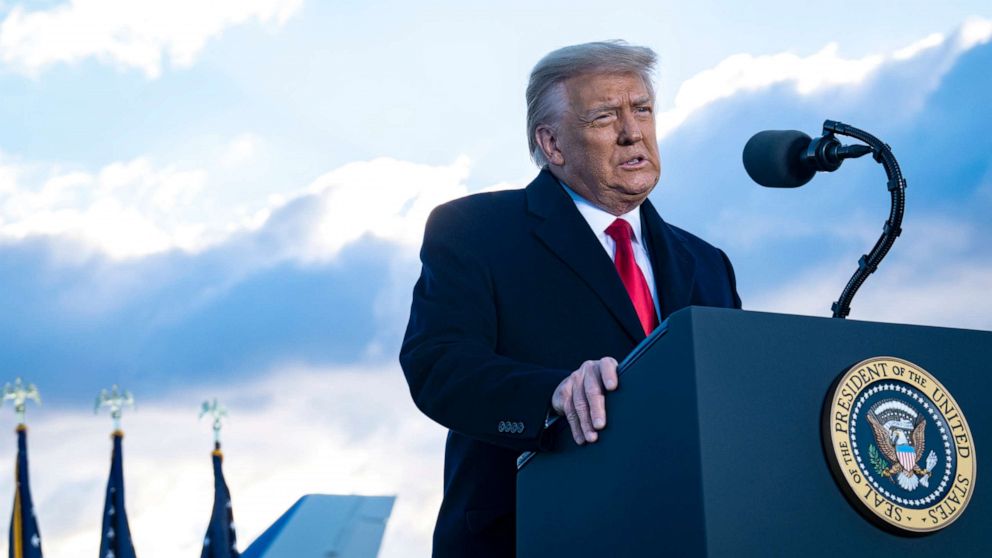 The grand debate in Washington now is about the power of words — what they mean when coming from former President Donald Trump and those aligned with him, as well as those in his party aligned against him.

The words submitted by Trump’s impeachment defense team themselves matter even before the Senate trial begins next week. The former president’s team is asserting that there was nothing improper about his plea for a state election official to “find” votes for him, and won’t even concede the falsity of him telling rally-goers Jan. 6 that “we won this election, and we won it by a landslide.”

“The extent (the impeachment document) alleges his opinion is factually in error, the 45th President denies this allegation,” Trump’s legal team wrote in their official filing.

Wednesday is a potentially momentous day for the Republican Party. The day after House Minority Leader Kevin McCarthy’s long-awaited conversation with Rep. Marjorie Taylor Greene, Rep. Liz Cheney could face a reckoning inside her conference over her impeachment vote.

The impending trial guarantees refreshed memories of the horrors that took place at the Capitol less than a month ago. Any thought the trial would turn on narrow constitutional questions is effectively out, given Trump’s strategy of defiance.

It’s telling that Senate Minority Leader Mitch McConnell has had more to say about the House GOP drama than McCarthy, his House counterpart. McConnell recognizes the stakes not just of Trump and the likes of Greene, but of the words that have the ability to both empower and endanger.

According to Biden’s executive actions, as head of the DHS, Mayorkas will now steer a task force focused on migrant family reunification, overseeing the development of a strategy to address irregular migration across the southern border and reviewing the scope of Trump’s immigration policies.

“There’s a lot of talk, with good reason, about the number of executive orders that I have signed. I’m not making new law, I’m eliminating bad policy,” Biden said on Tuesday.

While the first part of that statement seemed to offer a defense of his near-daily use of executive orders to roll back Trump policies, the rest of Biden’s comment could be interpreted as a precursor to possible questions about whether Tuesday’s executive orders currently do enough to begin clearing up the nation’s clouded immigration system.

In a potential preview of the kind of feedback the White House could face in the coming days, Human Rights Watch associate director of the U.S. program, Clara Long, told ABC News on Tuesday that while she was supportive of “the way the Biden administration has framed up its intention to restore asylum at the border,” she was also “a bit disappointed that it hasn’t gone further” by having left in place problematic policies including summary expulsions under public health authority.

It’s been a month since the deadly insurrection at the U.S. Capitol and one of the leaders of the Republicans’ last-ditch effort to help Trump subvert the election is cashing in on his loyalty to the former president.

Missouri Sen. Josh Hawley — the first senator to publicly announce plans to challenge Biden’s victory in Congress — raked in nearly $1 million in January, his best monthly haul since his first election to the Senate in 2018, according to a new memo from his campaign.

“It is crystal clear that a strong majority of Missouri voters and donors stand firmly with Senator Hawley, in spite of the continued false attacks coming from the radical left,” the memo from Hawley’s pollster, Wes Anderson, concluded. His early fundraising success is a sharp counterpoint to the backlash he received from three high-profile donors in Missouri who disavowed him and the more than two dozen prominent companies who pulled back their corporate PAC giving to political campaigns, some specifically targeting the GOP lawmakers who, like Hawley, objected to the election results in Congress.

On the eve of impeachment week, the surge in grassroots support offers a glimpse into why the Republican refuses to show contrition for his actions leading up to Jan. 6, continues to resist calls for his resignation, and will likely reinforce his penchant to stay closely aligned to Trump. It’s also an early sign, but a strong one, that the gap within the GOP between the ever-loyal Trump faction and the establishment wing looking to move on from the former president could be widening.