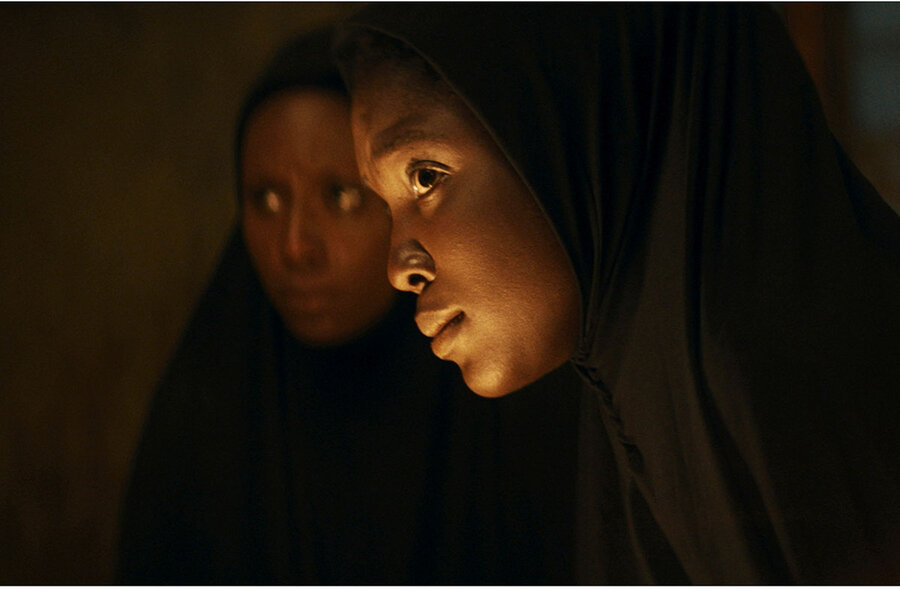 Painted faces, big smiles, and a frenzied air announce a marriage in a rural West African village. Women doll the bride up in white cloth embroidered in greens and reds, the traditional wear of the Fulani, a large nomadic group that’s spread across the region. Over the bride’s face, a pink veil falls demurely. As she makes her way to the wedding ground, a crowd surrounds her, dancing to the beat of hand-held drums while women ululate.

But the joyous celebration soon morphs into a slaughter as terrorists attack. Women fall from bullets and men are hacked. Over her mother’s corpse, a baby cries, looking into the camera as it pans away: Hers is one small story in a sea of tragedies. The bride and other women are carted away, and their life as slaves and fighters’ brides begins.

Nigeria’s new film “The Milkmaid” takes viewers on an intimate journey into lives they rarely see: people who are at the receiving end of a brutal Islamist insurgency that has gripped northeast Nigeria for over a decade, and spread to several countries in the Sahel region.

Newspaper headlines announcing casualties have become so frequent that reactions have turned lukewarm. Outside the northeast, where Boko Haram seeks to carve out a caliphate, it’s easy to forget that behind those numbers are real lives. But “The Milkmaid” reminds, and it is a mind-clawing, well-shot reminder – for those who can see it, that is.

“The Milkmaid” won the heart of Nigeria’s independent Oscars selection committee, and is the country’s official submission for the international film category this year. (Nigeria submitted its first-ever Academy Awards candidate last year, but the film was controversially disqualified for having too much English dialogue.) But relatively few people have seen “The Milkmaid” in Nigeria, or even know it exists, thanks to government censorship.

Authorities said the movie is too provocative, according to director Desmond Ovbiagele, and accused it of misrepresenting Islam. He was forced to strip several scenes, including one that shows a terrorist as painfully ordinary, fighting sexual urges as he recites his prayers and reads the Quran. A scene where extremists plan to attack a school – mirroring real-life attacks by Boko Haram as recently as December – was also cut. In the end, Mr. Ovbiagele shaved some 30 minutes from the film.

It wasn’t a first. Many film fans and creators, like Mr. Ovbiagele, complain that Nigerian’s film board imposes heavily moralized, arbitrary limits on art, threatening homegrown creativity. But Africa’s most populous country has long wrestled with tensions over religion, ethnicity, and social mores – particularly between its largely Muslim north and Christian south – and censors sometimes cite the risk of violence.

Mr. Ovbiagele, a longtime banker who left finance for film about a decade ago, says he would rather not show the cut in Nigeria. He has turned to other African markets, like Zimbabwe and Cameroon.

“What’s out there is not authentic. It’s not my vision; it’s the board’s vision,” he says. “I am saddened on behalf of ourselves and for the people whose lives we are trying to portray, because what [censors] want us to show does not represent their situation, and the whole point was to show them as human beings – both the perpetrators and especially the victims.”

Set in an unnamed part of West Africa, “The Milkmaid” follows fiery Aisha and her sister Zainab, whose cowherding life comes to an end when terrorists kidnap and force them into marriage. The sisters are separated, but Aisha continues to search for Zainab – only to find that she has fully joined the sect as a commander.

Terrorism is rarely examined in Nollywood, the Nigerian film industry known for producing more films than Hollywood. Nollywood has bloomed in the past decade, but favors slapstick comedies and glamorous movies that showcase the lives of Nigeria’s rich – big homes, big parties, flashy cars – over gritty, hard-hitting narratives that poke holes in that image.

The National Film and Video Censors Board is charged with classifying and regulating films. But critics accuse the government agency of employing a stricter approach to local films than to imported ones, and say nonconforming filmmakers must look elsewhere to launch.

“I know filmmakers who are working on the fringes of Nollywood and are making films that will never show in Nigeria,” says Nigerian film critic Oris Aigbokhaevbolo. By favoring films that make Nigeria look good, the board operates as an “incredibly highhanded” image-making organization, he adds.

Art about terrorism, which the government has struggled to contain, won’t fly. Neither do many projects attempting to push conversation around challenging social topics, from conflict and sexuality to poverty. For months, the film board delayed the release of the 2013 movie “Half of a Yellow Sun” about Nigeria’s Biafran War, which killed an estimated 2 million from the Igbo tribe. And in 2020 the makers of “Ìfé,” a film about female lovers, were forced to premiere the film online, as homosexuality can bring a 14-year prison sentence.

“The way the Censors Board works is, ‘see no evil’ means there’s no evil: If no one can see it, that means it doesn’t exist,” Mr. Aigbokhaevbolo says. The consequence, he warns, is the stagnation of art and the “shrinking of spaces for movies that will promote intellectual and cultural conversations.”

The Censors Board did not respond to request for comment on “The Milkmaid.” In past cases, however, it has defended its decisions by citing the need to avoid a crisis in a deeply religious and divided country where art has incited violence.

In 2002, riots broke out after a journalist’s lighthearted jab at some Muslims’ opposition to hosting the 2002 Miss World Pageant was taken as blasphemous. Two hundred people died. Sixteen people died in 2006 riots over cartoons of the Prophet Muhammad published thousands of miles away, in Denmark. More recently, Nigerians have protested against similar cartoons in the French magazine Charlie Hebdo.

“Anything that can cause an uproar should not be ventured into because we know where we are as a society,” Alonge Oyadiran, the board’s director of film censorship and classification, said in a 2020 interview with Nigerian filmmaker Niyi Akinmolayan. “We have a culture, we have our norms, and there are certain values we have to follow. I wouldn’t say because I want my film to sell, I will make a film where people are kissing on the street. This doesn’t happen in Nigeria.”

A middle ground has to be found, filmmakers and critics say, calling for the board to take a more collaborative approach. One thing Mr. Aigbokhaevbolo suggests is “a sophisticated rating system that has [expanded] categories. What it would look like is the board saying this film can be shown, but this is what you are seeing”: material that may be seen as blasphemous, for example. The seven classifications in use today are based on viewers’ age.

As for Mr. Ovbiagele, he hopes the board will rethink its decision on “The Milkmaid.”

“Right now, they [victims] are sort of detached from what we are experiencing as a country. We are going about our daily lives and they are just there sitting in some camp, doing nothing. It’ll be a shame if Nigerians can’t see the film and be able to respond to it.”