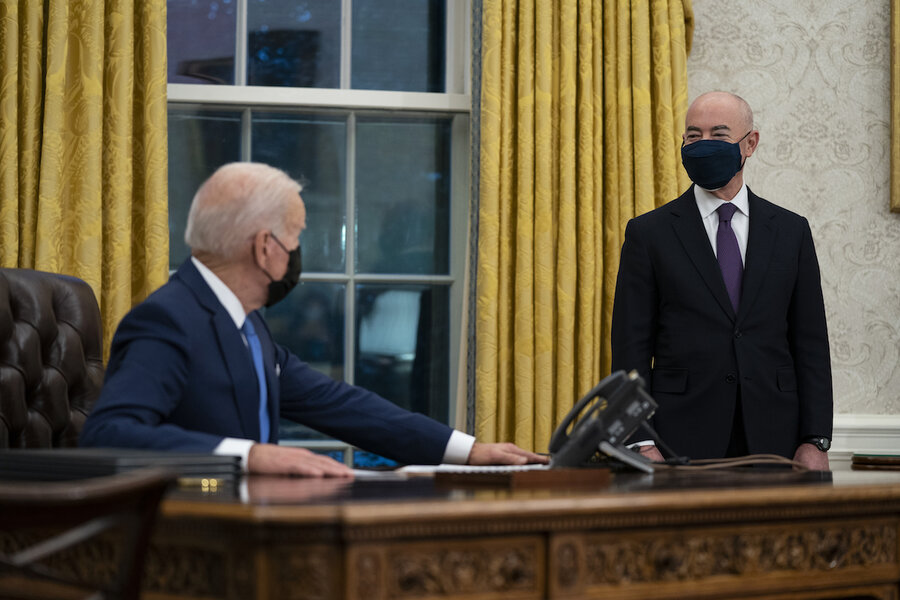 United States President Joe Biden signed a second spate of orders to undo his predecessor’s immigration policies, demonstrating the powers of the White House – and its limitations without support from Congress.

His orders on family separation, border security, and legal immigration bring to nine the number of executive actions on immigration during his first two weeks in office.

With proposed legislation to give legal status and a path to citizenship to all of the estimated 11 million people in the country who don’t have it, Mr. Biden has quickly taken aim at many of former President Donald Trump’s sweeping changes to deter immigration, both legal and illegal, and established a vision that is likely to far outlast his tenure if he’s able to muster enough support in a deeply divided Congress.

Mr. Biden rescinded some Trump actions and laid a foundation for more far-reaching repeals depending on the outcome of policy reviews over the next few months.

Alejandro Mayorkas, who was sworn in as Homeland Security secretary after his nomination was confirmed Tuesday by the Senate, will lead a task force on family separation, focused largely on reuniting parents and children who remain apart. It is unclear exactly how many, but about 5,500 children have been identified in court documents as having been separated during Mr. Trump’s presidency, including about 600 whose parents have yet to be found by a court-appointed committee.

“We’re going to work to undo the moral and national shame of the previous administration,” Mr. Biden said.

The review will address the possibility of legal status in the U.S. for separated families and providing mental health services.

The American Civil Liberties Union, which sued to reunite families, has asked the administration for legal status in the U.S. for all of the thousands of families that have been separated, as well as financial compensation for those families and attorneys at the government’s expense.

A review of border security will include a policy that makes asylum-seekers wait in Mexican border cities for hearings in U.S. immigration court. It is a step toward fulfilling a campaign pledge to end the “Remain in Mexico” policy, known officially as Migrant Protection Protocols, which enrolled nearly 70,000 asylum-seekers since it began in January 2019. Mr. Biden asked for “a phased strategy for the safe and orderly entry into the United States” of those already enrolled who are waiting in Mexico for a judge to decide their cases.

Mr. Biden ended a policy that held asylum-seekers in Customs and Border Protection custody with virtually no access to attorneys while their claims were quickly decided. He ordered reviews of a nationwide expansion of fast-track deportation authority and of agreements with Guatemala, El Salvador, and Honduras for the U.S. to reject asylum applicants and instead send them to those Central American countries with an opportunity to seek protection there.

Mr. Biden didn’t address a freeze on many temporary work visas and green cards while the economy recovers from a pandemic, as some expected.

“That’s a pretty big gap for them not to take action on those visa bans because the impact is so dramatic and significant,” said Greg Chen, director of government relations for the American Immigration Lawyers Association.

While immediate changes were limited, the impact of executive orders that Mr. Trump issued his first week in office didn’t start to become apparent until a month later when Homeland Security issued detailed enforcement priorities. Those orders laid a foundation for many other of his administration’s hundreds of immigration moves that followed.

Many changes will have to come from agencies like Homeland Security, not the White House, such as rescinding the public-charge rule, Mr. Chen said.

The announcements come as Biden aides warn that Mr. Trump’s border policies that put asylum increasingly out of reach may take months to unwind – a position that has caused grumbling among some pro-immigration advocates.

Roberta Jacobson, a top Biden aide on border issues, asked Spanish-language media on Friday to discourage audiences from coming to the U.S. border. “It is not the moment,” she said in Spanish, adding that the journey was “very dangerous, and we are in the middle of creating a new system.”

White House spokeswoman Jen Psaki reinforced that message from the White House podium on Tuesday, saying it “remains a dangerous trip” and, “This is not the time to come to the United States.”

The orders demonstrate that, just as Mr. Trump remade immigration policies from the White House, Mr. Biden can undo them with the stroke of a pen – some more easily than others. More lasting changes would have to pass Congress, a daunting job that Mr. Trump and his predecessors Barack Obama and George W. Bush failed to achieve.

In an echo of failed legislative pushes in 2007 and 2013, familiar lines of division have formed with overheated rhetoric. Stephen Miller, a top architect of Mr. Trump’s policies, said Sunday on Fox News Channel that Mr. Biden’s actions amount to the “end of all immigration enforcement in the United States of America.”

Pro-immigration groups largely applauded Mr. Biden’s latest moves, though they were more muted than the almost-giddy reception to the president’s first-day actions.

“The positive steps the administration is taking must be the beginning, not an end unto themselves,” Ali Noorani, president of the National Immigration Forum, said Tuesday. “Congress should build on these first steps to find permanent solutions to improve our immigration system.”