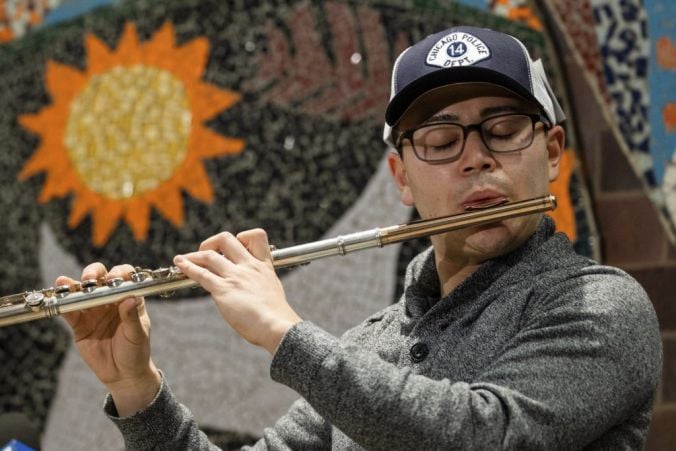 Anyone who has left so much as a hat on a Chicago Transit Authority train knows that whatever leaves the station without its owner is often gone forever.

Donald Rabin is once again holding — and playing — the flute left to him by his grandmother that he forgot on a train seat when he hopped off last week in Logan Square.

“I’m just thankful that I have the flute in my hand, that I can make music again and I can make people smile,” said Mr Rabin, 23, from Boston.

He was riding a Blue Line train from O’Hare International Airport during a layover before his return to Berklee College of Music in Boston, but when he got off, he realised he had left his flute behind.

He said he rode the train for hours in hopes of finding the flute, and when he came up empty he reported the missing instrument to police and took to social media to tell people what happened.

According to the Chicago Tribune, a CNN reporter told Mr Rabin as he was about to fly out of Chicago that there was a comment on Facebook about the flute showing up in a pawn shop, that a homeless man had found it and used it as collateral for a 550-dollar loan.

The pawnshop owner, Gabe Cocanate, was holding on to the flute, trying to determine if it was as valuable as it looked, when he and his wife saw the story of the missing flute on the news.

So when the homeless man returned to the shop, “I go, ‘Listen man, it’s been all over the news. It’s not your flute’,” Mr Coconate told the Chicago Sun-Times.

Police picked up the flute and contacted Mr Rabin, who flew back to Chicago this week, retrieved it and treated officers to a brief concert.

He knew the odds of seeing something so valuable ever again, but said: “For some reason, I knew in my heart and soul it would be found. I knew my grandmother would never leave me.”