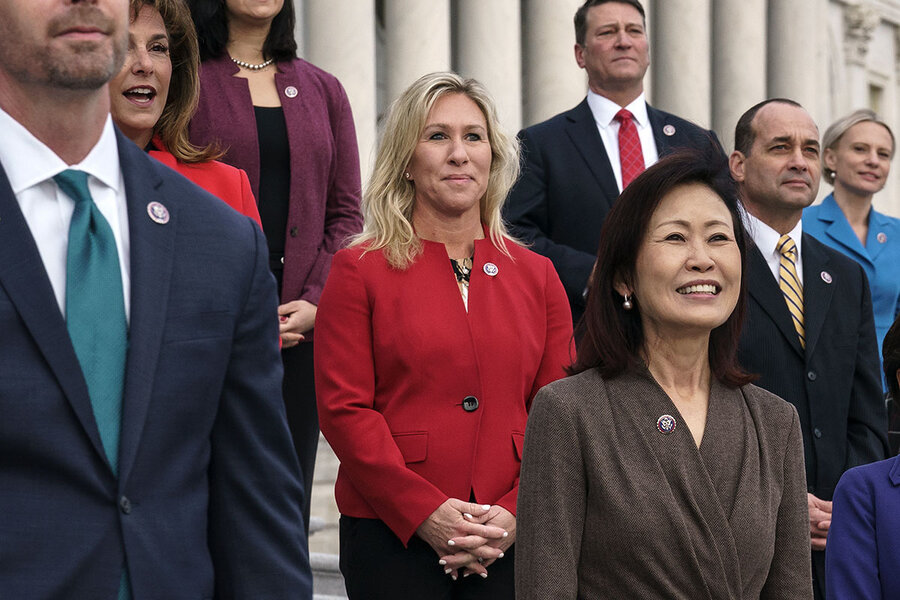 Rep. Marjorie Taylor Greene of Georgia is a huge problem for Republican lawmakers. Huuuuge. And some GOP leaders are handling the challenge more adroitly than others.

Rep. Greene is a rookie member of Congress with an affinity for conspiracy theories such as QAnon. Prior to her election she promoted wild social media claims that mass shootings in Las Vegas and Florida were “false flag” operations staged by gun control supporters. She’s endorsed posts calling for the assassination of House Speaker Nancy Pelosi.

In many ways Rep. Greene, for elected Republicans, is a subset of the larger former President Donald Trump problem. Who and what defines the GOP?

Mr. Trump – and Rep. Greene – are focused on exciting the party base, raising cash, and TV coverage. But Sen. McConnell, and House Minority Leader Kevin McCarthy, have different priorities.

They are, or should be, looking ahead to the 2022 mid-term elections, when both the Senate and House could flip back to Republican control. For that to happen Republicans need to do well in purple states – and in suburbs, where Trumpian lies and bombast alienate educated voters otherwise amenable to the GOP.

That’s why Sen. McConnell has little patience for Rep. Greene. Sen. McConnell is shrewd and wants to wield the Majority gavel again. The Trump base isn’t big enough to put him there.

House Minority Leader McCarthy? The jury’s still out. He tried to mollify Democrats by offering to kick Rep. Greene off one of her two committees. Democrats want her off both panels.

To be fair, the House GOP conference is difficult to manage. Just ask former Speaker John Boehner, Republican of Ohio, who quit in 2015, tired of dealing with squabbling factions.

Today, somewhere, Mr. Boehner is reading the news and smiling.