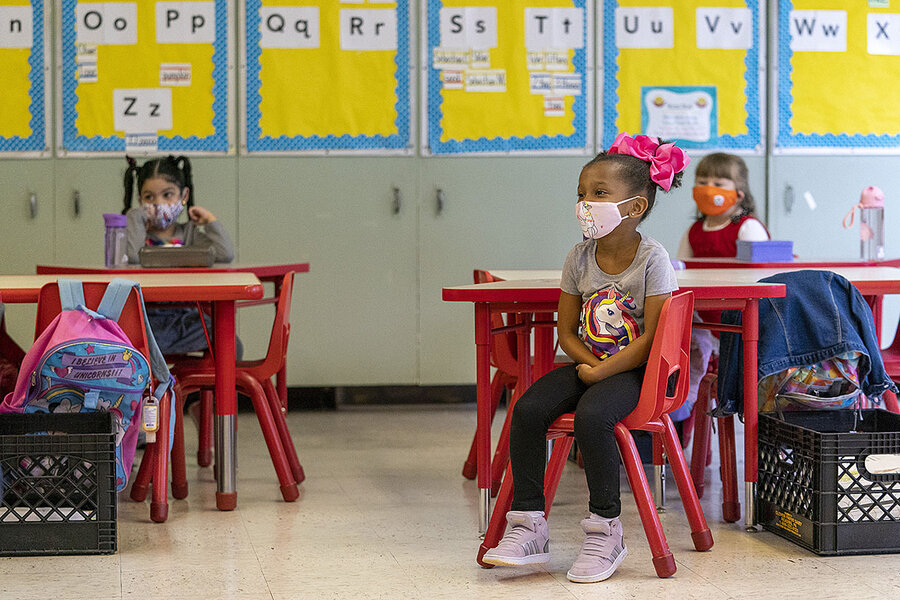 Two weeks into his term, President Joe Biden faces sky-high expectations in the battle against COVID-19.

He has brought in respected public health and logistics experts, stepped up the nationwide vaccination program, and put his $1.9 trillion relief package on a fast track to passage in Congress – aimed, too, at addressing the economic and educational hardships that have flowed from the pandemic.

In a blizzard of executive actions, President Biden has also moved urgently on immigration, climate change, and racial justice. But if Mr. Biden fails to get the pandemic under control, allowing for some semblance of a return to normal life in the United States, nothing else matters, analysts say.

“His presidency, at least for the first year, depends almost entirely on how he does on COVID,” says Paul Light, a professor of public service at New York University.

Part of Mr. Biden’s task is to manage public expectations. His initial goal of 100 million inoculations in 100 days might have a nice ring to it, but some public health experts called it too slow – and to “vaccine trackers,” that pace was already nearly being met by the end of the Trump administration. Six days after inauguration, in off-the-cuff remarks, Mr. Biden suggested going to 1.5 million shots a day. Aides quickly pointed out that that was more aspirational than a new, official goal.

A major challenge for the Biden administration is to square its public messaging with what people are seeing in their communities.

“Biden is talking about 100 million vaccinations in 100 days. Excellent,” says Marsha Vanderford, a former communications official at the World Health Organization and the Centers for Disease Control and Prevention (CDC). “But how does that unroll in conjunction with messages people are hearing that the vaccine clinics have been canceled in their county health department, because there’s no vaccine?”

That’s the kind of disconnect Mr. Biden’s 200-page national strategy on COVID-19 response is meant to ameliorate. Goal No. 1, the plan says, is to restore public trust. In his first two days in office, Mr. Biden signed 10 executive orders addressing the pandemic, including measures to accelerate vaccinations, ramp up testing, aid states with funds and coordination, and safely reopen schools.

Mr. Biden’s personnel choices are also key. Unlike former President Donald Trump, whose White House was marked by high turnover and dysfunction, Mr. Biden has brought in a team of seasoned government hands that he has long known and trusted. Top among them are chief of staff Ron Klain, who spearheaded the White House response to Ebola in 2014, and Jeff Zients, the COVID-19 response coordinator. It was Mr. Zients who led the “tech surge” that fixed HealthCare.gov after its disastrous rollout in 2013.

“By putting in people who are fully qualified to hit the ground running, President Biden can concentrate on that which he has promised the American people, which is to take care of the COVID crisis first, then deal with the economy and racial inequities and climate,” says epidemiologist Kenneth Bernard, who ran the White House office on global health threats under both Presidents Bill Clinton and George W. Bush.

Mr. Biden, in fact, may owe his election to the pandemic. A 27-page report by Mr. Trump’s chief pollster found that in 10 key states, the coronavirus was the top voting issue, and among those voters, Mr. Biden won by an almost 3-to-1 margin. Mr. Biden also had a clear edge over Mr. Trump “on being seen as honest & trustworthy,” the pollster, Tony Fabrizio, wrote.

Mr. Biden begins his presidency in a bit of a honeymoon, with job approval averaging 55% in major polls and disapproval at 35%, according to Real Clear Politics. In Mr. Trump’s four years in office, his job approval never averaged above 50%.

But the new president can’t rest easy, and he seems to know that. “You have my word,” Mr. Biden declared the week before inauguration, in laying out his COVID-19 plan. “We will manage the hell out of this operation.”

On Tuesday, Mr. Zients announced a plan to ship doses of vaccine directly to pharmacies beginning next week. That’s on top of the administration initiative to send 10.5 million doses a week for the next three weeks to state governments. Since taking office, the Biden administration has boosted the number of doses being sent to the states by 20%.

Mr. Biden “has made COVID-19 the centerpiece of his communication,” says Ms. Vanderford, a consultant on global health communications. “He ties everything else into it – the economic picture, support for workers. And his belief in science is front and center.”

In one sense, after the chaotic Trump years, the bar for perceived success by Mr. Biden is low. All he has to do, it may seem, is listen to his experts, stick to the science, and be straight with the public. But at the same time, Mr. Biden – in promising to solve the biggest global health crisis in more than a century – faces a high bar for success. And in these hyperpartisan times, politics are likely to color public assessments. With Mr. Trump’s second impeachment trial set to begin on Feb. 9, partisanship will ignite anew.

Mr. Biden, a centrist Democrat, is also walking a tightrope in his promises to unite the country – reaching out to Republicans, but also needing progressive Democrats to stick with him. After a two-hour Oval Office meeting Monday with moderate Republican senators, and hearing out their plan for a smaller, $618 billion COVID-19 relief plan, he urged Senate Democrats in a private call Tuesday to go big on pandemic relief, and pass his $1.9 trillion package via a legislative procedure that requires just a simple majority. Democrats control the 50-50 Senate only because Vice President Kamala Harris can break tie votes.

The relief package will be the first major legislative vote of the Biden era, and the new president is playing hardball. But Mr. Biden knows, based on history, that his time may be limited for doing big things. And with variants of the virus emerging in the U.S., there’s added urgency to step up vaccination.

The Biden team is doing all the right things on COVID-19, albeit “six months late, but they had no choice,” says Dr. Bernard. He calls the Trump administration’s vaccine development program, Operation Warp Speed, “brilliant.”

“Advance procurement of a vaccine before it was even proven to be effective was absolutely the right way to go,” Dr. Bernard says. But “in other respects, the Trump response was very bad, in terms of rolling out the vaccination plans at the local level.”

Under the Trump administration, “there was distrust of science and demeaning of people at the CDC and the FDA [Food and Drug Administration], and unnecessary political criticism of Dr. Fauci and others,” says Dr. Curran, dean of the Rollins School of Public Health at Emory University in Atlanta. “But that’s over with now. It’s time to move on.”