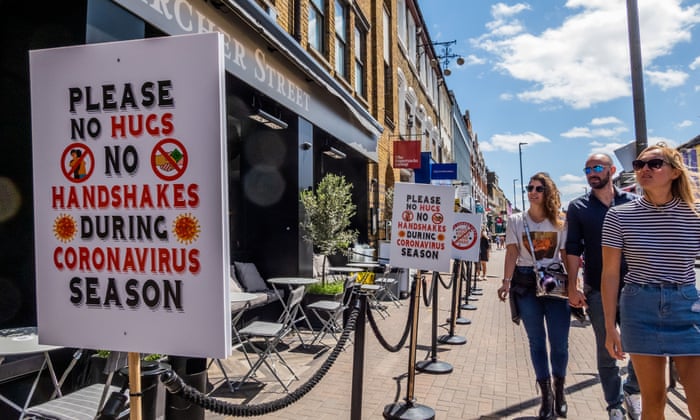 The UK’s coronavirus vaccination programme passed a milestone this week, with 10m first doses administered. The rate of jabs is averaging more than 400,000 a day and the government is on course to meet its target of giving first doses to the 15 million most vulnerable people by mid-February.

But scientists say that unprecedented vaccine coverage and staged unlocking at the right time are crucial to avoid a devastating resurgence. So, season by season, how might 2021 look?

The urgent task over the winter is to vaccinate the 15 million people in the top four priority groups, drawn up by the Joint Committee on Vaccination and Immunisation (JCVI): care home residents, frontline health and social care workers, the clinically extremely vulnerable and the over-70s.

The UK has decided to delay booster shots for up to three months, but the JCVI is monitoring Public Health England (PHE) data weekly: if there are signs protection is waning from first shots, boosters could be given sooner. Most deaths, 88%, occur in these top four groups, so vaccination should reduce fatalities substantially. Because it takes three weeks for immunity to build after a shot, and because of the lag between people becoming infected and dying, the impact of jabs on deaths will take time to show in official figures – it should be visible from the end of February.

“We will be nowhere near seeing the full effect on the day we vaccinate the last person in that group. It will become more and more apparent in the weeks after,” says Mark Woolhouse, professor of infectious disease epidemiology at Edinburgh University.

But there are pitfalls to watch out for, he says. Amid the rush to vaccinate, there is a danger substantial numbers of vulnerable people miss out. When lockdown lifts, the virus will still be around, putting those people in danger of hospitalisation and death. “I am very concerned that in the rush to get as many people vaccinated as quickly as possible we leave people behind, and the people that get left behind will tend to be from minority ethnic groups and deprived areas and they tend to be most at risk from this disease,” Woolhouse says. “We need to be really ambitious, to break records with vaccine coverage, and not move on before we finish the job.”

The problem arises when imperfect vaccines meet incomplete coverage. Recent data from Israel suggest a single shot of the Pfizer/BioNTech jab provides an impressive 90% protection after three weeks. Even if vaccine uptake is staggeringly high, say 90%, and this protection level is real and sustained, about 19% will remain unprotected in the most vulnerable top four groups, nearly 3 million people.

“There’s a good chunk of vulnerable people who are relatively protected right now because people aren’t mixing. But even if you’ve protected 80-90% of the elderly with the vaccine, you potentially lose all that benefit if you completely relax restrictions,” says Michael Tildesley, who is modelling the outbreak at Warwick University. “You need to get vaccinations into more people.” This builds up more widespread protection in the community and brings transmission rates down.

How good the vaccines are at preventing the spread of the virus is not yet clear. Preliminary results from Oxford/AstraZeneca trials suggest one shot of their vaccine cuts transmission by two-thirds, but more real-world data is needed. If vaccines do drive down transmission, new infections should fall first in care homes and hospitals. But until vaccines reach younger people, the impact on community cases may not be substantial. 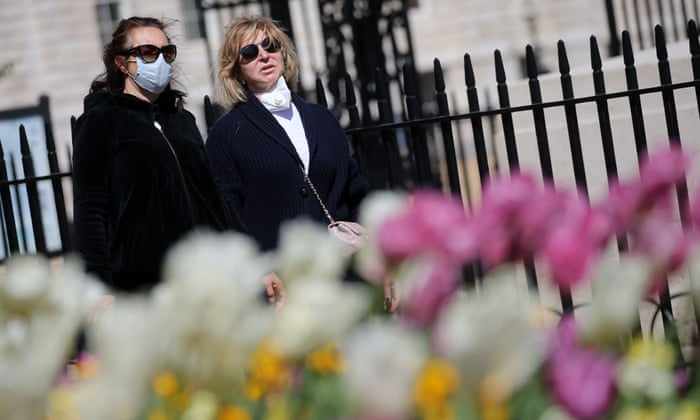 If the winter is about vaccinating to prevent deaths, the spring is largely about preventing hospital admissions. While Covid deaths are overwhelmingly concentrated in the over-70s, the middle-aged occupy more hospital intensive care unit beds.

In March and April, the vaccine rollout will target groups five to nine in the JCVI priority list – all over-50s and those aged 16 to 64 with underlying health problems that put them at high risk from Covid. This is a further 17 million people, who when added to those in the top four priority groups, account for 99% of Covid deaths.

“Currently there are large numbers of very ill people in hospital who would have fallen into our priority groups five to nine,” says Anthony Harnden, a GP, professor of primary care at Oxford and deputy chair of the JCVI. Fluctuations in vaccine supply and the need to administer second shots make it hard to predict when these groups will be covered, but the Cabinet Office suggests by May.

“Vaccinating these groups will have a much smaller effect on death rates because very few of them die from this disease, but it should have a significant impact on the hospitalisation rate,” says Woolhouse. Again, he emphasises the need for high vaccine coverage to avoid many vulnerable people being left unprotected.

If schools reopen as planned, scientists will be keenly watching infection rates and the reproduction number, R. The increased mixing that comes with schools reopening will push R up as much as 0.5; the question will be whether enough people have received first doses to reduce community transmission and counteract the rise.

How soon can the rest of society reopen? Matt Keeling, professor of populations and disease at the University of Warwick, fears even partial easing of restrictions before May is a bad idea. Harnden also calls for caution. “I would urge patience until at least the spring time or until national restrictions are lifted,” he says. “Vaccination will not offer complete protection against disease and after vaccination you could still transmit infection to others who may be vulnerable. The more the virus is transmitted, the more the virus continues to circulate and the more likely it is to mutate and be one step ahead of us.”

When reopening comes, it must be gradual, staged and monitored, says Tildesley. The maths suggests that vaccines alone may not control the spread of the virus, at least not in the short term. The R number for the virus in the UK last February was about 3. The new variant is about 50% more transmissible, so potentially driving R above 4. If the vaccine cuts transmission by two-thirds, R may drop to around 1.5, meaning familiar protective measures, alongside mass testing and a more effective test-and-trace system, may be needed if we want to contain the epidemic.

Coronavirus variants: what you need to know – video explainer

In the summer the vaccination programme will push on to cover the 21 million other adults in the UK population, an effort that should get a boost from the arrival of the Moderna vaccine, approved but not yet supplied. “Even when we have vaccinated all the over-50s, that will still mean that over half the population will be unvaccinated and a very high proportion of these will remain susceptible to infection and disease,” says Penny Ward, visiting professor in pharmaceutical medicine at King’s College London.

While better weather will help, the danger in the summer is that vaccine uptake drops off as people in their 20s and 30s feel less at risk from Covid. But high coverage in these groups is essential to keep pushing transmission down, says Tildesley. “This is where the government can really help with very clear messaging and I would start that now. They need to make it very clear that it’s not about you, it’s about protecting everybody else. If we don’t get really high levels of protection across the population, we could be stuck with a level of controls for a really long time.

“My hope is we can get to, say, 40m doses by early summer and see strong evidence of it reducing deaths and hospitalisations. Hopefully as we move into May and June we should be in a position for significant relaxation.”

Achieving high coverage in younger people will again mean making extraordinary efforts to reach those who are vaccine hesitant, have poor access to jabs, or miss out on shots for other reasons. Prof Kamlesh Khunti, from the University of Leicester, who sits on the government advisory group Sage, says that beyond the need to protect others, the shots should reduce long Covid, which affects all age groups. “About 10% of those infected may end up with long Covid,” he says. “There will be more people with long Covid than people who have been hospitalised and died put together.” 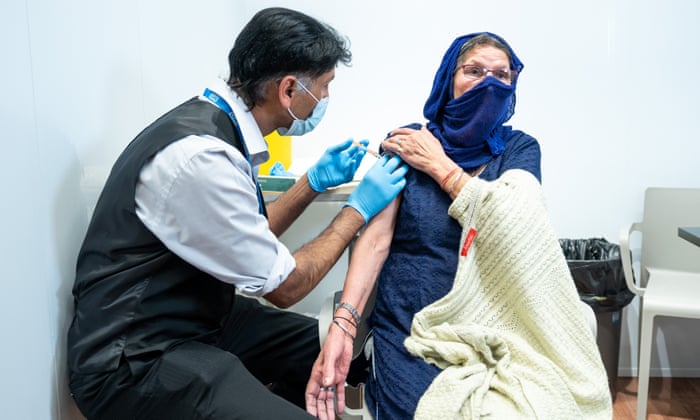 Autumn will be time to prepare for the coming winter. The vaccine rollout in the UK and globally will have put pressure on the virus to evolve further, and more transmissible variants, which may be less susceptible to vaccines, may be circulating. Later this year, manufacturers are expected to release updated vaccines tailored for the most dominant variants.

From here on, coronavirus vaccination may become as routine as flu shots, with annual rollouts preventing many deaths but by no means all. “It is possible we will have an annual immunisation for coronavirus which is tailored to the predominantly circulating strains at the time, and that may happen as early as this autumn,” says Harnden.

Another question for the JCVI is whether to vaccinate children. The Pfizer/BioNTech jab is approved for age 16 and above, and the Oxford/AstraZeneca jab for 18 and older, but trials in younger teenagers are under way.

“If the policy is to try to reach the herd immunity threshold, it will certainly be extremely difficult to do that without vaccinating older children,” says Woolhouse. He adds that other measures will be crucial in the meantime. “Mass testing could help us enormously between now and September, and we’ll need to focus on making contact safe and activities safe.”