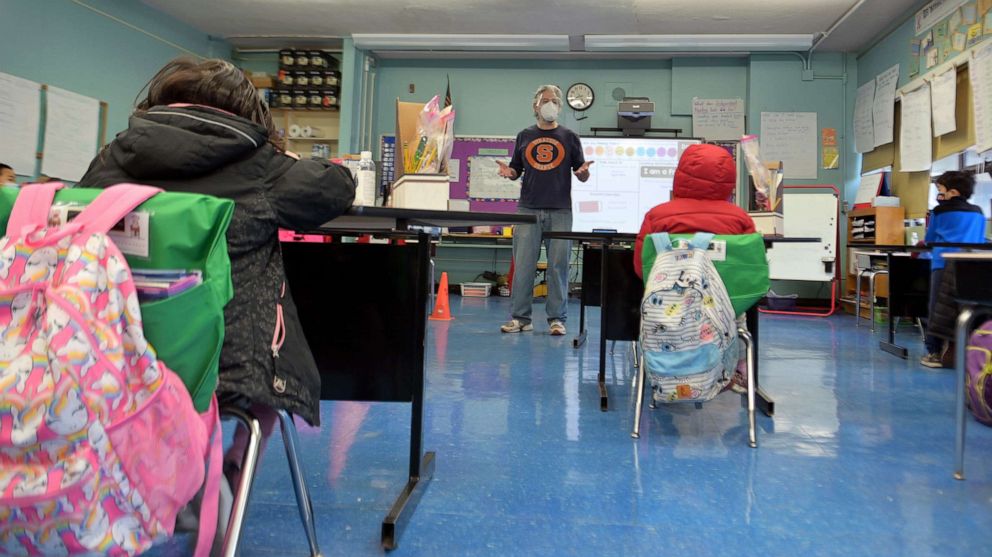 While teachers unions and school systems clash over what is considered a safe return to in-person learning and President Joe Biden looks to reopen a majority of K-8 schools in 100 days, the head of the Centers for Disease Control and Prevention said Wednesday it could be possible to get back to school safely without hinging the return to classrooms on vaccines.

“There is increasing data to suggest that schools can safely reopen and that safe reopening does not suggest that teachers need to be vaccinated in order to reopen safely,” CDC Director Rochelle Walensky told reporters at a briefing. “Vaccination of teachers is not a prerequisite for the safe reopening of schools.”

The Biden administration plans to work with states and localities on ensuring schools can open safely in the U.S. by prioritizing teachers’ vaccinations, enabling widespread testing and providing additional guidance for school administrators on things like how to improve ventilation and PPE. Biden has proposed more than $170 billion for both K-12 schools and higher education institutions as part of his proposal to respond to the pandemic.

Some Republicans have accused Biden of not pushing back against unions hard enough on their conditions for safely reopening schools during COVID-19. Although there are educators who have begun receiving their vaccinations, some local advocacy groups have been pushing back against a full return to in-person classes until all teachers are able to get vaccinated.

“An administration that puts facts and science first would be conducting a full court press to open schools,” he continued.

He called it “goal-post moving” to say that federal money was the problem.

“As of last week, state and local school districts had only spent $4 billion of the roughly $68 billion we set aside for K through 12 schools. That leaves $64 billion in the pipeline already,” McConnell said.

American Federation of Teachers President Randi Weingarten responded to the Senate minority leader’s comments in a statement, saying, “Teachers and school staff want to reopen. They also want to be safe. Why is that so hard for Mitch McConnell to understand?”

“Instead of working with the majority to pass a rescue package, the minority leader is playing politics with children’s and teachers’ lives. He refused to even hold a vote on what schools needed from May to December, effectively delaying reopenings and thwarting the resources needed to keep schools safe in the middle of a pandemic,” the statement continued.

On Capitol Hill Wednesday, Biden’s pick to run the Education Department, Miguel Cardona, was also asked if he thought both teachers and students must be vaccinated before returning to school.

Cardona told senators during his confirmation hearing that he thinks educators should be prioritized for the vaccine rollout, but he noted there are schools that are able to open using mitigation strategies.

“We have great examples throughout our country of schools that are able to reopen safely and do so while following mitigation strategies. While I recognize that that is the case, I do believe that making sure surveillance testing is something that we focus on,” Cardona said.

Some educators argue vaccinations are an essential component to returning to in-person learning full time — last month, the president of the Virginia Education Association, James Fedderman, said in a statement that the state should implement an all-virtual learning curriculum until all school staff are vaccinated.

“The issue is that we should be aligning vaccination with school opening. That doesn’t mean every single teacher has to be vaccinated before you open one school, it means there has to be that alignment,” Weingarten previously said.

Cardona said that if he is confirmed, his focus would be on prioritizing teacher vaccinations and creating a robust testing system so schools that do open can stay open.

“The funding that is being considered now moving forward is really to make sure we recover,” he told the Senate panel.

Citing the need for more counselors and summer programming, Cardona said kids will need help to catch up.

“If we really want to recover, we really need to invest now or we’re going to pay later. And I feel that the funds that are being discussed now are really to help us with a long term recovery process, preventing layoffs, when we need more teachers, not less,” he said.