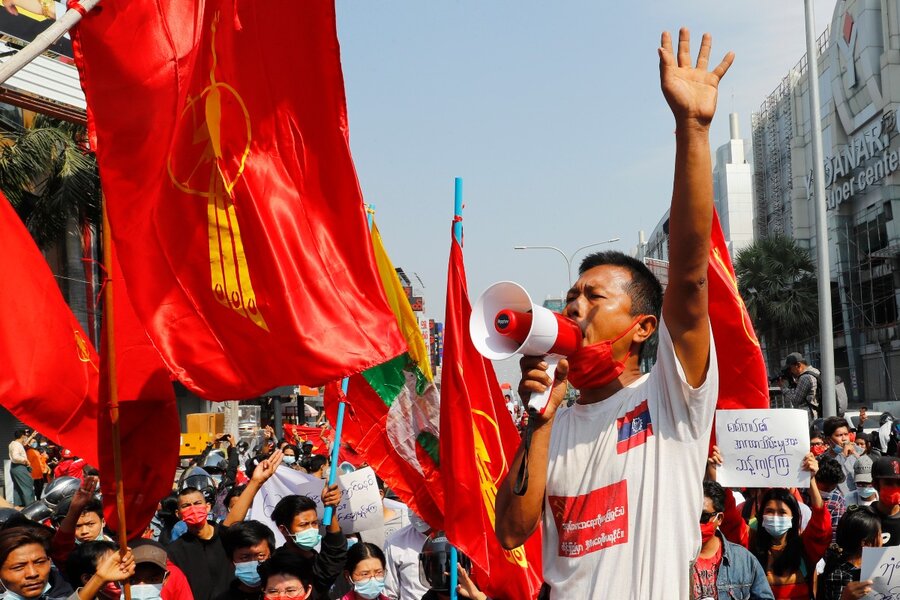 Tens of thousands marched through the streets of Myanmar’s biggest city Sunday to protest last week’s coup ousting Aung San Suu Kyi’s elected government, their spirits lifted by the return of internet services that had been blocked a day earlier.

Separate protests that began in various parts of Yangon converged at Sule Pagoda, situated in the center of a roundabout in the city’s downtown area. Protesters chanted “Long live Mother Suu” and “Down with military dictatorship.” Protesters in other parts of the country echoed their calls.

Authorities had cut access to the internet as the protests grew Saturday, fanning fears of a complete information blackout. On Sunday afternoon, however, internet users in Yangon reported that data access on their mobile phones had suddenly been restored.

The demonstrators are seeking to roll back last Monday’s seizure of power by the military and demanding the release from detention of Ms. Aung San Suu Kyi, the country’s ousted leader, and other top figures from her National League for Democracy party.

The military has accused Ms. Aung San Suu Kyi’s government of failing to act on its complaints that last November’s election was marred by fraud, though the election commission said it had found no evidence to support the claims.

The growing protests are a sharp reminder of the long and bloody struggle for democracy in a country that the military ruled directly for more than five decades before loosening its grip in 2012. Ms. Aung San Suu Kyi’s government, which won a landslide election in 2015, was the first led by civilians in decades, though it faced a number of curbs to its power under a military-drafted constitution.

During Myanmar’s years of isolation under military rule, the golden-domed Sule Pagoda served as a rallying point for political protests calling for democracy, most notably in during a massive 1988 uprising and again during a 2007 revolt led by Buddhist monks.

The military used to deadly force to end both of those uprisings, with estimates of hundreds if not thousands killed in 1988. While riot police have been sent to watch the protests this past week, soldiers have been absent and there have been no reports of clashes.

Several videos posted online Sunday that were said to be from the town of Myawaddy, on Myanmar’s eastern border with Thailand, showed police shooting into the air in an evident effort to disperse a crowd. There were no signs of panic and no reports of injuries.

Showing little fear, protest crowds have grown bigger and bolder in recent days, while remaining nonviolent in support of a call by Ms. Aung San Suu Kyi’s party and its allies for civil disobedience.

In one of Sunday’s gatherings, at least 2,000 labor union and student activists and members of the public gathered at a major intersection near Yangon University. They marched along a main road, snarling traffic. Drivers honked their horns in support.

Police in riot gear blocked the main entrance to the university. Two water cannon trucks were parked nearby.

The mostly young protesters held placards calling for freedom for Ms. Aung San Suu Kyi and President Win Myint, who were put under house arrest and charged with minor offenses, seen by many as providing a legal veneer for their detention.

“We just want to show this current generation how the older generation fights this crisis, by heeding the guideline of Mother Suu, which is to be honest, transparent and peaceful,” said 46-year-old protester Htain Linn Aung. “We don’t want a military dictator. Let the dictator fail.”

Reports on social media and by some Myanmar news services said demonstrations were taking place in other parts of the country as well, with a particularly large crowd in the central city of Mandalay, where there was also a motorbike procession in which hundreds took part, constantly beeping their horns.

Saturday had seen the size of street protests grow from the hundreds to the thousands, but it also saw the authorities cut most access to the internet. Holes in the military’s firewall allowed some news to trickle out, but also fanned fears of a complete information blackout.

Netblocks, a London-based service that tracks internet disruptions and shutdowns, confirmed that there had been a partial restoration of internet connectivity on Sunday, but noted that it might be temporary and social media remained blocked.

The communication blockade was a stark reminder of the progress Myanmar is in danger of losing. During Myanmar’s decades of military rule, the country was internationally isolated and communication with the outside world strictly controlled.

The elected lawmakers of Ms. Aung San Suu Kyi’s party met in an online meeting Friday to declare themselves as the sole legitimate representatives of the people and asked for international recognition as the country’s government.