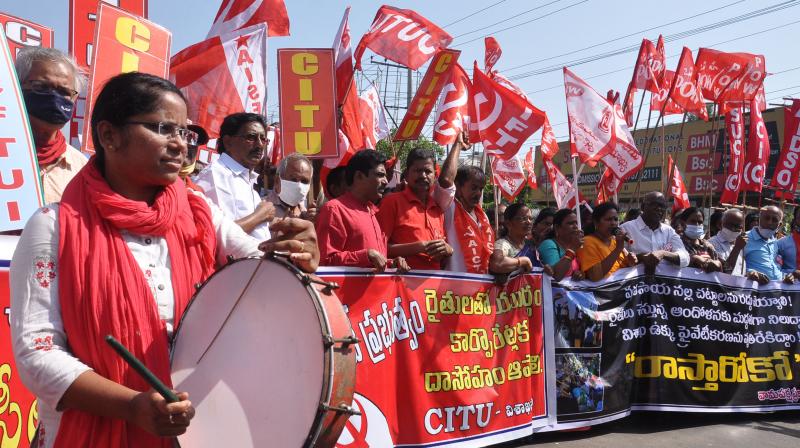 VISAKHAPATNAM: Former minister and Visakhapatnam North MLA Ganta Srinivasa Rao on Saturday sent a resignation letter to Speaker Tammineni Sitaram and said it was in protest against the Centre’s decision to privatise the Visakhapatnam Steel Plant (VSP).

In his letter, the Telugu Desam legislator cited the reason for quitting his elected position as privatisation of RINL (Rashtriya Ispat Nigam Limited). As per norms, no resignation letter should cite any reason for taking such a decision as it amounts to taking the decision under duress. However, the legislator deliberately stated the reason thereby indicating that it was clear drama to gain popularity.

Srinivasa Rao wanted all elected representatives in the state to resign and organise massive protests, so that the Centre is pressurised into withdrawing its decision.

Meanwhile, trade unions and mass organisations continued their sit-in on the national highway at Maddilipalem against VSP’s privatisation for the third day on Saturday. About 29 leaders, including women, belonging to CPM, CPI and affiliated trade unions, HMS, IFTU and AITUC were arrested and bundled into waiting vans. The leaders said their protests are over steel plant’s privatisation as well as opposing farm bills passed by the Centre.

Speaking on the occasion, city CPM secretary B. Ganga Rao said the Modi government’s move to privatise the steel plant is a conspiracy against people of Andhra Pradesh.

The plant came up after 32 people sacrificed their lives for its establishment and farmers of 32 villages gave away their 24,000 acres of land for establishing the country’s only shore-based steel plant. He demanded that all political parties support the agitation all over the state till the union government drops its plan to privatise the plant.

Rao asked BJP leaders to spell their stand instead of making conflicting statements. He wanted Jana Sena leader Pawan Kalyan to snap his ties with BJP and participate in the agitation against privatisation of the steel plant.