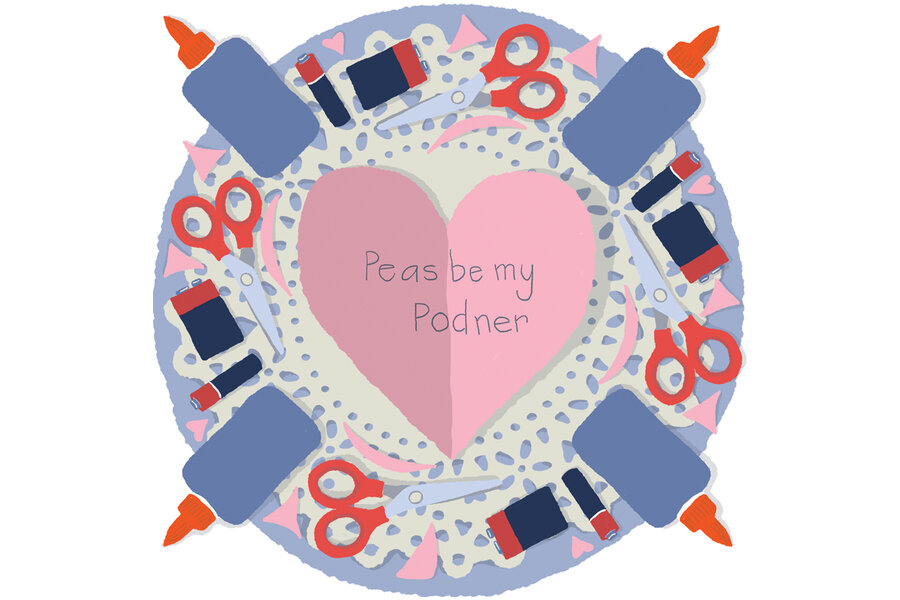 When I was in grade school, Valentine’s Day was still fun. We had pink and red construction paper, white paper doilies, and glue, and most everyone could make a perfect heart by folding the paper in half first. The little rounded scissors were better at denting than cutting, but we got the job done.

You could also get a sheet of valentines for about a nickel that said things like “OH YOU KID” and “PEAS BE MY PODNER,” and you separated them at the perforations and put them on other kids’ desks. We were too young to mean much by it, I hope. Still, no doubt some kids got more valentines than others, and some probably got none.

One Valentine’s Day I was ill at home. My teacher, Mrs. Rejuney, dropped by the house and left a grocery bag full of homemade construction-paper valentines that the whole class made for me. If you don’t want to feel left out on Valentine’s Day, I recommend getting good and sick while having a nice fourth-grade teacher.

I don’t know if they do any of that valentine stuff in school now. Teachers are a lot more careful to avoid hurt feelings, and valentine distribution can be a loaded proposition. It doesn’t get any easier later in life, when Valentine’s Day becomes, for some, an obligation and an invitation to fail, and for others, a chance to feel less appreciated than the diamond merchants assure them they should be.

That wasn’t a trap I ever fell into. The man who became my husband has made my dinner every day for 40 years, and also took care of the laundry, cleaned the bathroom, and kept everything running. A valentine from a guy like that would just be redundant. This might strike some people as perfect, but perfection is not the course of true love, or even true friendship. There are times of fragility. Times that can be pressed upon, later, and still feel tender as a bruise.

For my part, I could have made dinner once a year on Valentine’s Day if I knew how to cook, but it seemed more considerate not to. What I did do was write him a poem. He’s saved them all.

They’re in the form of rhyming coup­lets and have evolved, over the years, as the marital seasons changed, from the salacious to the ironic to the sentimental. It wasn’t clear to Dave what, if anything, he should do for me for the occasion – until one night when all the smoke alarms went off at once.

There’s nothing that makes me come more unglued, and it never, ever happens in the daytime. Dave jumped up and unscrewed all the alarms, which did not stop them from going off, and put them in the freezer.

“I had no idea freezing them makes them stop,” I said, grateful.

He climbed back into bed. “It doesn’t,” he said. “But we can’t hear them in there.” The man is good in a crisis.

The invariably nocturnal smoke-alarm catastrophe occurred at random times. The alarms themselves are a tightknit community. If one of them gets trodden on by a spider, they all go nuts at once in solidarity. One morning, as Dave hauled the miscreants out of the freezer and put in new batteries, he got an idea. He’d change the batteries once a year, whether they needed it or not. For me. And, so he could remember, he would do it on Valentine’s Day. I could think of nothing more romantic.

And so it went, year to year. Poems and batteries – until the year we retired. A lot of things happen when you retire, and one of them is you no longer know what day it is.

One morning that first February, I noticed Dave seemed morose. Only when I opened the newspaper and saw all the references to Valentine’s Day did I realize that I not only had no poem, but it also hadn’t crossed my mind once in the previous weeks. Dave was wounded. Maybe we’d had a bad week. Maybe he thought I didn’t care anymore. I flew into action and wrote an abject apology of a poem, in rhyming couplets, and presented it to him in all humility. But a bruise had been pressed.

Until the very next night, when – I swear – the smoke alarms went off. All at once. And just like that, we’re back. Oh you kid. Peas be my podner.