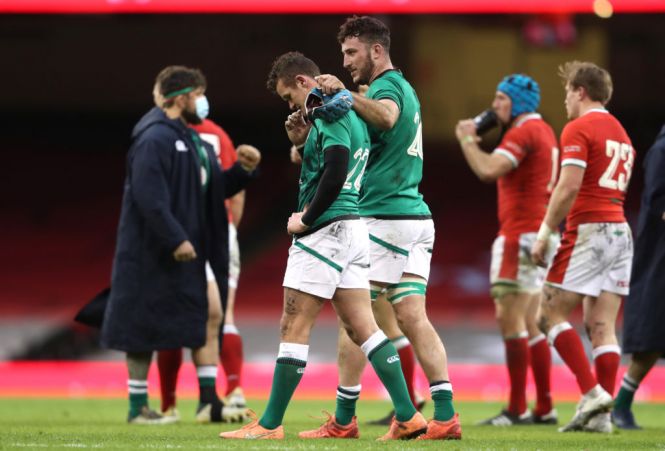 Wales overcame a poor start to defeat 14-man Ireland 21-16 in their opening Six Nations clash at the Principality Stadium on Sunday.

Wales played with an extra man for 66 minutes after Ireland flanker Peter O’Mahony received a deserved early red card, but trailed 13-6 at halftime as they offered little in terms of creativity and quality in the opening period.

As Ireland tired with their numerical disadvantage, Wales found space in the visitors’ 22, and centre North and wing Rees-Zammit crossed for tries, to go with three penalties and a conversion from fullback Leigh Halfpenny.

Ireland will rue that early red card but were still the better side in the first half as they scored a solitary try through lock Tadhg Beirne, and showed plenty of heart in the second period to stay in the contest.

They had the chance to kick for the corner and an attacking lineout five metres out in the last play of the game, but replacement flyhalf Billy Burns booted the penalty too long and referee Wayne Barnes blew the final whistle to cap a frustrating afternoon for the visitors.

Sexton conceded that indiscipline proved costly but also questioned why Wales centre Williams did not join O’Mahony in being sent off following a first-half challenge on Garry Ringrose.

“Ultimately, it came down to a few mistakes at key times and the rub of the green as well.

“There were a couple of decisions where we get red-carded, a high tackle that gets penalised versus one that doesn’t. Apparently they looked at it.

“But Wales are a very good side and we’ve only ourselves to blame,” he continued.

“We spoke about discipline earlier in the week and that let us down at key times, as well as some key unforced errors.”

The match ended in bizarre circumstances when a wayward kick for touch from replacement Ireland fly-half Burns brought proceedings to an end.

“Sometimes you miss, sometimes you get it and you’re a hero but he did have to go for it because it’s a big difference between going 10 metres out and five, it gives us a chance to score.”

There will be relief for Wales coach Wayne Pivac, who won just three of his first 10 tests in charge last year, beating Italy twice and Georgia, and had promised a much-improved showing in this Six Nations.

“It was a nail biting last few minutes for us but it’s nice to get over the line and start the tournament with a win,” Wales captain Alun Wyn Jones told the BBC.

“We just had to win today. It’s key to start with a bang and keep momentum going so we are happy.

“Sometimes it is tough to play against 14 men because they front up. We were on top until that moment (the red card) and then we seemed to ease off a bit.”

O’Mahony was sent off for a dangerous entry into the ruck. He flew into a collision with a stranded Tomas Francis, providing no arms in the engagement with his shoulder leading into the side of the Welsh prop’s head.

Ireland were the better side in the opening period though and the score was 6-6 when Beirne crossed for the game’s first try on 37 minutes.

Wales hooker Ken Owens was too long with his throw into a lineout and Ireland centre Robbie Henshaw picked up the loose ball and broke the home side’s line.

Beirne picked up at the base of the ruck just a metre out and dived over the tryline.

Wales came out for the second period with more purpose and for the first time in the match managed to apply pressure through phases of possession.

North found space in the midfield after a superb offload from replacement loose-forward Josh Navidi, and his dummy and charge to the line brought Wales their first try.

The home side then burst into the lead just before the hour-mark as their extra man began to take its toll.

North and Halfpenny worked the space for Rees-Zammit to supply an athletic finish in the corner.