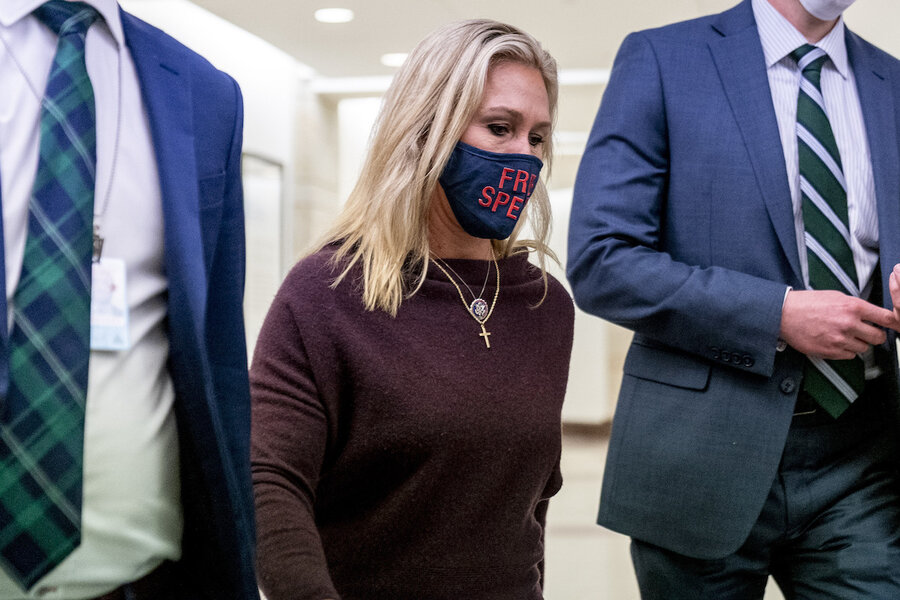 A fiercely divided House has tossed Rep. Marjorie Taylor Greene off both her committees, an unprecedented punishment that Democrats said she’d earned by spreading hateful and violent conspiracy theories.

Underscoring the political vise her inflammatory commentary has clamped her party into, nearly all Republicans voted against the Democratic move Thursday but none defended her lengthy history of outrageous social media posts.

Yet in a riveting moment, the freshman Republican from a deep-red corner of Georgia took to the House floor on her own behalf. She offered a mixture of backpedaling and finger-pointing as she wore a dark mask emblazoned with the words “FREE SPEECH.”

The chamber’s near party-line 230-199 vote was the latest instance of conspiracy theories becoming pitched political battlefields, an increasingly familiar occurrence during Donald Trump’s presidency. He faces a Senate trial next week for his House impeachment for inciting insurrection after a mob he fueled with his false narrative of a stolen election attacked the Capitol.

Thursday’s fight also underscored the uproar and political complexities that Ms. Greene – a master of provoking Democrats, promoting herself, and raising campaign money – has prompted since becoming a House candidate last year.

Addressing her colleagues, Ms. Greene tried to dissociate herself from her “words of the past.” Contradicting past social media posts, she said she believes the 9/11 attacks and mass school shootings were real and no longer believes QAnon conspiracy theories, which include lies about Democratic-run pedophile rings.

But she didn’t explicitly apologize for supportive online remarks she’s made on other subjects, as when she mulled about House Speaker Nancy Pelosi being assassinated or the possibility of Jewish-controlled space rays causing wildfires. And she portrayed herself as the victim of unscrupulous “big media companies.”

News organizations “can take teeny, tiny pieces of words that I’ve said, that you have said, any of us, and can portray us as someone that we’re not,” she said. She added that “we’re in a real big problem” if the House punished her but tolerated “members that condone riots that have hurt American people” – a clear reference to last summer’s social justice protests that in some instances became violent.

Ms. Greene was on the Education and Labor committee and the Budget committee. Democrats were especially aghast about her assignment to the education panel, considering the past doubt she cast on school shootings in Florida and Connecticut.

The political imperative for Democrats was clear: Ms. Greene’s support for violence and fictions were dangerous and merited punishment. Democrats and researchers said there was no apparent precedent for the full House removing a lawmaker from a committee, a step usually taken by their party leaders.

The calculation was more complicated for Republicans.

Though Mr. Trump left the White House two week ago, his devoted followers are numerous among the party’s voters, and he and Ms. Greene are allies. Minority Leader Kevin McCarthy, R-Calif., hopes GOP victories in the 2022 elections will make him speaker.

Republicans could undermine that scenario by alienating Mr. Trump’s and Ms. Greene’s passionate supporters, and Mr. McCarthy took no action to punish her.

“If any of our members threatened the safety of other members, we’d be the first ones to take them off a committee,” Ms. Pelosi angrily told reporters. She said she was “profoundly concerned” about GOP leaders’ acceptance of an “extreme conspiracy theorist.”

At one point, No. 2 Democratic leader Steny Hoyer of Maryland strode to the GOP side of the chamber carrying a poster of a Greene Facebook post from last year. “Squad’s Worst Nightmare,” Ms. Greene had written in the post, which showed her holding an AR-15 firearm next to pictures of three of the four Democratic lawmakers, all young women of color, who’ve been nicknamed “The Squad.”

“They are people. They are our colleagues,” Mr. Hoyer said. He mimicked Ms. Greene’s pose holding the weapon and said, “I have never, ever seen that before.”

Mr. McCarthy said Ms. Greene’s past opinions “do not represent the views of my party.” But without naming the offenders, he said Ms. Pelosi hadn’t stripped committee memberships from Democrats who became embroiled in controversy. Among those he implicated was Rep. Ilhan Omar, D-Minn., who made anti-Israel insults for which she later apologized.

“If that’s the new standard,” he said of Democrats’ move against Ms. Greene, “we have a long list.”

Rep. Tom Cole, R-Okla., said Democrats were setting a precedent by punishing lawmakers for statements made before they were even candidates for Congress. Rep. Jim Jordan, R-Ohio, warned, “You engage in wrong-speak, you’re in the Thunderdome,” a term for an enclosed wrestling arena.

Committee assignments are crucial for lawmakers for shaping legislation affecting their districts, creating a national reputation and raising campaign contributions. Even social media stars like Ms. Greene could find it harder to define themselves without the spotlights that committees provide.

Not all Republicans were in forgiving moods, especially in the Senate. There, fringe GOP candidates have lost winnable races in recent years and leaders worry a continued linkage with Mr. Trump and conspiracists will inflict more damage.

Mr. Thune said House Republicans needed to issue a “really strong” rebuke of Ms. Greene’s conspiratorial formulations. Republicans must “get away from members dabbling in conspiracy theories,” Mr. Thune said. “I don’t think that’s a productive course of action or one that’s going to lead to much prosperity politically in the future.”

The fight came a day after Republicans resolved another battle and voted to keep Rep. Liz Cheney, R-Wyo., in their leadership. Pro-Trump conservatives tried removing her because she supported Mr. Trump’s impeachment.

The House resolution punishing Ms. Greene was barely over a page. It said House rules require lawmakers’ behavior to “reflect credibly” on the chamber and said Ms. Greene should be removed “in light of conduct she has exhibited.”

News organizations have unearthed countless social media videos and “likes” in which Ms. Greene embraced absurd theories like suspicions that Hillary Clinton was behind the 1999 death of John F. Kennedy Jr. Ms. Greene responded, “Stage is being set,” when someone posted a question about hanging Ms. Clinton and former President Barack Obama.