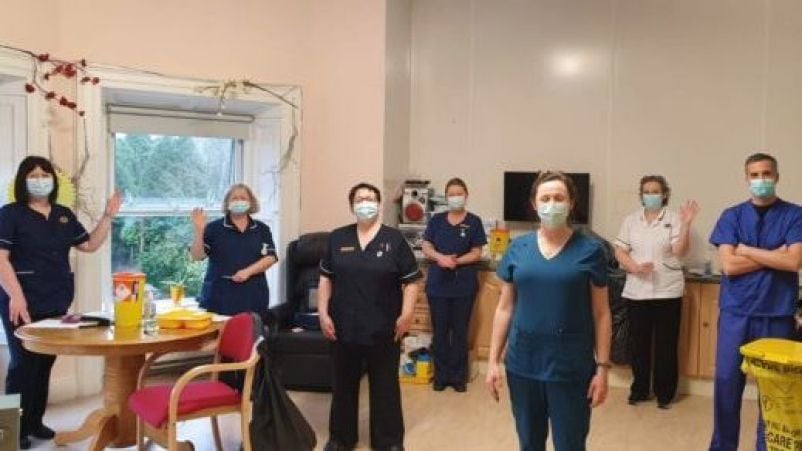 Staff at St Brigid’s Hospital in Shaen when Covid-19 vaccines arrived in January.

A nursing home in Co Laois has answered a call made by An Garda Síochána for the Irish public to get involved in the viral “Jerusalema” dance challenge.

The Laois Nationalist reports that staff at St Brigid’s Hospital in Shaen took on the challenge in a heart-warming video featuring masked nursing home staff dancing outside, while more staff wave Irish flags in the background.

The footage, posted by Annette Lowndes, also features photos of residents enjoying “a much-needed lift” to their spirits, watching out the windows.

It comes after exchanges between the gardaí and the Swiss Federal Police over the dance challenge attracted attention, with the Swiss police flying the Irish flag from one of their buildings this week in praise of the gardaí’s take on the dance.

In January, Swiss police officers filmed themselves dancing to the Master KG song in small groups, wearing their various uniforms and protective gear.

Gardaí posted their response on Twitter this week, saying “Gardaí across Ireland answered the call to give the public we serve a lift in these challenging times.”

Similar to the Swiss attempt, the Irish video features clips from gardaí at various locations around the country, including the Garda College in Templemore, all performing the same routine.

Gardaí also extended the challenge to the public, asking them to share their attempts using #GardaJerusalema while staying at home and in their support bubbles, adhering to current Level 5 restrictions.