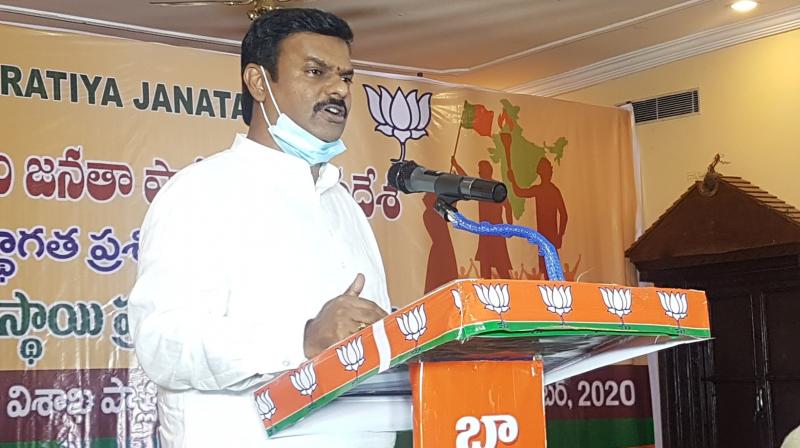 Visakhapatnam: Senior BJP leader and MLC PVN Madhav said on Sunday that the state unit of the party would strongly oppose any blanket privatisation of public sector units in Visakhapatnam.

Addressing the media here along with the BJP national general secretary Daggubati Purendeswari, Madhav said Visakhapatnam grew up with the PSUs and the “local people are emotionally attached to these industries.”

He reminded the people that it was the BJP that had prevented privatization of Hindustan Shipyard Ltd, which was then merged with the Defence department, the BHPV with BHEL and recently the Dredging Corporation of India with the Visakhapatnam Port Trust.

Madhav said the central leadership of the BJP has been making a review of performance of the loss-making and profit-recording PSUs and aiming to propose a strategic merger as was done with the loss-making banks.

“The state BJP is opposing the decision taken by the Union Cabinet Committee on Economic Affairs on the privatization move. We will rather suggest a strategic merger, preferably a PSU with the steel plant, to prevent losses and expand the operations further,’’ Madhav said.

He however said it was incorrect to say that the steel plant was being sold for Rs1,500 crore or that the 24,000 acres of its land was being given away to private entities on a platter.

The MLC has promised that not a single acre of land would be given away and the present status of the plant would remain the same.

He said a few state BJP leaders accompanied him to Delhi and they held discussions with the central leaders on the issue. “We explained to them the emotional attachment the people of Andhra Pradesh have with the steel plant,” he said.

Earlier, Purendeswari had said she along with other BJP leaders from AP would visit New Delhi and hold discussions with the central leaders. “We will explain them the history of the steel plant and the sacrifices made by the people to set up the plant. However, it would be up to the ministry to take the decision,’’ she had said.

She noted that it was the BJP under the leadership of Prime Minister Atal Behari Vajpayee that saved the steel plant from being referred to BFIR when it was incurring huge losses. The government then invested Rs 1300 crore with the RINL, she said.