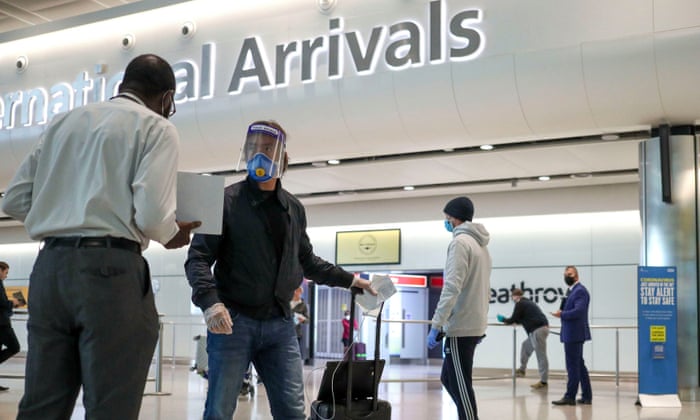 The government is scrambling to limit the impact of the South African variant of coronavirus after a study indicated that the Oxford/AstraZeneca vaccine offers minimal protection against it for mild to moderate infection. With 147 confirmed cases in the UK, what are ministers’ options?

A quarantine plan is already being put together, with arrivals from countries seen as high risk from new variants due to face mandatory quarantine for 10 days from 15 February. Labour and other opposition parties have questioned why this is not happening sooner – on Monday, Downing Street said no contracts had yet been awarded to hotels for holding arrivals – or whether the list of countries should be broader. The full plans are not due to be announced until next week.

The most thorough way to prevent new variants arriving in the UK would be to attempt a New Zealand-style near-total border closure, with small numbers of people only allowed in after quarantine. However, that would bring significant complications, including the amount of road freight that arrives in the UK every day, and the land border between Northern Ireland and the Republic of Ireland.

This is being attempted, with door-to-door testing taking place in 10 areas of England where the South African variant has been confirmed. But containing and isolating the strain completely could be difficult, requiring not just significant participation in the tests, but the guarantee that those who test positive will self-isolate. So far in the pandemic, self-isolation rates have often been low, with minimal or nonexistent sick pay for those off work cited as a common factor.

The Kent variant of Covid-19 – which is more transmissible, but does not seem to be resistant to vaccines – has become dominant in the UK, but much of this seems to have happened before the third lockdown in England began in early January. Maintaining the restrictions on almost all social mixing would certainly help contain the spread of new variants. But it would pit Boris Johnson against many Conservative backbenchers, who want significant easing, along with the full reopening of schools, to begin in early March, after the four most vulnerable demographic groups have been offered a first vaccination.

This is a contingency that governments around the world have been planning for, and appears inevitable. It was always known that a Covid-type virus would mutate as it spread through populations, and that this could include the emergence of variants that were partly or wholly resistant to vaccines developed for earlier incarnations. The expectation was that populations, or at least more vulnerable members within it, could well need annual vaccinations to provide some immunity to new variants, as happens with the flu.

However, it could now happen that people in the UK will get a third, “booster” vaccine dose later this year, to provide additional protection against new variants. On Friday the government announced that it had signed a deal with a German manufacturer to help develop vaccines that could combat new variants, and had placed advance orders for at least 50m doses of these.