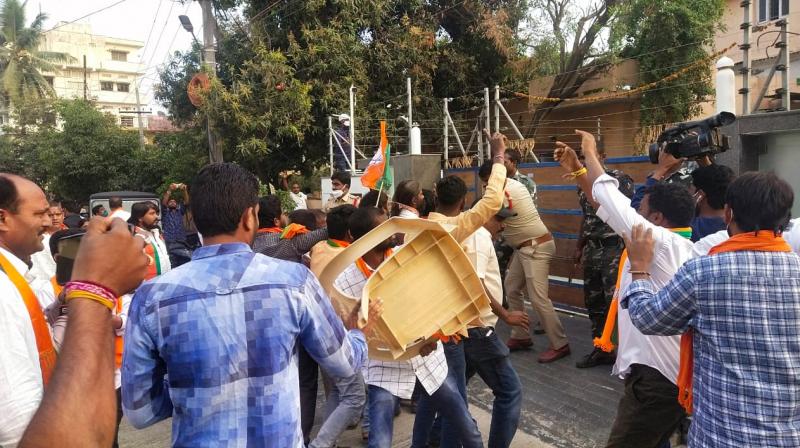 WARANGAL: Parkal TRS legislator Challa Dharma Reddy on Sunday once again spoke on the Ram mandir in Ayodhya, the second time in four days, alleging that the BJP was using Lord Rama for political gains and giving fake receipts after collecting money.

He is the second TRS MLA to speak against the fund collection drive, after party colleague from Korutla, K. Vidyasagar Rao.

Dharma Reddy alleged that fake books were prepared to collect funds in the name of the Ram temple at Ayodhya. He asked where the funds collectod for the Ayodhya temple are going.

“When the government spent `2,900 crore for the Sardar Patel statue, why can’t it spare another `11 crore for Ayodhya,” he asked.

On January 28, the MLA had said, “We have Lord Rama in Bhadrachalam. Why do we need your Lord Rama in Ayodhya?”

On Sunday, Dharma Reddy said, “It is outrageous that the BJP leaders are collecting donations. Only after showing the proper documentation of the funds must they resume collecting funds. The people are being intimidated in the name of donations. I am a true devotee of Lord Rama and built a temple for Him in my hometown," he said.

The BJP acivists resorted to throwing stones and damaged the glass panes of the house and also the flower pots. Police forces rushed to the spot and baton-charged the angry mob. A scuffle ensued as the police tried to arrest the protestors and shift them in vehicles. Police arrested the mob and lodged them at the Subedari police station.

“Why should people from the state give money for the temple, which is coming up in Uttar Pradesh? Are we not capable of constructing Ram mandirs in our villages? We too are true devotees of Lord Sri Rama,” Vidyasagar Rao had said.

This triggered intense protests and clashes between TRS and BJP activists in Metpally and Korutla towns. Vidyasagar Rao said the next day, “I am ready to collect donations (for the Ram mandir at Ayodhya) if I am given a receipt book by the Ram Janbhoomi Trust,” the ruling party legislator clarified on Friday.

He observed: “When BJP is collecting donations from the people, why has it not sent receipt books to TRS leaders and MLAs for mobilising donations. Are we not devotees of Lord Rama?