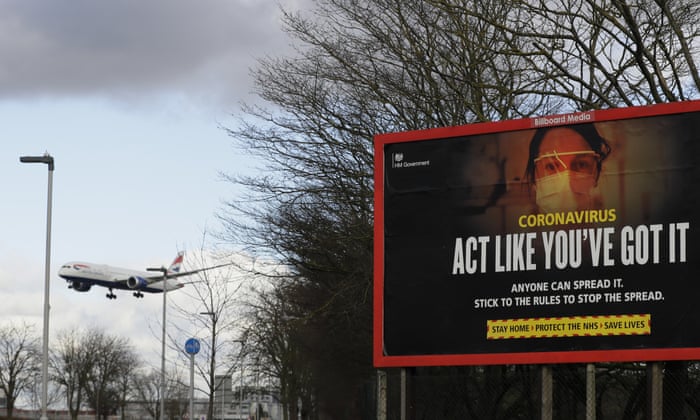 Covid-19 has accounted for the highest proportion of deaths in England and Wales of any week so far during the pandemic, claiming more than half of lives lost in some areas, according to new data.

Data released by the Office for National Statistics (ONS) on Tuesday showed that the virus was mentioned on death certificates in 55% of all cases in the east of England in the last week of January.

The spread of new variants also helped push the absolute number of deaths from Covid to its second-highest level of the crisis so far. But deaths from other causes remain well below the average and fell to their lowest level for five years, according to Prof Sir David Spiegelhalter, the chair of the Winton Centre for Risk and Evidence Communication at the University of Cambridge.

Across England and Wales, coronavirus was recorded as having been involved in nearly half of all deaths, or 46%. In the week ending 29 January, Covid pushed death tolls in all English regions higher than the five-year average for the 12th week in a row. But deaths not involving the virus were 22% below the five-year average, the ONS said, continuing a trend that began in October.

“There is almost no flu circulating, and sadly many vulnerable older people, who would have survived until now, have already had their lives shortened,” said Spiegelhalter. “Up to 29 January, ONS report over 126,000 deaths involving Covid-19 in the UK, more than half of which have occurred in the second wave since September. So by now the total will be over 135,000.”

Weekly deaths where coronavirus was mentioned on the death certificate rose to 8,433 in England and Wales, bringing the rate from the latest wave of infection close to the peak in the first wave around Easter, when 8,758 deaths were recorded in England and Wales in the week ending 18 April 2020.

However, more recent figures show Covid deaths are likely to have peaked. In England and Wales, the seven-day average of people dying within 28 days of a positive Covid test has fallen from a peak of 1,190 deaths on 22 January to 829 a day by last Tuesday.

“Deaths will decline more slowly than might have been expected prior to the dominance of the ‘Kent’ B117 variant, for which the evidence is that it has a higher rate of fatalities for those infected,” said Rowland Kao, a professor of veterinary epidemiology and data science at the University of Edinburgh. “This, and the still-high numbers of deaths, means that continued vigilance needs to applied.”

Declining death tolls are reflected in care homes, which, despite stringent efforts at infection control, bans on routine visits and attempts to limit infection spread from staff, have once again endured serious outbreaks, in many cases with the large majority of staff and residents affected and multiple deaths.

“We cannot forget that Covid-19 is still taking a terrible toll amongst the most vulnerable,” said Mike Padgham, the chair of the Independent Care Group, a Yorkshire-based trade association. “This second wave has been every bit as devastating as the first and we cannot let up in our fight against coronavirus. People are starting to talk about routes out of Covid-19 and the lockdowns, but for those caring for our oldest and most vulnerable, we are still at a critical point in this fight.”

On Tuesday, 12,364 cases were recorded after positive test results, the lowest figure since 8 December and down 26.6% on last week. The 1,052 new deaths was the highest figure since Friday, but less than the 1,449 deaths announced a week ago. The total number of deaths over the last seven days is 25.7% down on the figure for the previous week.