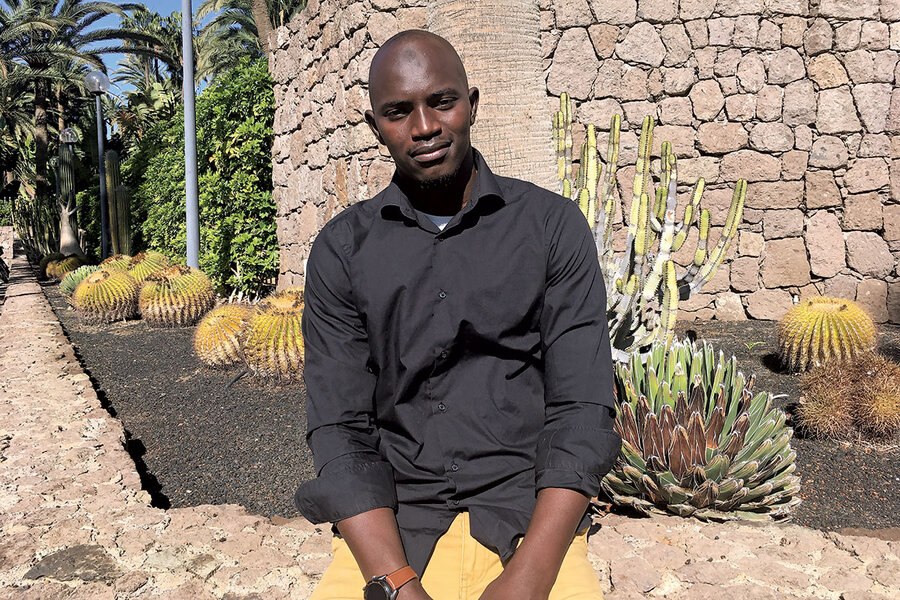 A winding road snakes up the hillside of Ayagaures, a hamlet nestled deep in the valleys of Gran Canaria. Goats graze alongside quaint stone houses, a glimmer of the Atlantic set in the distance. The calm tranquility offers a clean slate, the perfect place to start over.

At the Deamenac Ayagaures center for youth migrants, two dozen young men are trying to focus on today’s lesson: math, in Spanish. With classes on the local language and how to navigate Spanish bureaucracy, they hope to be able to do what they spent days crossing an ocean to do: work.

But that won’t come overnight, and no one knows it better than staff member Aboubacar Drame. In 2006 at age 17, Mr. Drame left his family home in Mali, boarded a patera fishing boat in search of better opportunities, and spent four days at sea before arriving in Arguineguín, Gran Canaria.

When he reached port, he was placed in a migrant center in nearby Arinaga. After two years there, the staff offered him a job. Now, at Deamenac Ayagaures, Mr. Drame translates between Spanish and African languages, teaches new migrants the local customs, and helps them fill out paperwork.

And as the Canary Islands face the largest swell of migration since 2006 – around 22,000 people arrived from North and West Africa last year – he has extended his efforts beyond his 9-to-5 job to volunteer with new migrants on nights and weekends.

More than practical support, Mr. Drame and other former migrants like him are proving invaluable resources to aid groups, offering a blend of compassion and tough love – based on their own lived experience – that is helping migrants adjust to their new circumstances while also giving realistic advice about how they can succeed. They’re also countering fears some locals may have of new arrivals, thereby bridging local and migrant communities.

“I tell these young men the truth, that I went down the same path as them … but that things are not going to be easy,” says Mr. Drame. “Many think they’ll come here and get a job right away, buy a house. It’s not like that. I’ve been here for 14 years, I have Spanish nationality and a job … and it’s still hard.”

Stepping up amid a crisis

Mr. Drame’s life back in Mali wasn’t stricken with war or famine. He had an education, lived in a meager home, and worked as an Arabic teacher for two years in Mauritania. But he was getting increasingly frustrated, watching all of his earnings go to his father. It’s what ultimately pushed him to leave.

Gibril Nija, from Gambia, had a similar experience. In 2012 at the age of 16, he left for Senegal without telling his parents, working for eight months as a fisherman before joining a patera headed to Europe.

“My mother was very protective of me, but my father always told me I needed to be strong, to be a man,” says Mr. Nija. “So one day when I was home alone, I opened the window – no bag, no money – and left.”

Since arriving in Tenerife, Mr. Nija has worked both in Spain and abroad. But when he returned after a two-month stint as a carpenter in Zurich to find his adopted home in the throes of a migration crisis, he decided to volunteer with a local aid group.

Mr. Nija now works out of a hotel in Adeje, in the south of the island, where more than 400 migrants are being housed. Like Mr. Drame, Mr. Nija helps migrants with police intake, medical visits, and Spanish bureaucracy. He also sneaks in used clothing, mobile phone SIM cards, and skin cream for the men, whose legs and feet arrive cracked and peeling from days spent soaking in the ocean water that lines their boats.

“I’m living off my savings right now, so eventually I’ll need to look for a job,” he says. “But for now, I’m happy doing this.”

Mr. Nija and Mr. Drame’s volunteerism comes when tension across the Canary Islands is at an all-time high. Amid a pandemic that has destroyed tourism and left 30% of people here unemployed, the regional government has faced criticism about its handling of the migration crisis. Some say the government should have been more prepared after the 2006 surge, when over 30,000 migrants arrived on the islands.

“There is an overwhelming lack of room for decent reception,” says Elena Lugli, president of aid group Médicos del Mundo Canarias. “However, we do not believe this is due to lack of financial resources or personnel. Rather, it is due to a lack of political will and coordination between public administrations.”

Despite efforts to relocate them to government facilities, around 7,000 migrants remain in hotels, much to the chagrin of some locals who complain that the migrants are living a five-star life. In mid-December, the Red Cross told migrants across Gran Canaria to stay indoors, after a group of residents in Arguineguín – where several thousand migrants were left stranded for weeks in November – were videotaped shouting insults at migrants and allegedly harassing a group of Moroccans.

“In the Gambia, I never thought about racism, I never thought I’d face it like I have here,” says Mr. Nija. “If you don’t live it yourself, you see it, you hear it, with gestures, looks, words. Everyday. … It’s extremely painful.

“These men are not living like kings. They’re eating sandwiches and pasta everyday. Many have been here for two months and only have one pair of pants. They wash them at night and dry them over their balcony. They wake up and wear them again the next day.”

Immigration experts say that when former migrants work with aid agencies, they can help new migrants properly prepare for the challenges they may face, like racism, integration, or finding a job – and it’s best that they don’t sugarcoat those hardships.

“Obviously it’s hard. We are not a 100% accepting society,” says María Fonte García, a professor of social education for the El Observatorio de la Inmigración de Tenerife at the Universidad de La Laguna. “Hearing from former migrants is a good thing. They don’t lie to them, and they help them redefine their dreams and goals so they can be successful.”

Mr. Drame and Mr. Nija’s brand of volunteerism can also act as a bridge between migrants and local communities – to anchor them as fully participating citizens in society and provide a long-term impact on how communities see migrants, new and old.

“In order to counteract the fear some people have about those from other cultures, it’s important for [migrants] to hold visible positions in society,” says Ms. Fonte García. “When they do this, they normalize and create a positive image of new migrants.”

At the hotel in Adeje, Mr. Nija is on the front lines. But even as his savings start running dry, he doesn’t plan on looking for a paid job just yet.

“Sometimes when I listen to their stories, it makes me want to cry,” says Mr. Nija. “But hearing their problems, what they’ve gone through, it makes me forget my own.”