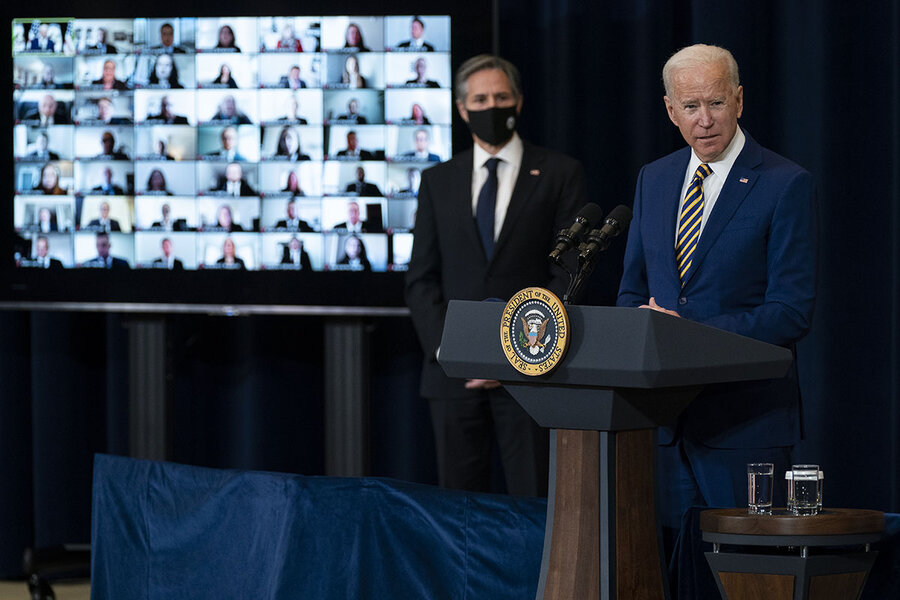 “There were several themes running through Biden’s speech, the return to values-based foreign policy being front and center, but a more subtle idea was this significant focus on diplomacy as the mainstay of U.S. engagement abroad,” says Charles Kupchan, a senior fellow at the Council on Foreign Relations in Washington who served on President Barack Obama’s National Security Council.

“I took that as a signal of a recalibrating from the over-militarization of American foreign policy,” he adds. “You’re seeing a pivot to a brand of American engagement that is more about diplomacy than it is about military intervention.”

Senior U.S. officials, including Robert Gates, when he served as President George W. Bush’s defense secretary, have warned of an over-reliance on the military in foreign affairs and a dangerous depletion of America’s diplomatic presence and power on the global stage.

Mr. Biden is pledging to rebuild the diplomatic corps and retool it for a world where America relies less on its hard power. And in his speech he appeared to make the war in Yemen an example of a shift to using the “muscles” of soft power.

For almost six years, the United States has supplied the Saudi-led coalition waging war in Yemen with arms, including weaponry involved in attacks on the civilian population. Some studies estimate that nearly a quarter of a million Yemenis have died as a result of the war and war-related famine.

But over the same period, the war has made few advances against the Iranian-backed Houthi rebels, who now control an estimated 80% of Yemeni territory.

On Friday, President Biden reversed the designation by the Trump administration, in its waning days, of the Houthis as a foreign terrorist organization. The reversal is in part intended to facilitate delivery of humanitarian aid to Yemenis in Houthi-controlled territory.

Mr. Biden’s cutoff of offensive weaponry was not unexpected nor a 180-degree turn for U.S. policy. In 2019 Congress voted to end military support for the Saudi-led war, a measure that was vetoed by Mr. Trump. Then-Secretary of State Mike Pompeo also used his emergency powers to ensure an uninterrupted flow of armaments to Gulf partners.

As part of his step back from the militarization of U.S. foreign policy, Mr. Biden also announced a freeze on arms sales to Saudi Arabia and other Gulf states while a review is conducted.

U.S. arms sales to the region have skyrocketed over the course of the war in Yemen. According to a recent study by the Stockholm International Peace Research Institute, U.S. arms sales to Saudi Arabia surged from about $3 billion in the five years preceding the start of the Yemen war in 2015 to more than $64 billion over the last six years.

Still, some foreign policy analysts say that while they heard hints of a good start in the president’s words, they expect Mr. Biden to go further if his intention really is to pivot away from a reliance on military intervention.

“The United States isn’t back [on the world stage]; it never left,” says Benjamin Friedman, policy director at Defense Priorities, a Washington organization that advocates a refocusing of security policy on core national defense needs.

The U.S. under President Trump may have left the Paris climate accord and the World Health Organization, he says, but it “did not abandon any alliances – in fact alliances grew, with new forces sent to the Middle East in service of the foolish quasi-alliance with the Saudis and to Eastern Europe.”

Some foreign policy experts found the president’s speech light on how he plans to confront America’s major adversaries, from China and Russia to Iran.

But others saw President Biden’s purpose more as a message to an American public weary of overseas interventions that the task of rebuilding and strengthening America runs through a robust engagement with the world.

“There’s no longer a bright line between foreign and domestic policy,” Mr. Biden told his State Department audience. “Investing in our diplomacy isn’t something we do just because it’s the right thing to do for the world,” he said. “We do it in order to live in peace, security, and prosperity. We do it because it’s in our naked self-interest.”

Indeed, Mr. Biden’s repeated intention to follow a “foreign policy for the middle class” is acknowledgment that he must convince a wary public that a robust American role in the world is good for them, says Mr. Kupchan, who just published a new book, “Isolationism: A History of America’s Efforts to Shield Itself From the World.”

“Knowing the country has to some extent turned inward, Biden set out to make the point that we’re going to rebuild the country at home and we’re going to strengthen and rebuild our ties abroad, and those two are really part of the same objective,” he says.

Whether Mr. Biden made any headway with one speech is unclear, but Mr. Kupchan says Americans should expect to hear the same message again as Mr. Biden pursues diplomacy’s return.

“In many respects [the speech] was a response to the Trump era and to the many Americans who have felt the U.S. was spending too much time solving other people’s problems and not enough time solving problems at home,” he says. “By illuminating the ties between security and prosperity at home and engagement abroad, he was making the case that the two go hand in hand.”