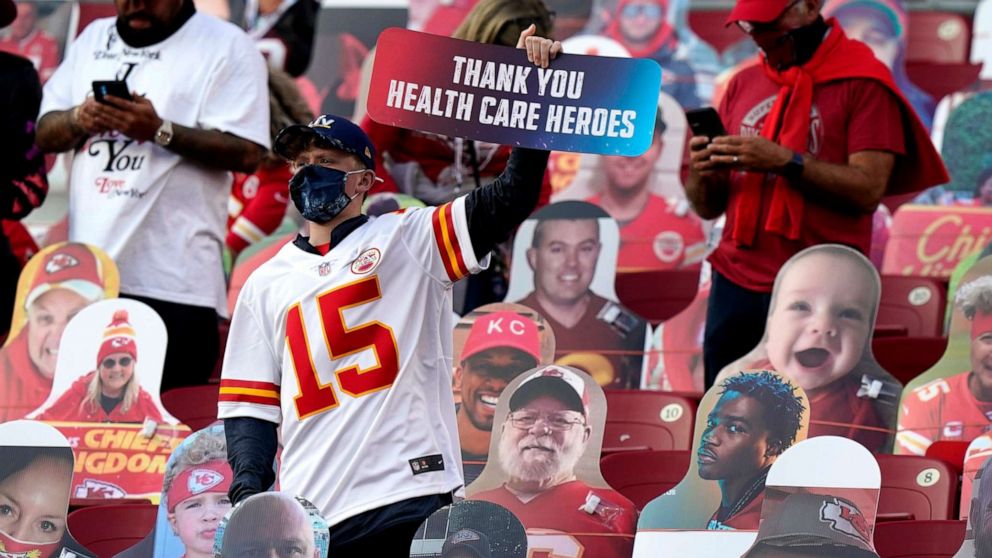 Quarterbacks Tom Brady and Patrick Mahomes were not the only stars of Super Bowl LV.

The health care workers who have been working tirelessly to keep the COVID-19 virus at bay were honored during the first Super Bowl game ever played during a pandemic.

Here is how the NFL put a spotlight on health care workers.

Message from the first family

President Joe Biden and first lady Jill Biden made a video appearance before kickoff to send a special message of gratitude to front-line workers.

“With all our hearts, thank you,” Jill Biden said.

Before a moment of silence, the president reminded Americans to do their part to help end the pandemic.

“Let’s remember, we all can do our part to save lives,” Joe Biden said. “Wear masks. Stay socially distance. Get tested.”

NFL Commissioner Roger Goodell invited 7,500 health care workers to attend the game, according to the league.

Only 22,000 of the nearly 66,000 seats at Raymond James Stadium, home to the Tampa Bay Buccaneers, were available for fans.

Most came from hospitals and health care systems in the Tampa and central Florida area, but all 32 NFL teams were able to select health care workers from their communities, according to the NFL.

All of the health care workers in attendance received both doses of the vaccine.

In addition to the tickets, a game day experience was held for the health care workers, the NFL said.

“These dedicated health care workers continue to put their own lives at risk to serve others, and we owe them our ongoing gratitude,” Goodell said in a statement.

The NFL hosted the #TikTokTailgate, a pregame event for the health care workers in attendance, which was headlined by pop star Miley Cyrus.

Cyrus confirmed the news in several Instagram posts prior to game day.

“I can’t wait to put on a show for the NFL’s honored guests before the game…. Health care workers from Tampa and around the country!” she wrote Jan. 24.

Only health care workers were in attendance, according to the NFL.

Suzie Dorner, a nurse manager at Tampa General Hospital, is not only cheering for her hometown football team but was honored on the field as well.

Dorner, who was named as one of the three honorary Super Bowl captains, has been working in Tampa for more than eight years and has “worked selflessly, as all nurses do, to prioritize others and work endless hours” throughout the pandemic, according to the NFL. She lost two grandparents to COVID-19 as well.

The pandemic has been “really mentally, emotionally and physically exhausting” for all health care workers, Dorner said.

The honorary captains — Dorner, as well as a Los Angeles educator and a Marine Corps veteran from Pittsburgh — took part in the coin toss ceremony before kickoff Sunday.

Amanda Gorman, the National Youth Poet Laureate who stunned the nation with an original piece at Biden’s inauguration, recited another original poem dedicated to the honorary captains.

Dorner tossed the coin, representing the 7,500 vaccinated health care workers present and the others around the world.