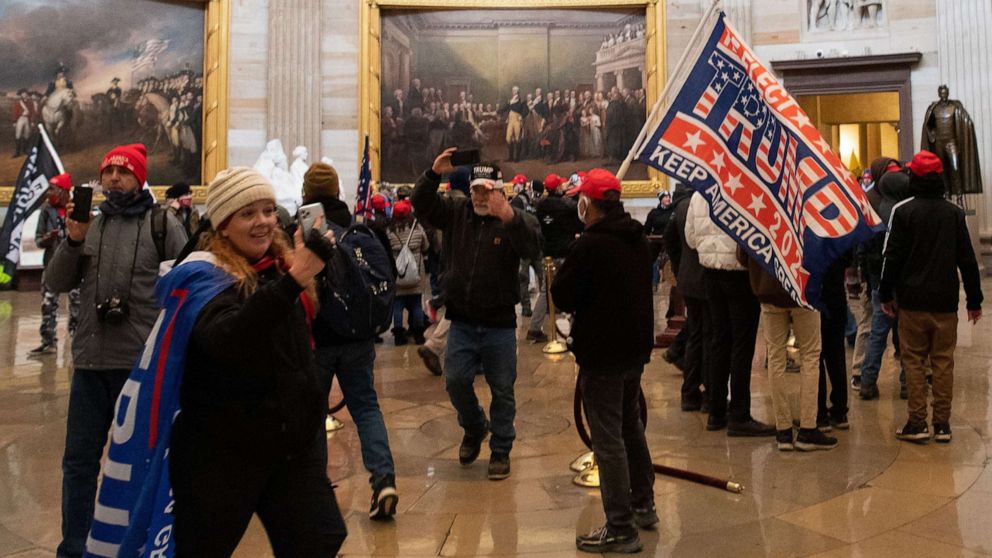 A woman arrested in connection with the attack on the U.S. Capitol will be able to go on a prepaid trip to Mexico this month, after a judge granted her request Friday.

Jenny Cudd, a flower shop owner in Midland, Texas, initially faced two misdemeanor charges — entering a restricted building and violent or disorderly conduct — after allegedly posting a social media video in which she boasted about participating in last month’s Capitol riot, according to the FBI affidavit.

She was released on a personal recognizance bond on Jan. 21, under conditions that require any travel outside the continental United States be approved by the court.

On Monday, her lawyer requested just that. As stated in the filed motion, before her alleged participation in the siege on the Capitol, Cudd had “planned and prepaid for a weekend retreat with her employees” in the Riviera Maya from Feb. 18 to 21.

“This is a work-related bonding retreat for employees and their spouses,” her lawyer, Farheena Siddiqui, wrote.

In support of the request, Siddiqui noted that Cudd has no criminal history, is a U.S. citizen, has remained in “constant contact” with her attorney and, as ordered, is in contact with pretrial probation services.

According to the motion, Cudd’s pretrial services officer has no objection to the travel request, and the prosecutor advised that the government “takes no position” on it.

DC District Court Judge Trevor McFadden approved the request on Friday, noting in the order that Cudd has no criminal history and doesn’t appear to be a flight risk or danger to others. She is required to give her trip itinerary to her pretrial services officer.

Since the motion’s filing, Cudd was indicted Wednesday on more serious charges, including obstruction of an official proceeding — a felony that carries a maximum prison sentence of 20 years and substantial fines if convicted. She faces five total charges.

As part of the terms of her pretrial release, Cudd is also ordered to “stay away” from Washington, D.C., except for matters pertaining to her case, and must notify the Pretrial Services Agency of any travel outside of her home state of Texas. She was also ordered to surrender any passport to the agency and to not obtain a passport or any other international travel document.

ABC News had reached out to her lawyer for comment after filing the motion but did not receive a response.

Cudd, who unsuccessfully ran for mayor of Midland in 2019, is an “established member of her community,” the motion stated.

Authorities identified her in a photo posing inside the Capitol building on Jan. 6. She also made statements in a since-removed Facebook livestream “indicating her admission of entering the U.S. Capitol,” the FBI affidavit stated, including allegedly being a part of the crowd that stormed the Capitol and broke into House Speaker Nancy Pelosi’s office.

According to the affidavit, Cudd said in the video, “We did break down Nancy Pelosi’s office door, and somebody stole her gavel and took a picture sitting in the chair flipping off the camera.”

According to the affidavit, Cudd went to the Capitol after attending former President Donald Trump’s Jan. 6 “Save America Rally,” held near the White House as Congress gathered to certify the election of President Joe Biden.

The affidavit also referenced a Jan. 8 interview Cudd gave to a local news station, during which she reportedly said, “We the patriots did storm the U.S. Capitol … Yes, I would absolutely do it again.”

As of Jan. 26, the Department of Justice has identified 400 suspects and charged 135 in connection with the attack on the Capitol.