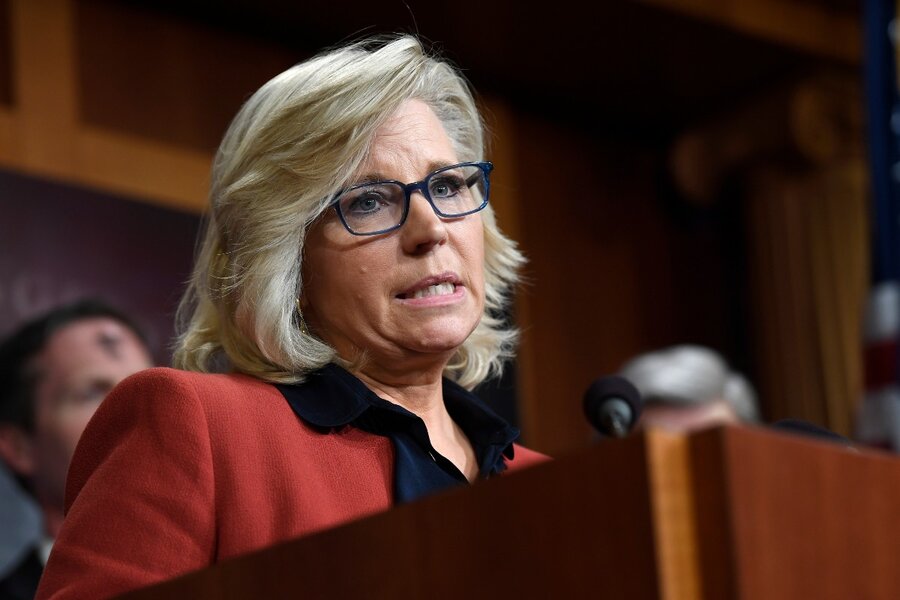 Rep. Liz Cheney, the third-ranking House GOP leader, said Sunday she was undeterred by a censure from Wyoming Republicans and criticism from some House colleagues over her vote to impeach Donald Trump, and will not resign or back off her repudiation of the former president.

She suggested that if she were in the Senate, she might vote to convict Trump over his role in the Jan. 6 riot at the Capitol. Trump’s trial in the Senate begins Tuesday.

“I would listen to the testimony — I would listen to the evidence,” Cheney told “Fox News Sunday.” “I obviously believe and did then that what we already know is enough for his impeachment. What we already know does constitute the gravest violation of his oath of office by any president in the history of the country, and this is not something that we can simply look past or pretend didn’t happen or try to move on.”

“We’ve got to make sure this never happens again,” she said.

On Saturday, the Wyoming Republican Party voted overwhelmingly to censure Cheney. Only eight of the 74-member state GOP’s central committee opposed the punishment in a vote that did not proceed to a formal count. The censure document accused Cheney of voting to impeach Trump, even though the House didn’t offer him “formal hearing or due process.”

That followed a 145-61 secret-ballot vote this past week in the nation’s capital in which House Republicans overwhelmingly rebuffed a rebellion by hard-right conservatives to toss Cheney from leadership over her impeachment vote.

“We need to honor President Trump. All President Trump did was call for a peaceful assembly and protest for a fair and audited election,” said Darin Smith, a Cheyenne, Wyoming, attorney who lost to Cheney in the Republican primary for the House seat in 2016. “The Republican Party needs to put her on notice.”

Cheney has said repeatedly she voted her conscience in backing impeachment for the riot, which followed a rally where Trump encouraged supporters to get rid of lawmakers who “aren’t any good, the Liz Cheneys of the world.”

Far from leading a peaceful demonstration, Trump “summoned this mob, assembled the mob, and lit the flame of this attack,” Cheney said in a statement before the Jan. 13 impeachment vote. About two-thirds of House Republicans voted to back Trump’s effort to overturn his November election loss — just hours after his supporters’ deadly siege of the Capitol.

“Somebody who has provoked an attack on the United States Capitol to prevent the counting of electoral votes, which resulted in five people dying, who refused to stand up immediately when he was asked and stop the violence — that is a person who does not have a role as a leader of our party going forward,” she said Sunday.

“People have been lied to,” she said Sunday. “The extent to which the president, President Trump, for months leading up to Jan. 6 spread the notion that the election had been stolen or that the election was rigged was a lie.”

Rep. Debbie Dingell, D-Mich., said she was “afraid to say anything good about Ms. Cheney, I might get her in trouble. But she voted her conscience and we’re all going to have to find some ways to put all of this bickering aside because the American people are counting on us to get some things done.” Sen. Pat Toomey, R-Pa., called Cheney “a terrific, capable leader.”

Cheney, the daughter of former Vice President Dick Cheney and a fixture of the party establishment, blasted her state party for the censure, noting that state Republicans embraced conspiracy theories such as the inaccurate claim that non-Trump supporters were behind the violent protests.

She also was critical of her House colleagues for standing behind Rep. Marjorie Taylor Greene, saying that her party — not Democrats — should have been the ones to punish the hard-right Georgia Republican for her online embrace of racist and violent views and bizarre conspiracy theories. The Democratic-led House on Thursday voted to strip Greene of her assignments on the House Education and Budget committees, with only 11 Republicans joining to support the move.

“We are the party of Lincoln, we are not the party of QAnon or anti-Semitism or Holocaust-deniers, or white supremacy or conspiracy theories. That’s not who we are,” Cheney said.

“We need to make sure that we as Republicans are the party of truth and that we’re being honest about what really did happen in 2020, so we actually have a chance to win in 2022 and win the White House back in 2024,” she said.

Dingell was on CNN’s “Inside Politics” and Toomey appeared on CNN’s “State of the Union.”