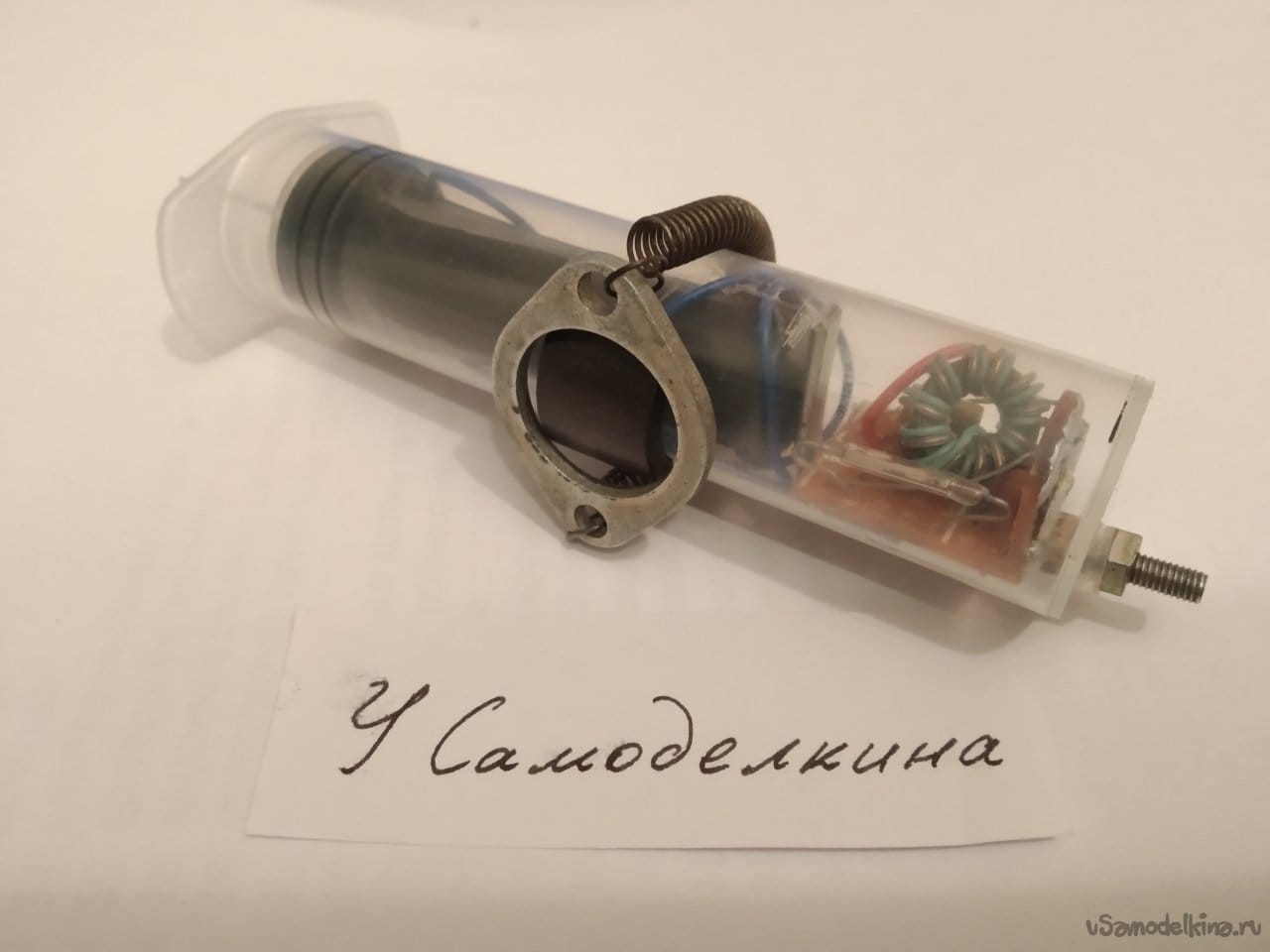 Hello. In this article I will tell you how to make a simple sealed flashlight from a plastic syringe and available radio components. Such a flashlight can be useful for fishermen or tourists. Due to the simplicity of the design and the cheapness of the parts used, it is not a pity to lose or break it.
Materials and tools:
– syringe 20 ml;
– breadboard;
– winding wire with a diameter of 0.3 mm (or twisted pair);
– bipolar transistor KT310 (BC547) or similar;
– resistor 1 kOhm; < br> – ferrite ring from an energy-saving lamp;
– super bright white SMD LED 2pcs;
– reed switch ;
– magnet;
– tension spring;
– hold-down fastening a transistor (or other metal element of a similar shape);
– solder;
– rosin (or other flux for soldering radio components)
– screw М3x 20 mm (or fastening from fuel assemblies);
– mounting wires;
– rectangular file.
Pull the piston out of the syringe, after why shorten its rod, leaving about 1.5 cm after the piston, and cut off the part of the cylinder on which the needle is put on (leaving a small protrusion at the base). 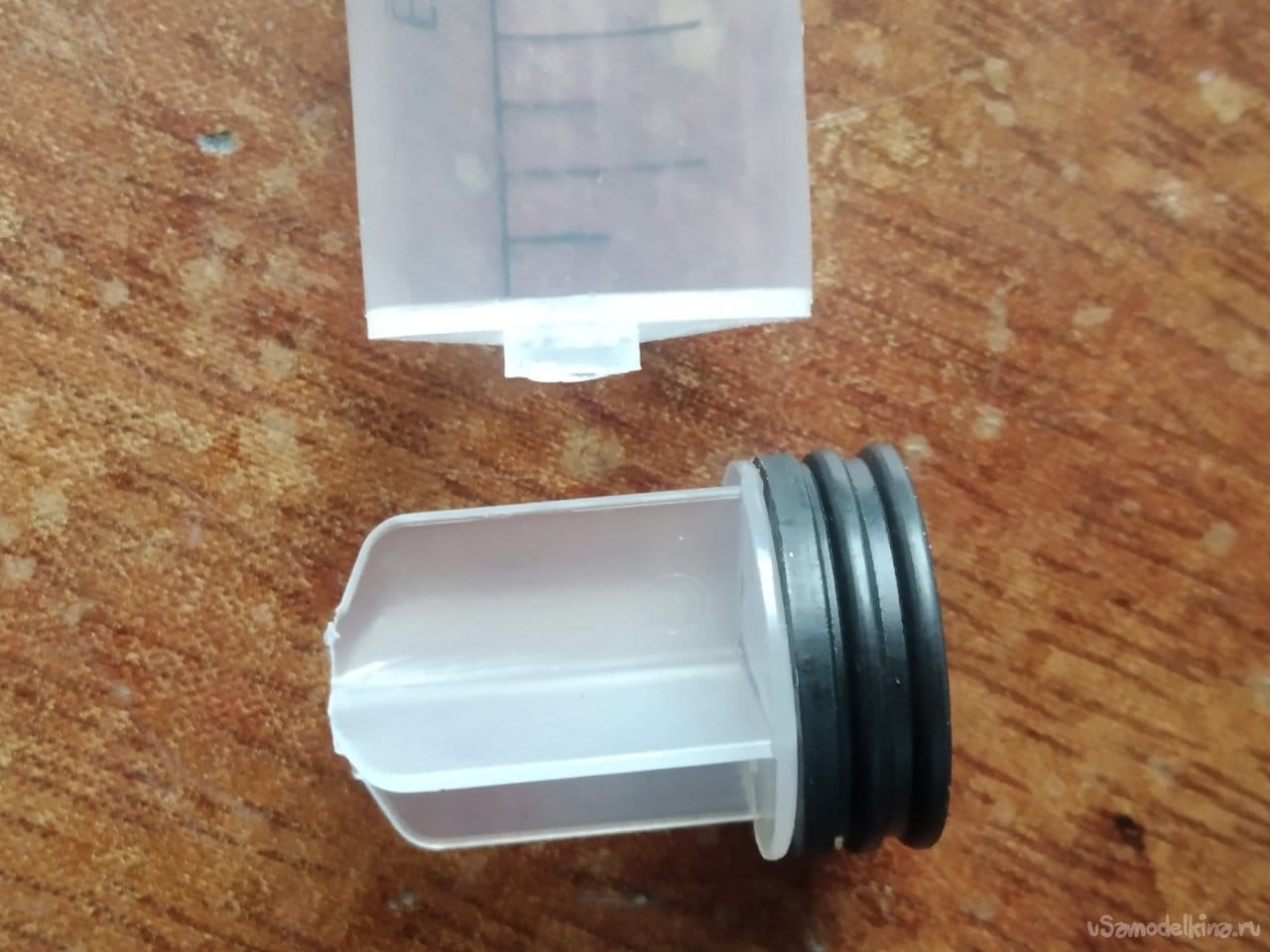 Then you need to make a mount that will unite the printed circuit board and the case-casing. For this, I used a TVS mount from a Soviet TV. This fastening is convenient because there is a rectangular section behind the threaded part, which simplifies its bending. 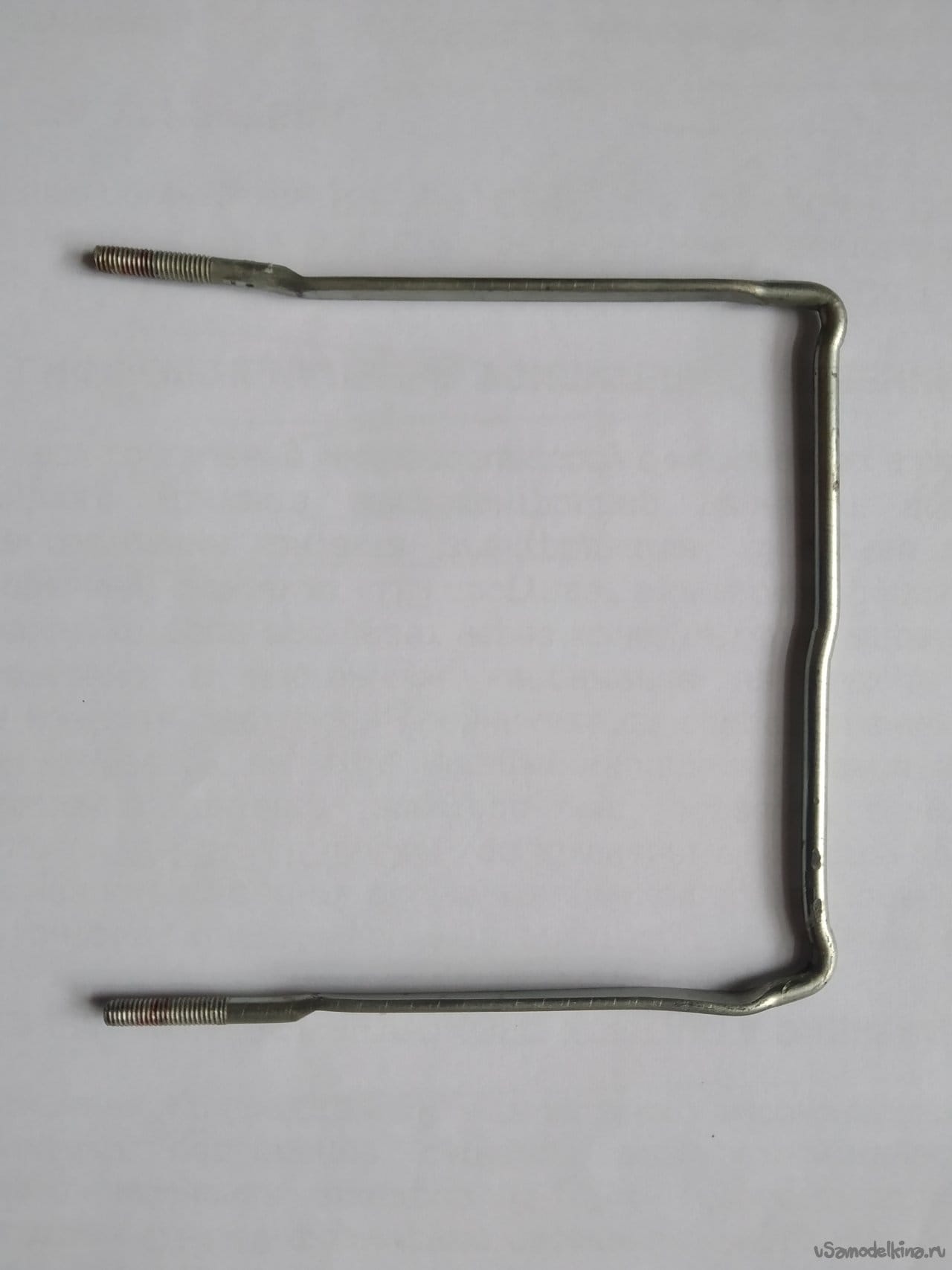 A segment of rectangular section, bent at an angle of 90 degrees, serves to separate the space of the battery compartment from the location electronic circuit.
The element installed in the body looks like in the photo below. 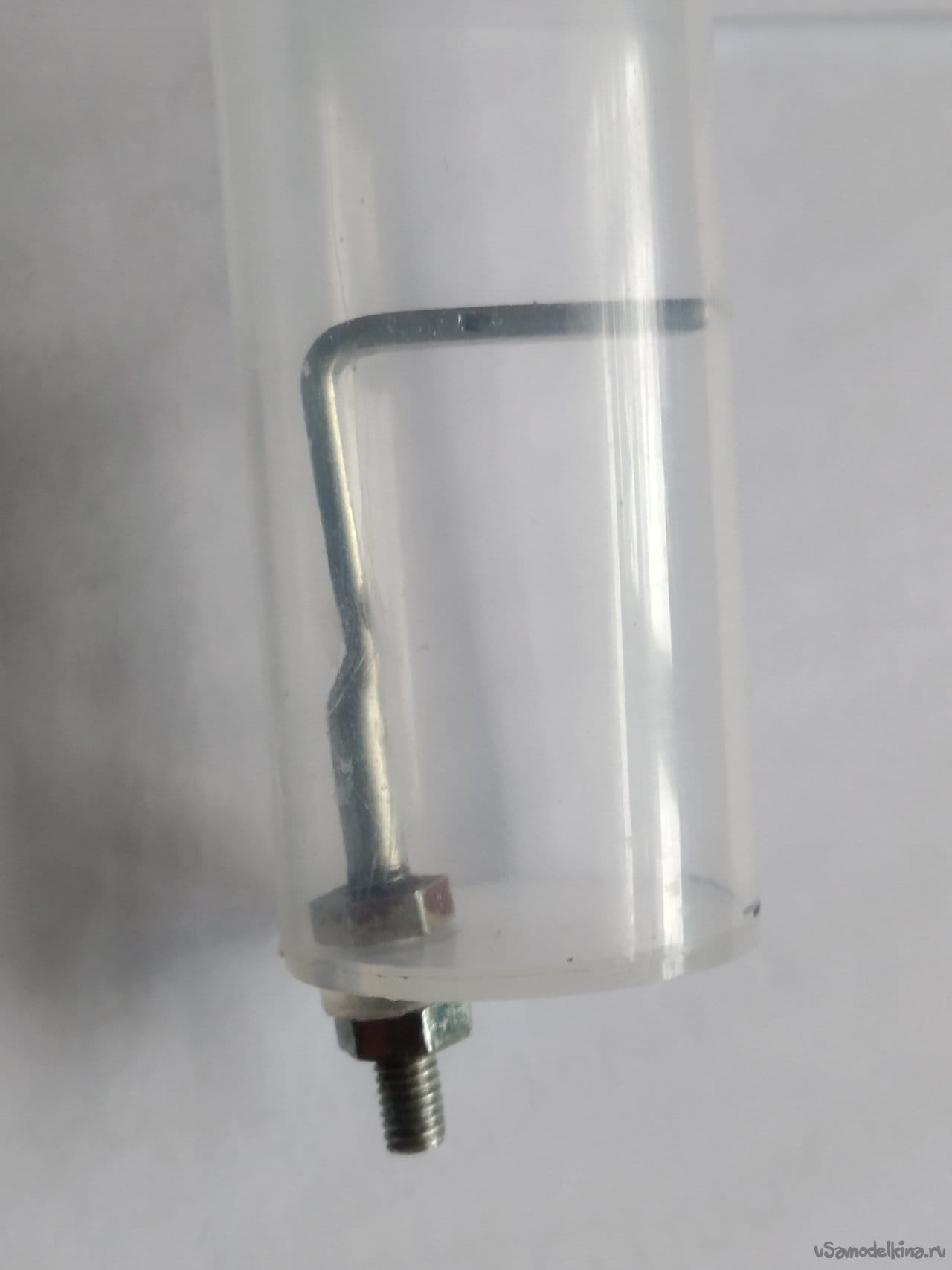 Now you can proceed to making the electronic part of the flashlight. I used an AA battery as a power source. But its voltage is 1.5 V, and the LEDs need at least 3 V for normal operation, so a boost converter must be used. As the latter, I have chosen a well-known scheme called “joule thief”.
This scheme looks like this:
In my case, not one LED was used, but two connected in parallel. Bipolar transistor n-p-n type, I used a domestic kt315 from old stocks, but you can also use a foreign analogue, for example, BC547 or others. The circuit works as a simple blocking generator, creating high voltage pulses.
First of all, it is necessary to make a board on which the radio components will be located, and a board for LEDs. To do this, I used a piece of the breadboard, cutting out two blanks, I processed their edges with a file. A part with two rounded corners is intended for installing LEDs. 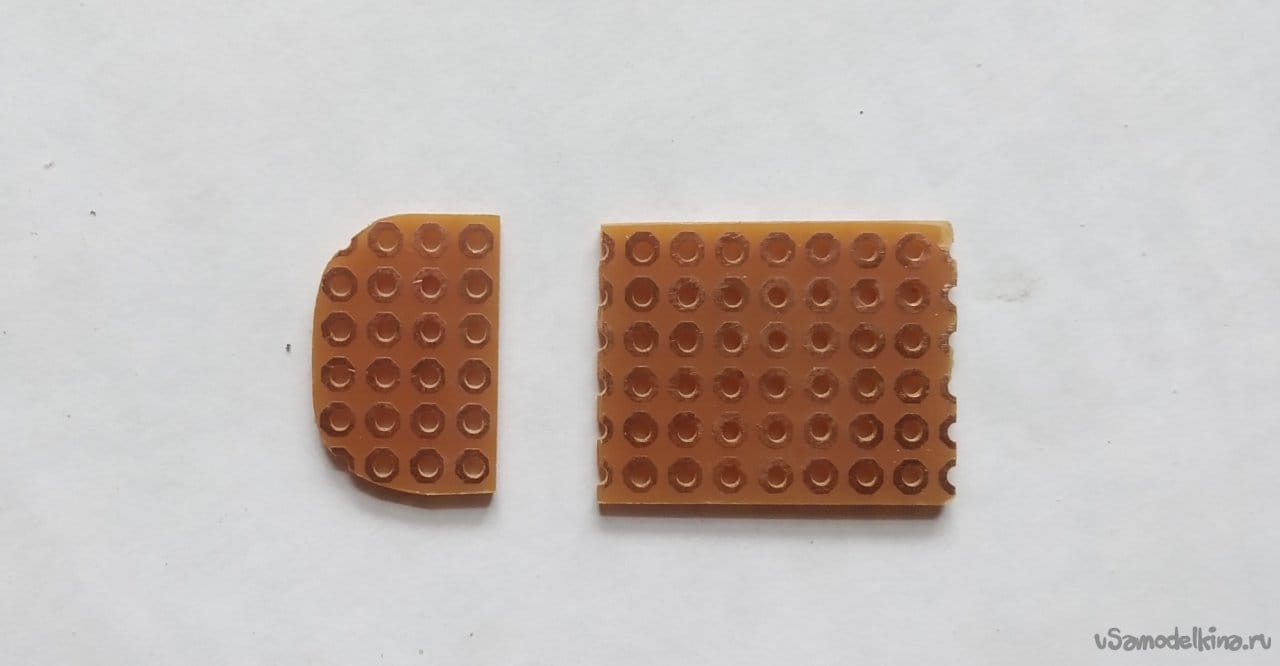 To the board with with rounded corners, two pieces of tinned wire should be soldered, as shown in the photo below. 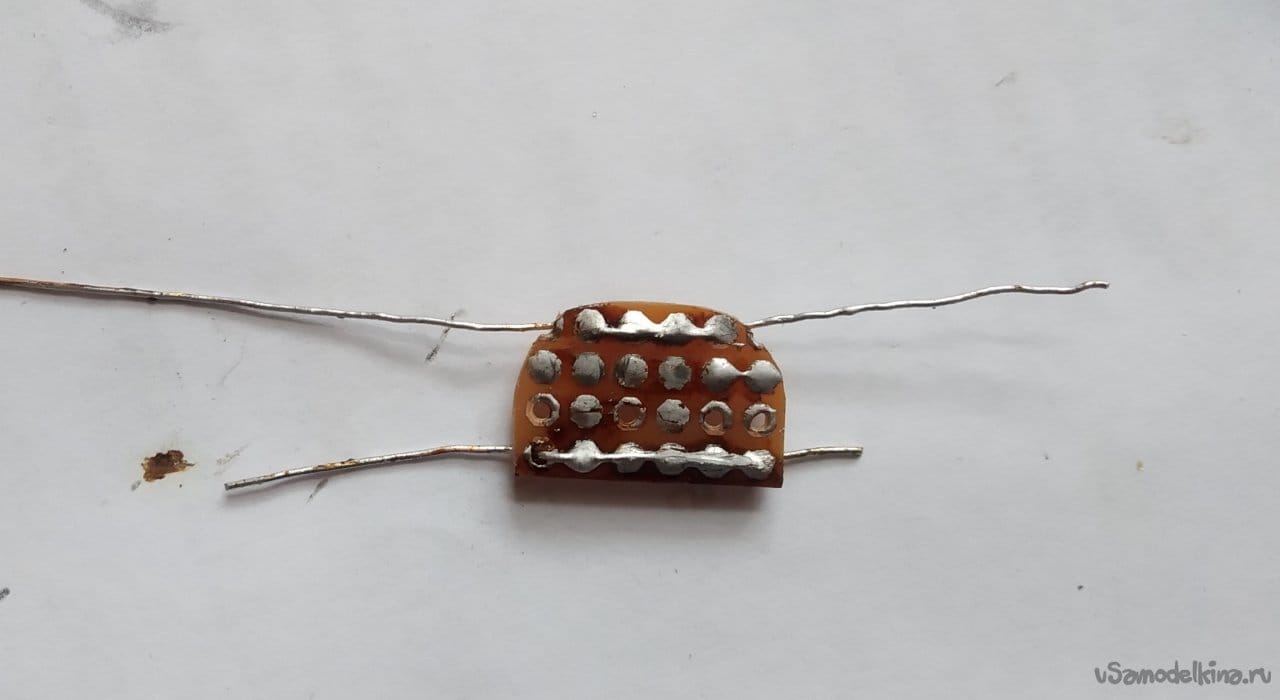 Now you can solder the LEDs, I used the ones designed for LED lamps. It is important to observe the polarity when installing the LEDs, in the case of LEDs in a DIP package, everything is quite simple, the long pin is connected to the plus of the power supply, and the one that is shorter to the minus. In the case of SMD LEDs, pay attention to the shape of the case. One of the corners will be slightly cut off, the lead (or leads in the case of placing several crystals in one package) located on the side of the cut corner is the cathode and is connected to the power supply minus.
Then I connected this part to the board on which the rest of the elements will be located using the wire leads soldered earlier.
Now you should go to the manufacture of the coil. The ferrite ring can be removed from an energy-saving lamp, or from a faulty power supply. The outer diameter of the ring should not exceed 10-12 mm. As a winding wire, you can use a twisted pair wire or use a wire in enamel insulation, which is easy to get from the same energy-saving lamp or power supply. For clarity, I used wires in insulation of different colors. About 7-11 loops are enough (in my case 10 loops). 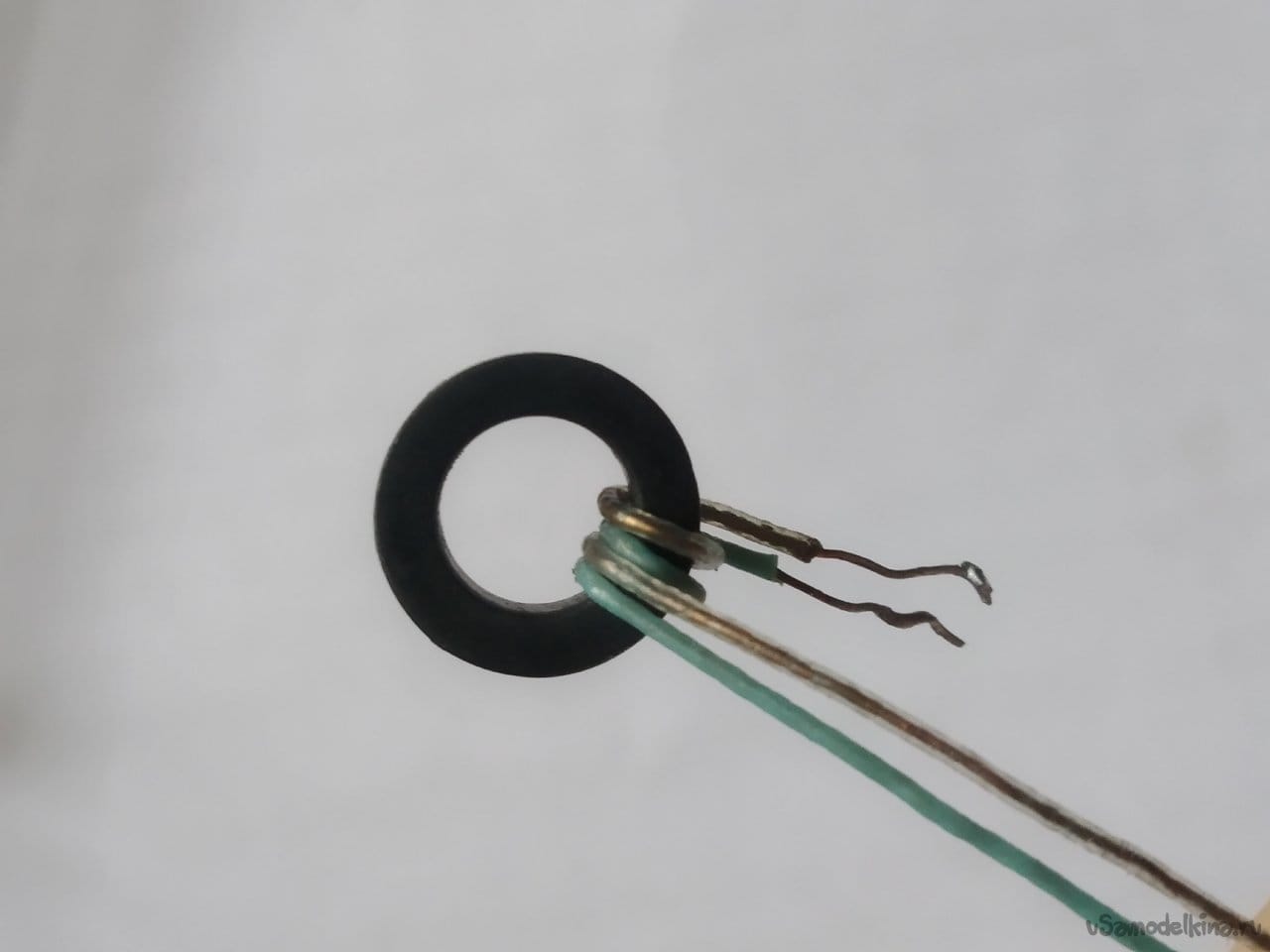 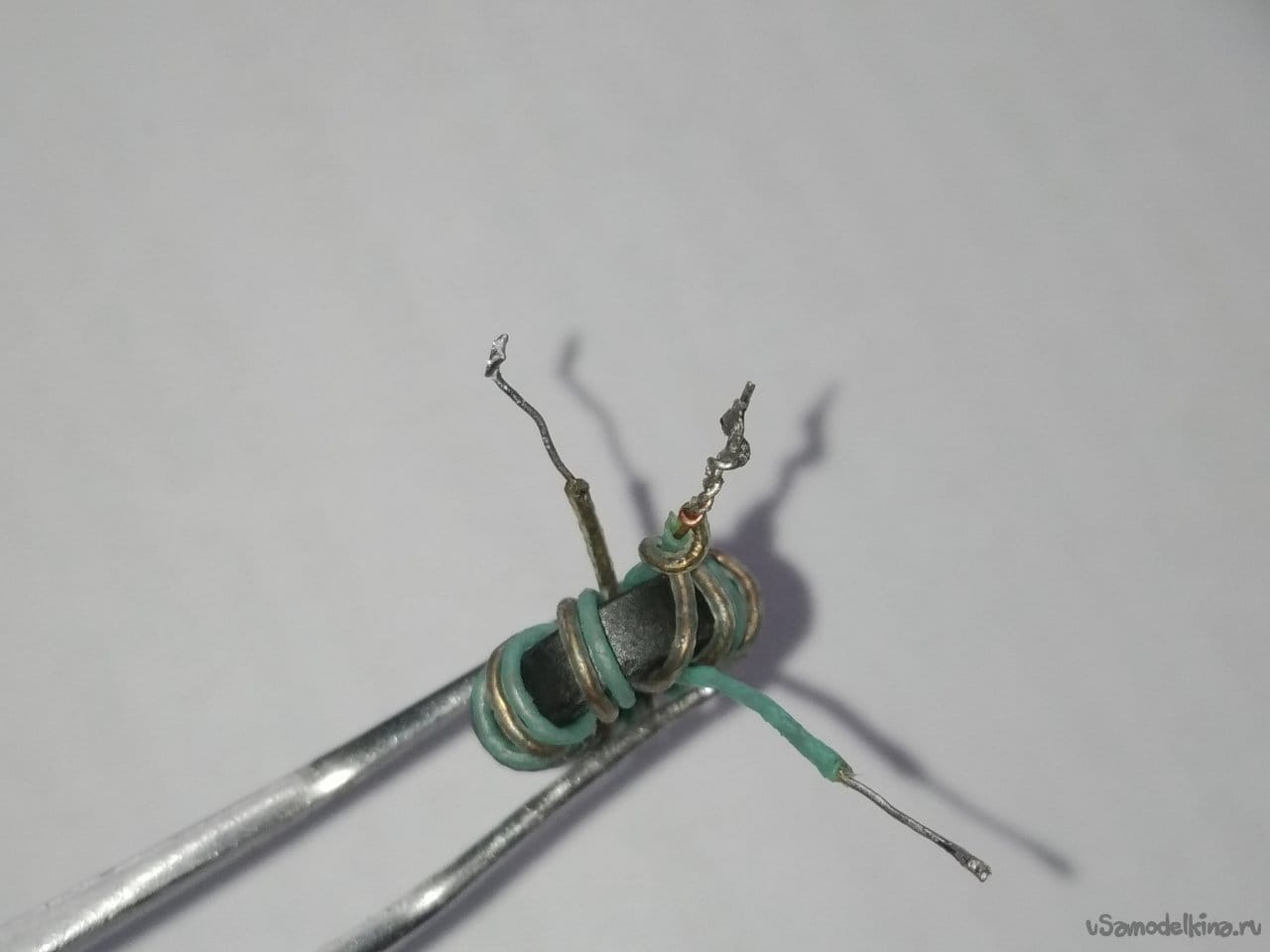 Then I unsoldered all the elements on the board. On the side you can see reed switch , which is responsible for turning on the circuit when the magnet is brought up. 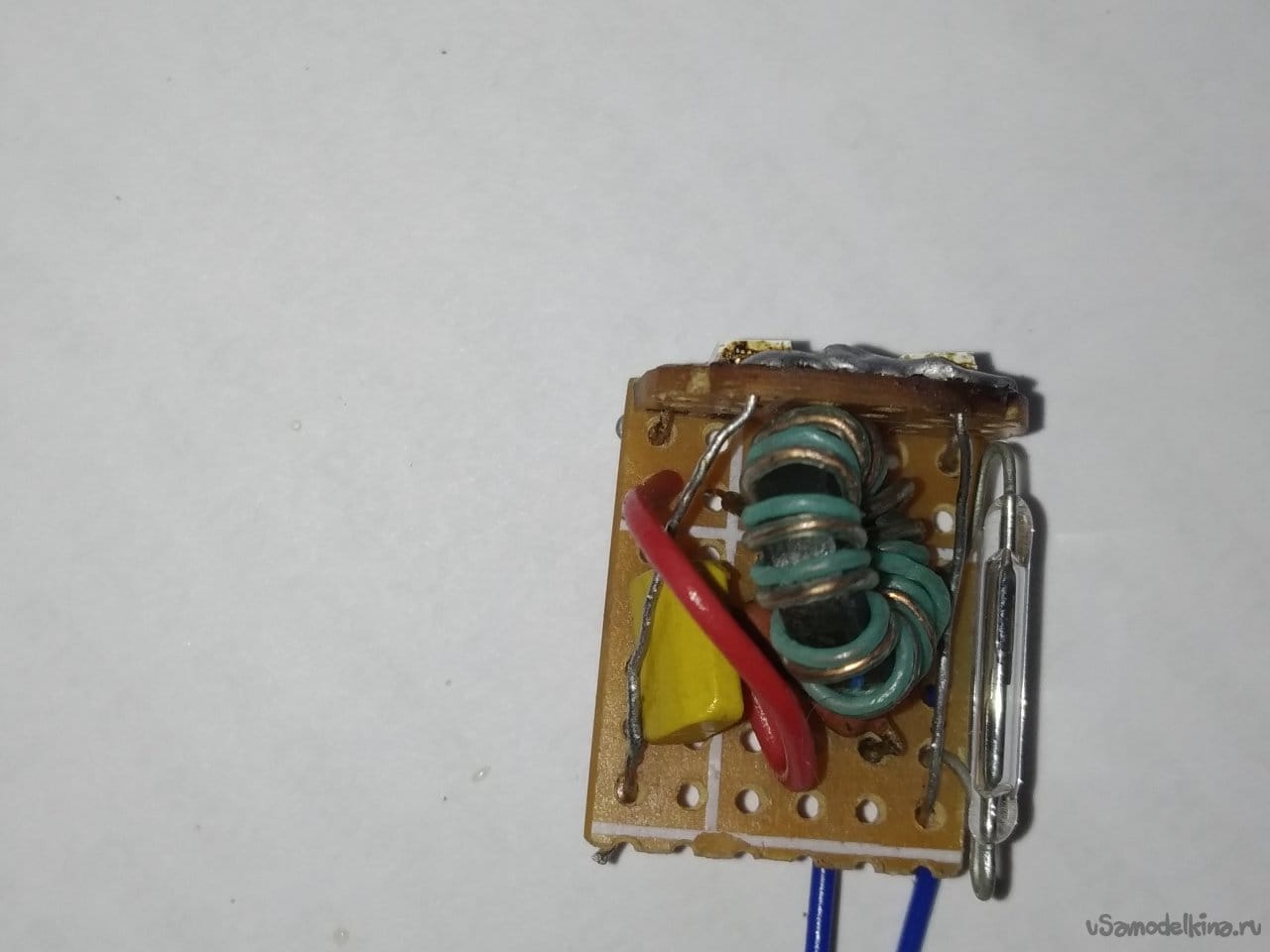 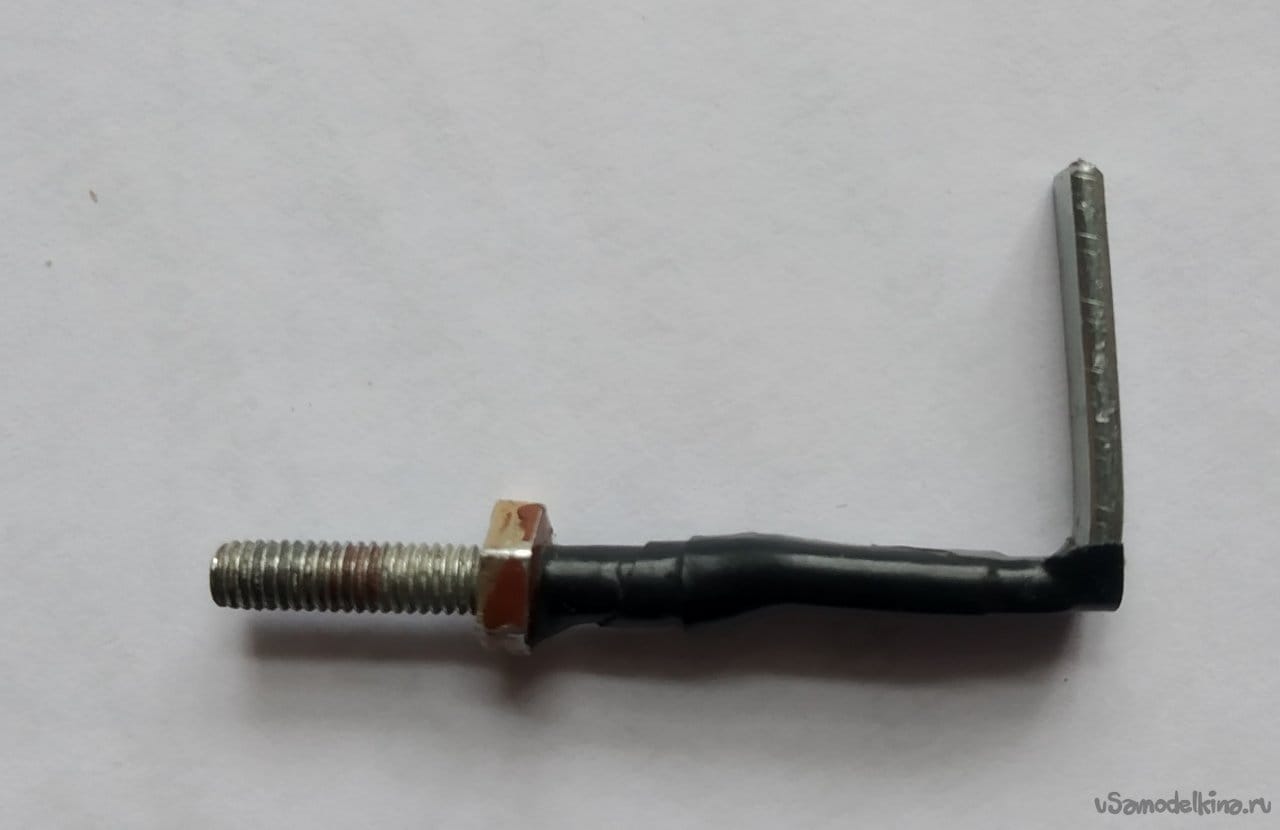 After that, you need to return to the board. I intentionally left the four holes in the front part free. Bending two pieces of copper wire in half, I passed them through these holes.
< img class = "aligncenter" alt = "A sealed flashlight from a syringe and available radio components" src = "https://usamodelkina.ru/uploads/posts/2021-02/1612862599_img_20210208_155900.jpg"/> Then using these segments fastened the board to the screw mount. 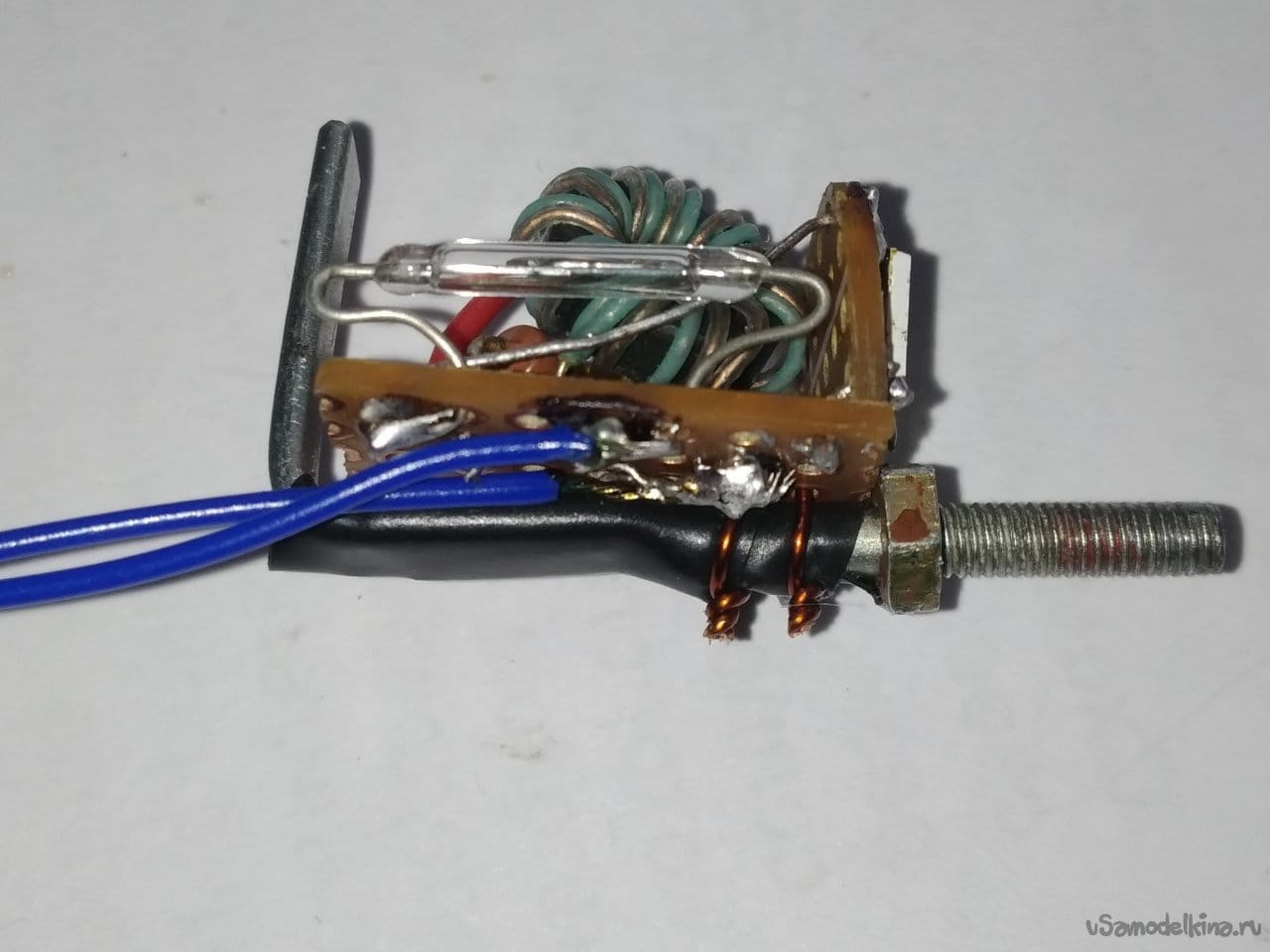 Next, I installed the entire structure inside the syringe and, holding the mount on the side of the battery compartment with tweezers, tightened the nut, under which I placed some paraffin beforehand for a more reliable sealing. 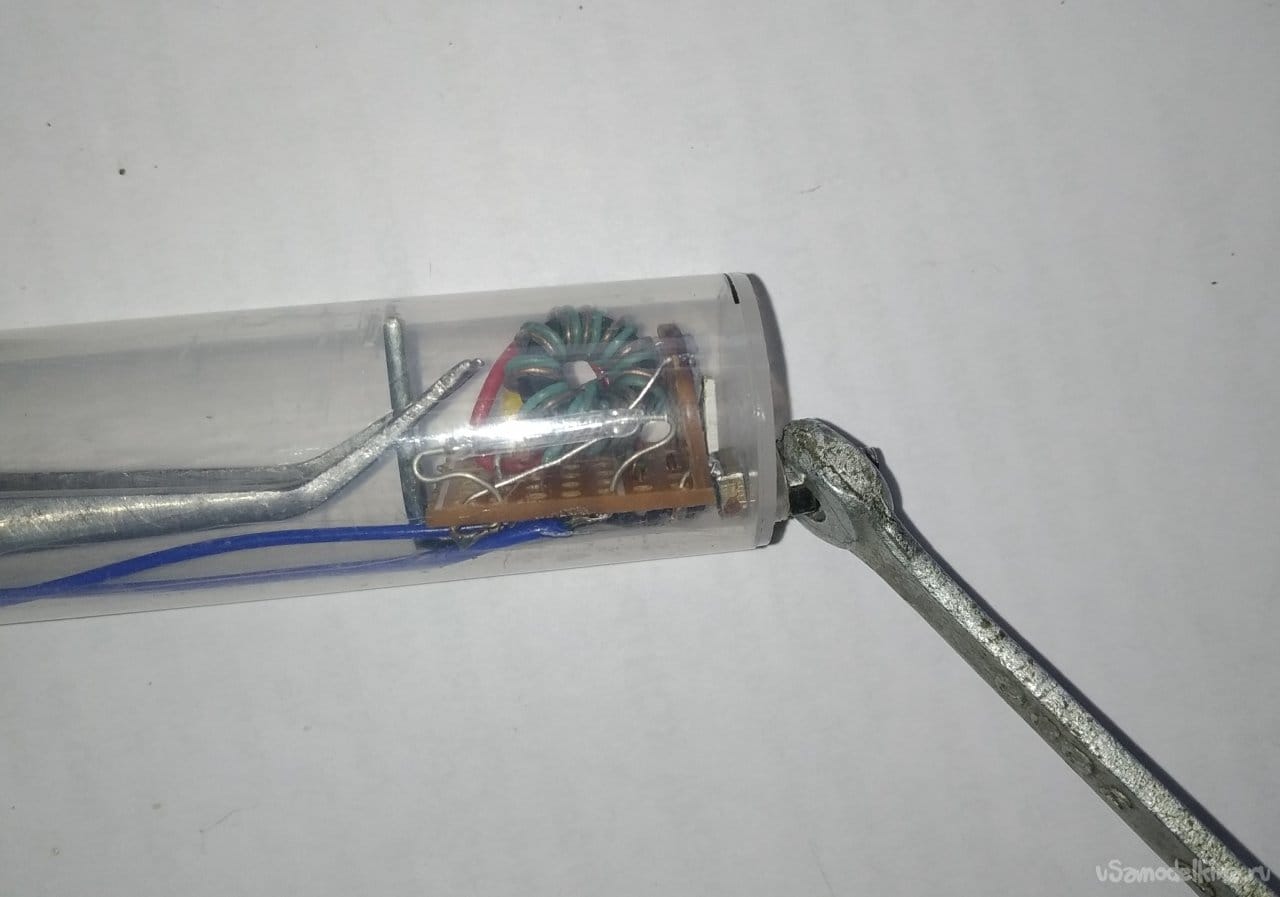 After that, connect the battery. To do this, you can use a special holder, or by soldering metal plates to the ends of the wires, attach them with electrical tape (but this method is not reliable), I did it easier, because I do not use a flashlight often, and the battery will last for a long time, I soldered the wires to it directly and pasted on top tape.
Then I put the battery in the case and inserted the piston. There is a constriction in the syringe barrel that acts as a stop for piston movement. Passing through it, the piston is securely fixed. 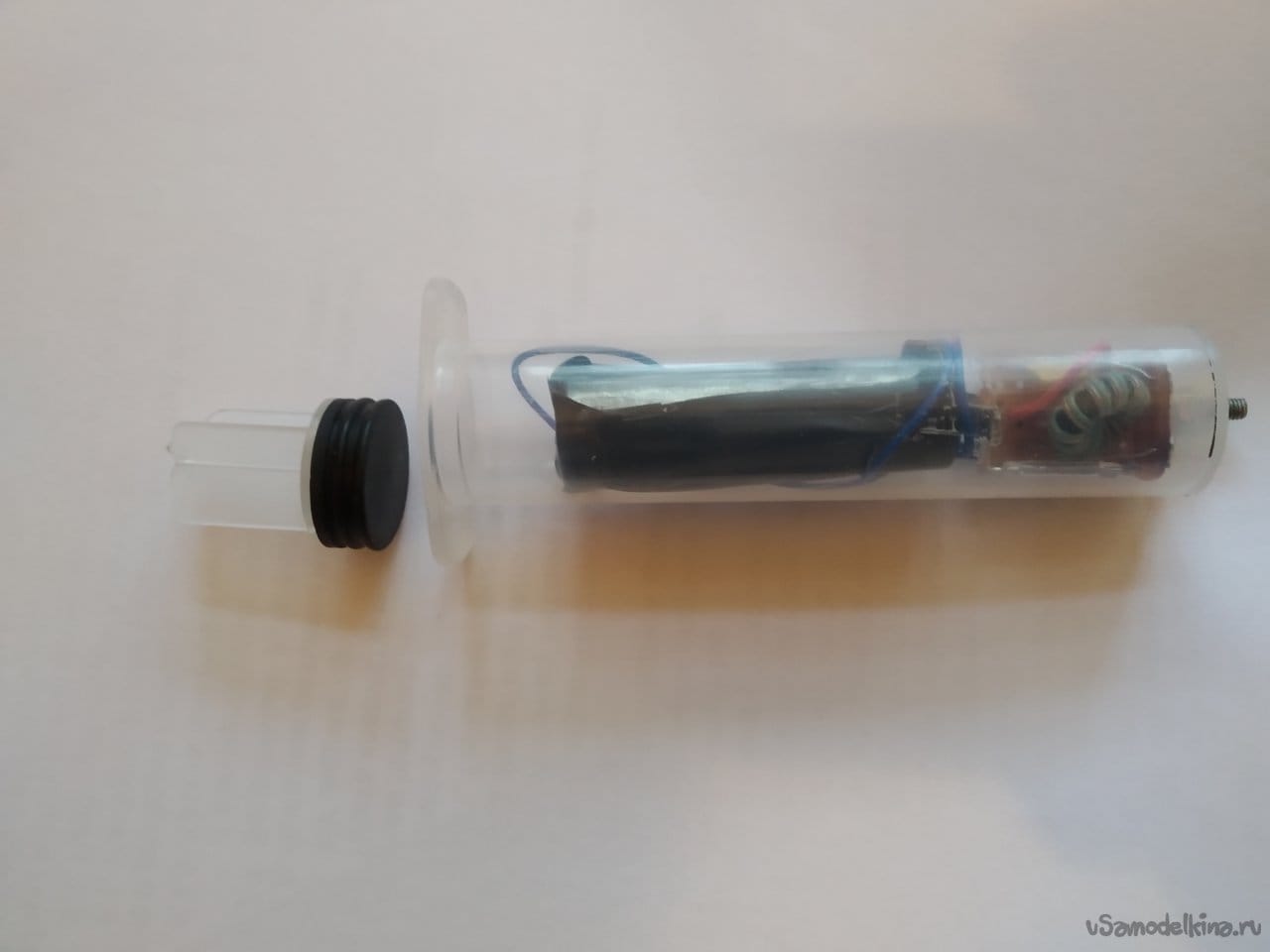 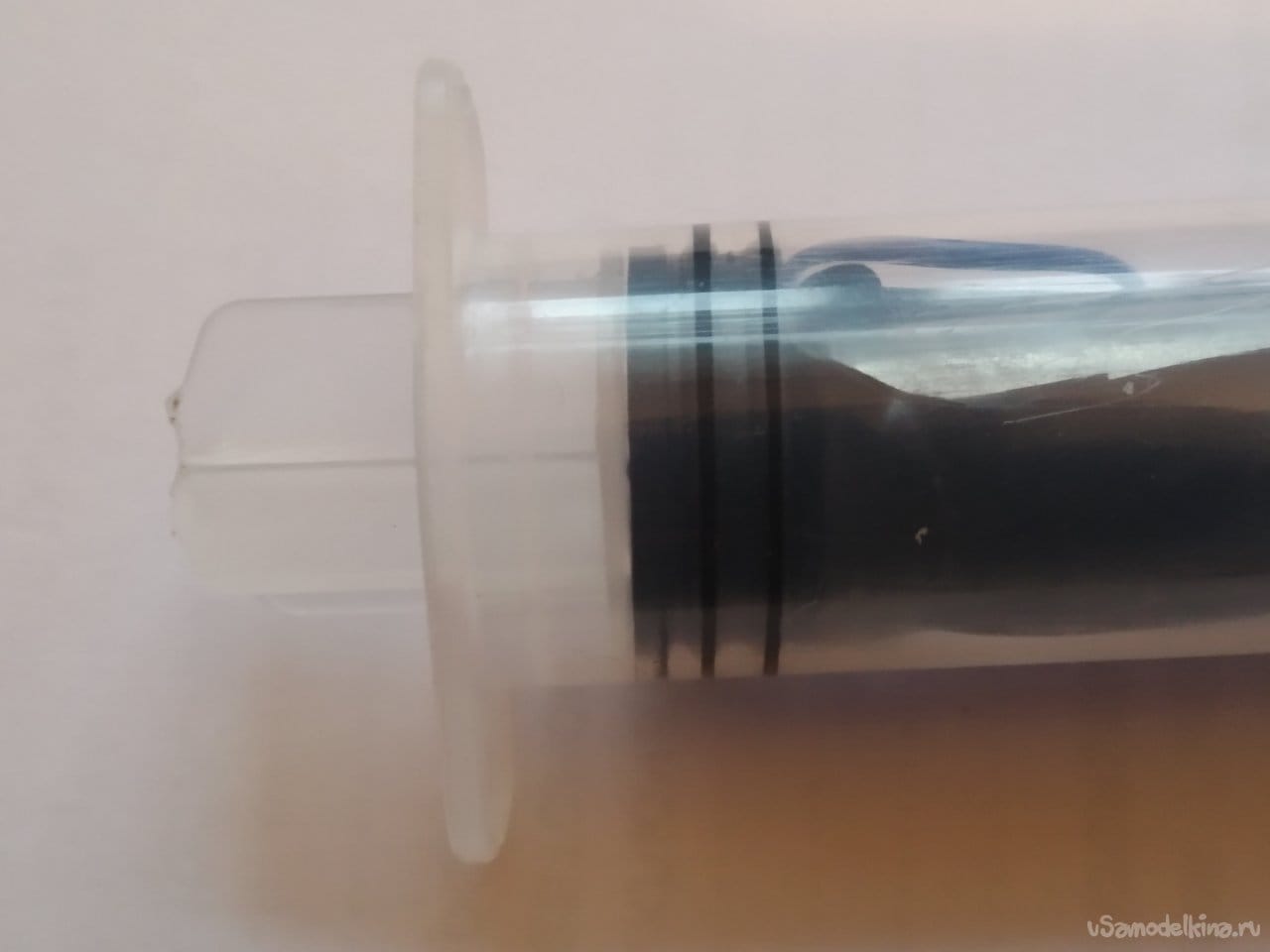 After that you need to make a power button, for this I used a pressure plate for a transistor, a tension spring and a magnet from a motor from a children's toy. 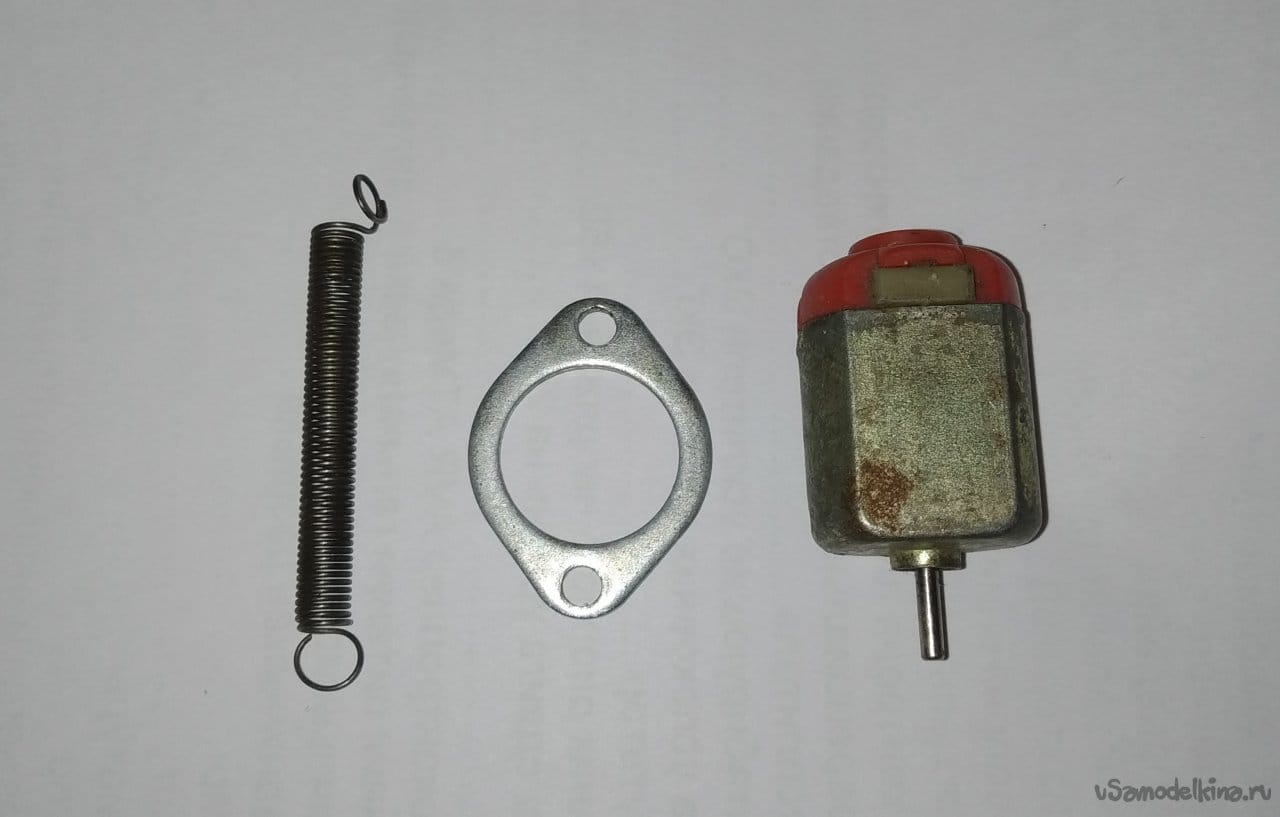 Magnet from such the motor has an arcuate shape due to which it fits well on the surface of the syringe, although its radius is slightly smaller, which does not ensure full adherence. 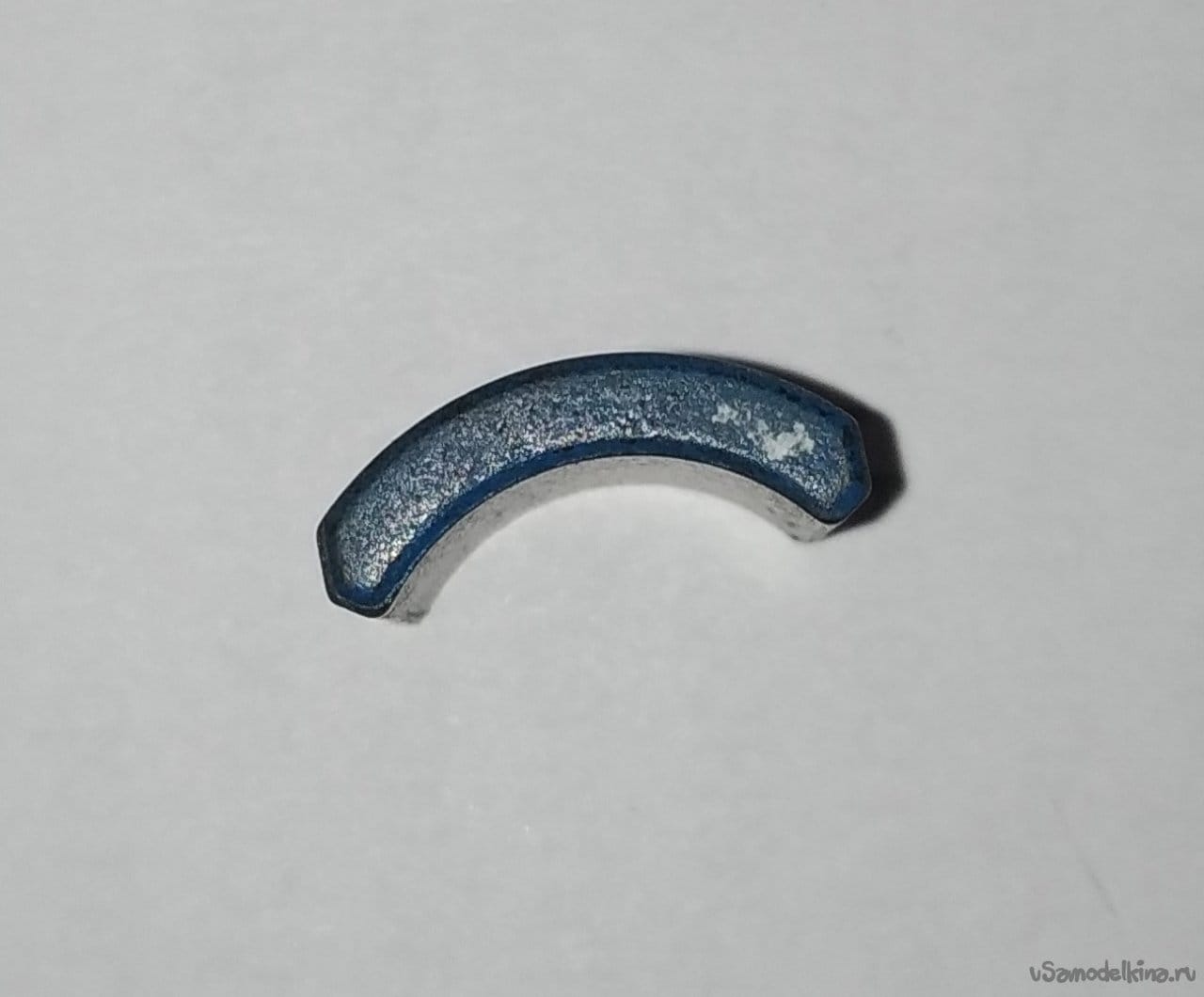 Now you need to connect the spring and the plate. 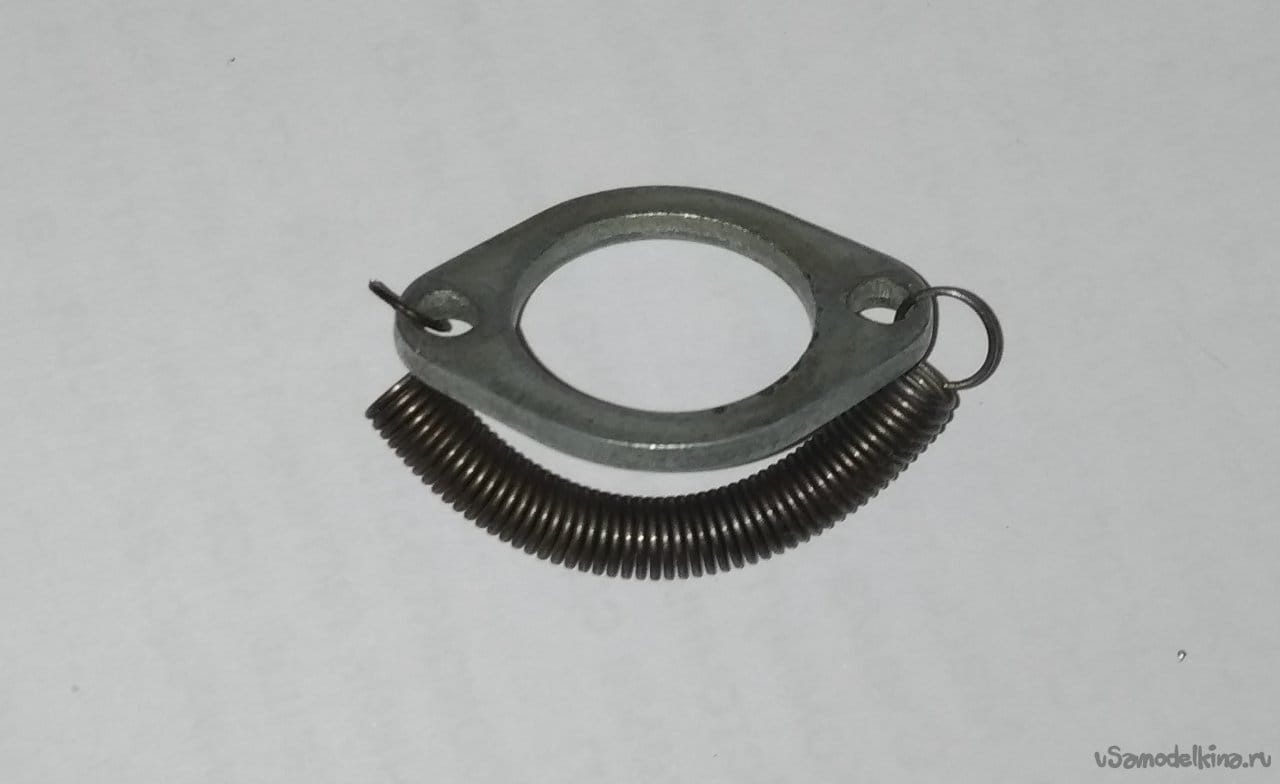 Then the resulting structure should be put on the syringe barrel and a magnet should be placed under the central hole of the plate. 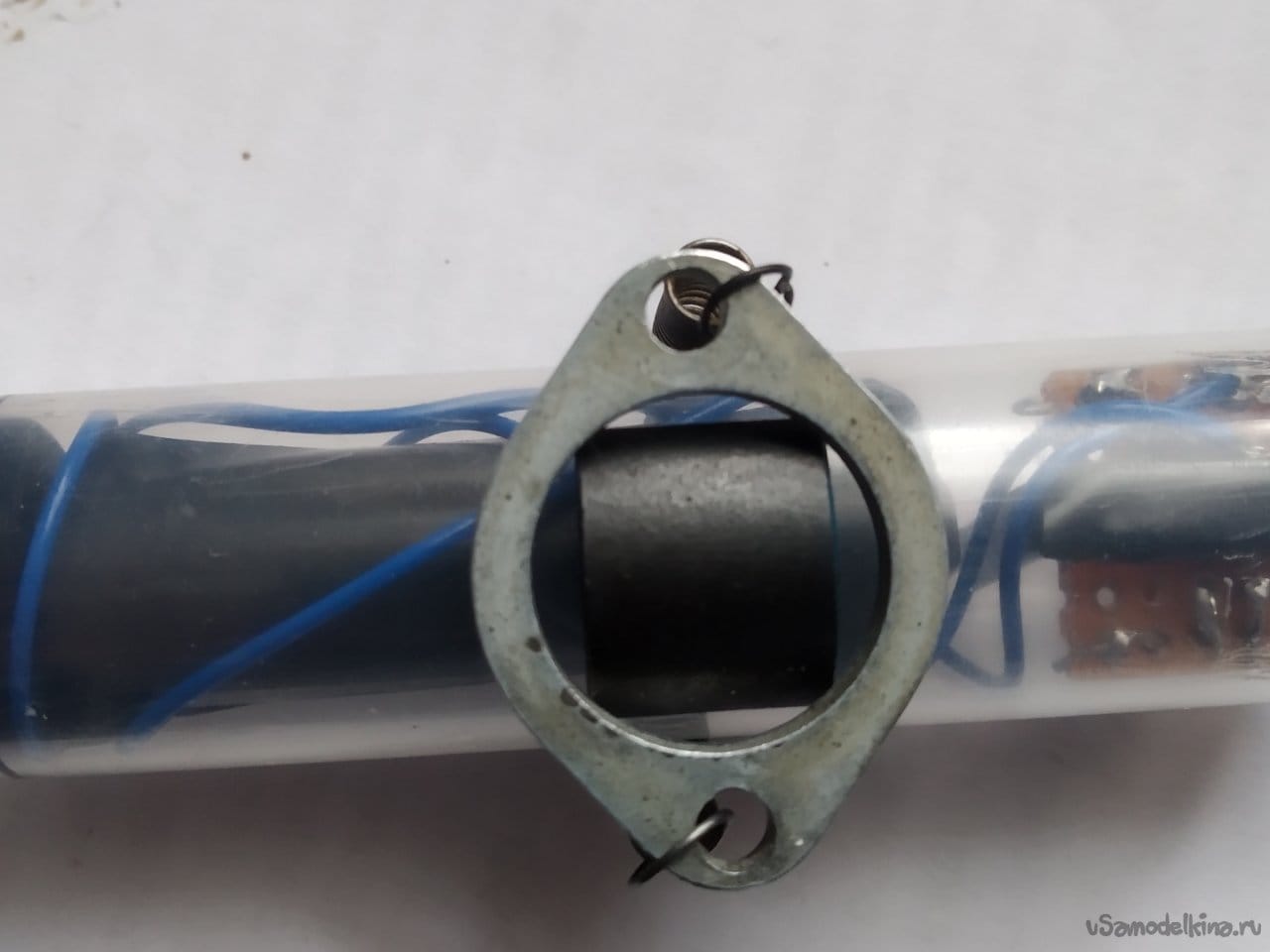 Despite the seeming unreliability, this solution provides a sufficiently high-quality connection between the magnet and the case. Allowing to move it along the cylinder thus closing the reed switch . To prevent the button from being removed while storing the flashlight in your pocket or backpack, it should be moved to the sub-finger protrusions of the cylinder. 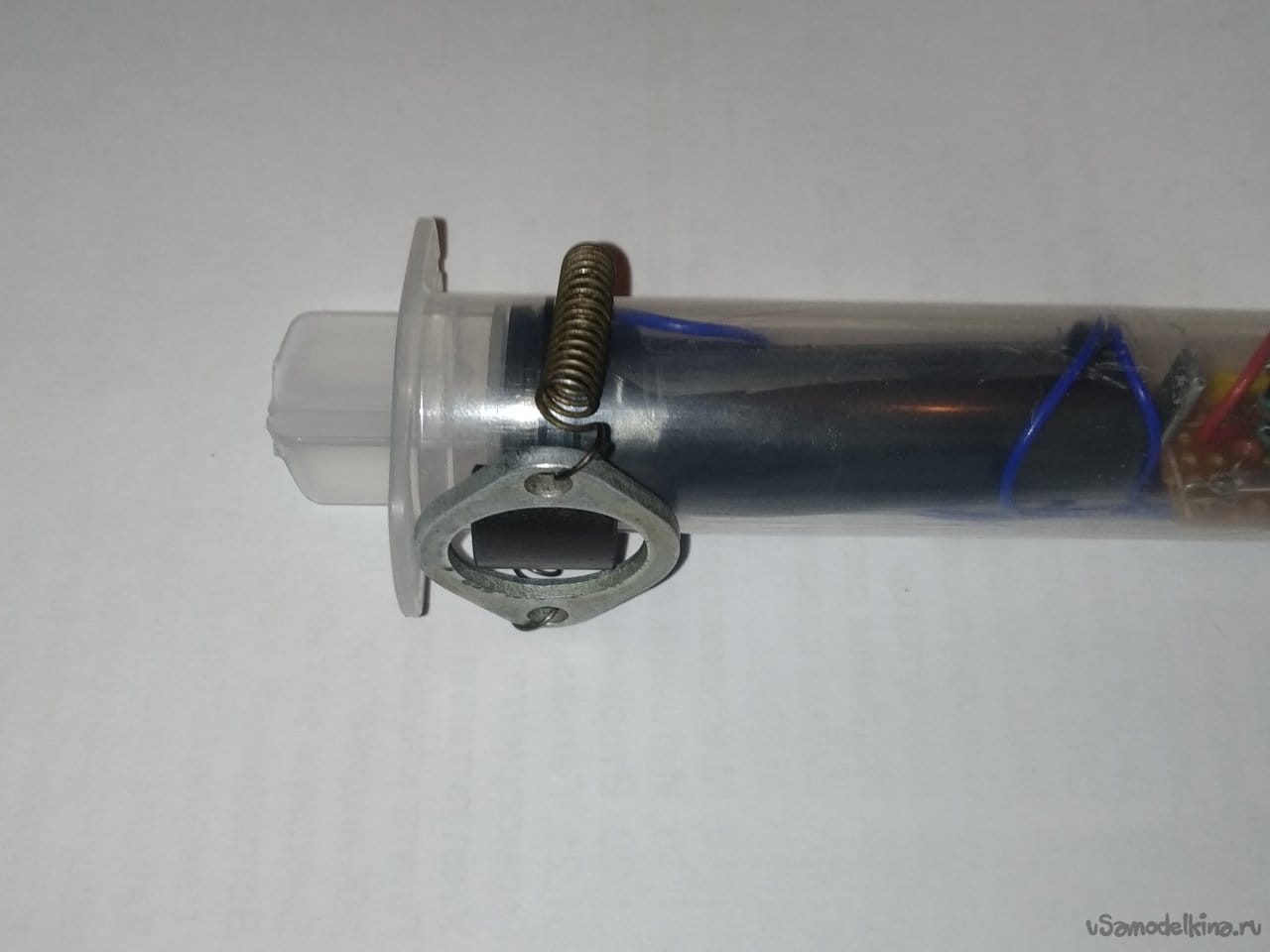 Several photos of the finished products.

Including underwater tests in a basin, the flashlight does not let water through.
An important design feature of the product is the fastening of the internal electronics with just one screw. This solution makes it easy to replace the cylinder-body with a new one, this is important, since syringes are made of a rather soft polymer, which quickly becomes covered with small scratches, which leads to a decrease in its transparency, therefore, impairs light output.