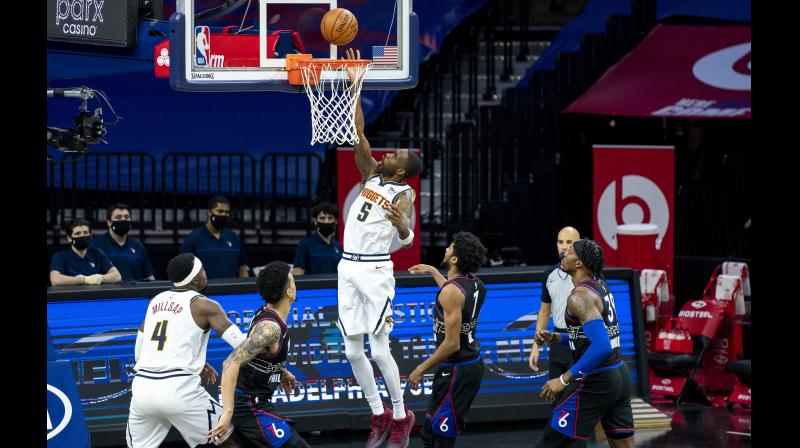 Washington: The Philadelphia 76ers were routed 115-103 by the visiting Denver Nuggets on Saturday, with the team so badly depleted by Covid-19 protocols and injuries that they were forced to dress an injured player.

The short-handed Sixers were down to just seven healthy players, pushing coach Doc Rivers to activate Mike Scott, who had a left knee injury, just so they could meet the league requirement to have a minimum of eight players. Scott sat on the team bench but didn’t play.

The Sixers were missing a number of starters, including Seth Curry, who tested positive for the coronavirus on Thursday.

Because of contact tracing, Covid-19 health protocols and injuries several other stars were also missing including Ben Simmons, Joel Embiid and Tobias Harris.

Before the game, Rivers said he felt it should have been postponed.

Saturday’s game had a chance to be the season’s second coronavirus-related game postponement. The Houston Rockets had their season opener against the  Oklahoma City Thunder postponed because of a combination of positive tests and contact tracing for Houston.

Nikola Jokic had 15 points and 12 assists and Gary Harris scored 21 points to lead the Nuggets.

Jamal Murray and Will Barton had 14 points apiece for the Nuggets, who broke open a close game after halftime. JaMychal Green and Monte Morris added 12 points apiece.

Rookie Tyrese Maxey tallied a career-high 39 points on 18-of-33 shooting, Isaiah Joe added 13 and Dakota Mathias had 12 for Philadelphia, who lost their second in a row and had their 20-game home winning streak snapped.

Cameroonian star centre Embiid was sidelined with back tightness while Australian guard Simmons was out with knee stiffness.

“With the minutes we would have to ask (from Embiid), it would be insane to play him,” Rivers said.

The Nuggets were without Michael Porter, who is in quarantine due to Covid-19 safety protocols.

Elsewhere, LaMelo Ball became the youngest player in NBA history to record a triple-double with 22 points, 12 rebounds and 11 assists, and the Charlotte Hornets beat the Atlanta Hawks 113-105.

The 19-year-old Ball is 177 days younger than Markelle Fultz when he set the triple double record.

Ball shot nine-of-13 from the floor as the Hornets handed the struggling Hawks their fourth straight defeat. Ball was the third overall pick in the 2020 entry draft.

Tim Hardaway also scored 36 points and Trey Burke added a season-high 29 to lead the Dallas Mavericks to a 112-98 victory over the visiting Orlando Magic.

The Mavericks were without forward Dorian Finney-Smith and guards Josh Richardson and Jalen Brunson due to Covid-19 health and safety protocols.

Hardaway made eight of 13 three-point attempts as the Mavericks defeated Magic for the 14th time in the past 18 meetings.