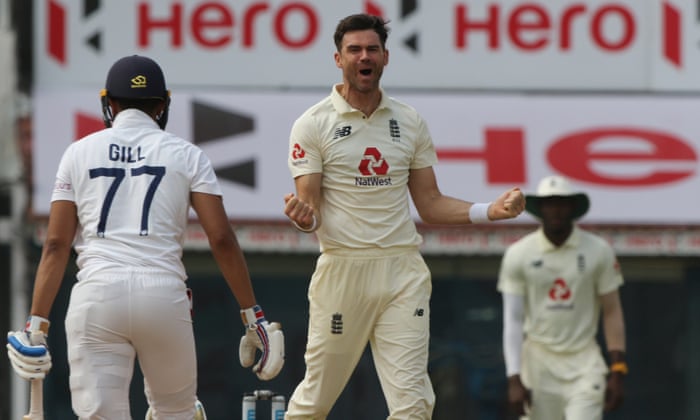 In India, Test matches unfold like bankruptcies – ever so slowly and then all at once. For the first four days, and an hour more of the fifth, Jimmy Anderson was in the background of this game, a bit player. In the first innings he took on the job of bowling tight so the bowlers at the other end would have the freedom to be more attacking.

He slogged through 15 wicketless overs for 45 runs before he polished off the tail. In the second innings, he watched from mid-on, while Jofra Archer and Jack Leach went to work with the new ball. It was the first time in 12 years of Test cricket that Anderson has bowled first change.

His moment came with India 92 for two, Shubman Gill was steady and serene on 51, Virat Kohli had 11 and was just beginning to settle into his work. Anderson’s first ball to Gill was full, started just wide of off until it swung suddenly in. The movement was so sharp, so severe, it felt almost like an optical illusion, as if there had been a glitch in the TV feed. But it was a little too straight, and Gill dropped his bat on it and knocked it across to midwicket. Anderson watched, made the necessary calculations in his head, and turned to come again.

The next delivery was wider and fuller, brought Gill half-forward but whizzed back through the gap between his bat and pad to bowl him.

“I was thinking to get him lbw or maybe caught midwicket,” Anderson said, “but it was nice to see his stumps go cartwheeling – that doesn’t happen very often at my age.”

He enjoyed it so much, he did it again. His first ball to the new batsman, Ajinkye Rahane, passed by wide of off stump. His second swung in and came within in a hair’s breadth of dismissing him lbw and the third came in so wickedly that by the time Rahane snapped his head back to see what had happened, his stump was tumbling away from him.

Joe Root would say this was the best over he had seen an England bowler deliver in the 100 Tests he has played in, the only comparison he could think of was Andrew Flintoff’s to Justin Langer and Ricky Ponting at Edgbaston in 2005.

Anderson’s over, he said, had “completely changed the dynamic of the day”. He was right. From that moment on, it was clear there was no way India were going to bat out the day. Two overs later, Anderson dismissed Rishabh Pant with an artful off-cutter that was caught off the back of the bat as he tried to play to the leg side.

Those few overs contained a lifetime’s worth of expertise. It was not just in the reverse swing, which has always come easily to him (although in the broader sweep, his mastery of it is astonishing given that it was not long ago English bowlers were so confused about how to do). Go back, back, further still, to the first game of first-class cricket Anderson played, for Lancashire against Surrey in 2002, and you will find his first wicket was earned with a deft piece of reverse swing, when Ian Ward was caught behind off a ball that came back across him.

“If you can swing it,” Anderson said later, “then you can reverse swing it.”

He still had to hone that natural talent over the years, to learn what length to bowl (“Once bowlers see it reversing they get stars in their eyes and try to bowl really full, it’s like an ego trip, seeing it reverse at yorker length,” he wrote in his autobiography), and what line (“If you are using reverse swing on pitches on the subcontinent, you might look to bowl more balls that go on to hit the stumps, in England you might bowl more balls that swing away”). And more, like the way he hides the ball in his hands as he runs up, a technique he copied off Zaheer Khan.

By now, that stuff is all second nature to him. He used the same techniques on England’s tour of India in 2012-13, when he bowled Sachin Tendulkar with one that reversed in (still one of his favourite wickets). Which might be why, after the match, he seemed to wonder what all the fuss about. He was only half-joking when put a lot of it down to the fact that he hit a bare patch on the pitch that did most of the work for him.

Listening to him, you wonder if we are looking at the wrong bit of it all. Everyone else is talking about what happened in those four balls, but Anderson finds as much satisfaction in all the stuff that came before it. The slow, thankless passages nobody really noticed, when he played second fiddle to his juniors because it served the needs of the team and waited, uncomplainingly, while Archer and Leach took the new ball – his new ball – on the fifth morning, because he knew that they were better equipped to use it.

That, as with all the best bits of conjuring, we are all busy talking about the trick, but the magician understands that the hard part, the real craft, was in the set-up.